Amy Adams is the actress who found fame falling to Earth as the princess-in-waiting in the 2007 Disney film Enchanted. Now she’s fallen to Earth again — this time landing with a bump — in the West End revival of Tennessee Williams’s autobiographical drama The Glass Menagerie.

As in the film, where she grapples with the hostilities of New York City while wearing a glittery princess dress, Adams enjoys decidedly mixed fortunes, thanks to Jeremy Herrin’s glumly undistinguished production.

Her role is that of Amanda Wingfield, the single mother of burgeoning writer Tom (the Williams character) and his painfully shy, disabled sister Laura, in the St Louis of the 1930s. 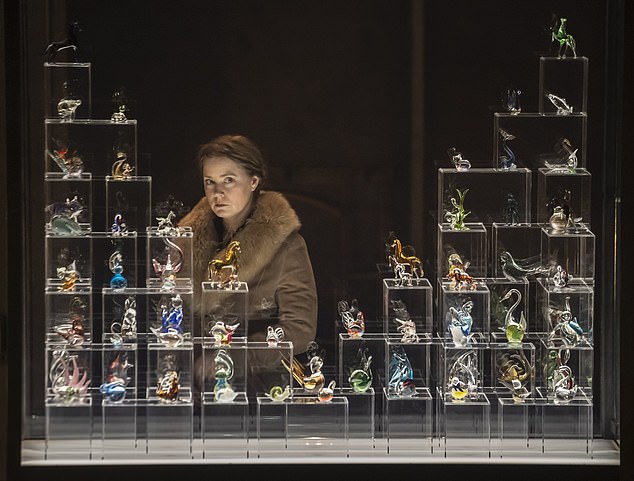 ‘Perhaps initially inhibited by a frumpy brown frock that might better serve as a carpenter’s apron, Adams, in her West End debut, never quite manages to press her personality on the situation’ 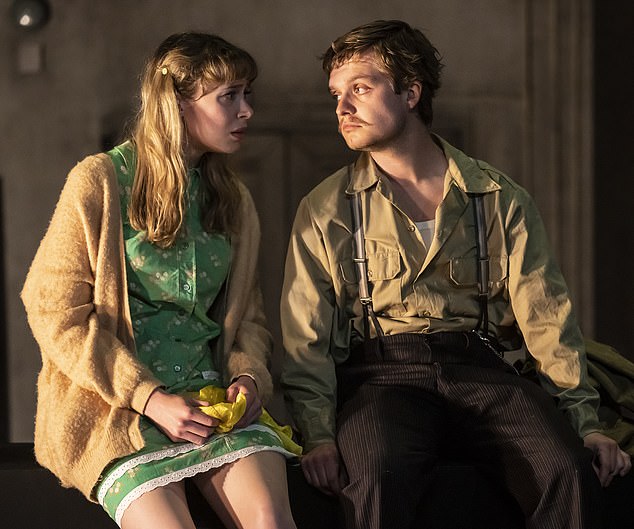 ‘Herrin’s production feels stubbornly immune to the play’s melancholy poetry, which evokes such gorgeous images as ‘eyes like wood smoke in autumn” 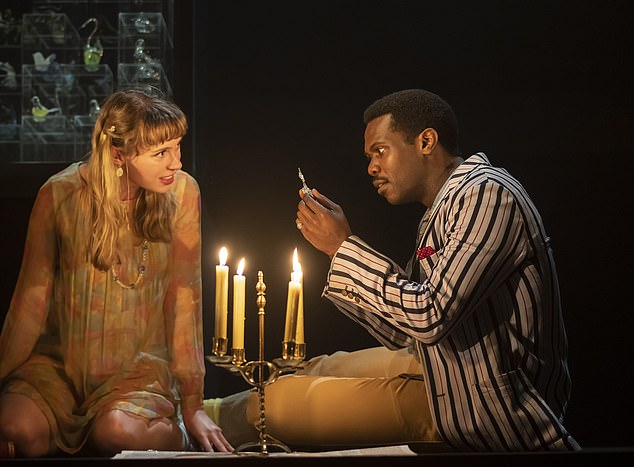 Adams’ role is that of Amanda Wingfield, the single mother of burgeoning writer Tom (the Williams character) and his painfully shy, disabled sister Laura

Abandoned by her husband and fearful for the future of her children, Amanda’s quietly desperate hectoring needs to take charge of the stage — especially in her frantic mission to find a husband for Laura.

Perhaps initially inhibited by a frumpy brown frock that might better serve as a carpenter’s apron, Adams, in her West End debut, never quite manages to press her personality on the situation. Nor does she generate the claustrophobia against which Tom eventually rebels.

She’s too easily dominated by Tom Glynn-Carney as the fiery son who is fed up with his dead-end job at a local shoe warehouse. It’s not until Adams gets to wear a fairytale Southern belle dress in the second half that she seems set free to weave her charms — twirling her gown and flirting with her daughter’s ‘gentleman caller’.

BEST SEAT IN THE HOUSE

Glyndebourne’s 2017 production of Brett Dean’s operatic version of Hamlet is, tomorrow, broadcast live to UK cinemas from the Met in New York, with British tenor Allan Clayton in the title role.

Until then, Herrin’s production feels stubbornly immune to the play’s melancholy poetry, which evokes such gorgeous images as ‘eyes like wood smoke in autumn’.

The most magical feature of Vicki Mortimer’s set is the museum display cabinet for Laura’s titular zoo of animal figurines. Otherwise, the stage is besieged by a clutter of lights and furniture, beneath a huge screen showing clunky projections of symbolic images including a lovers’ crescent moon. One particular faux pas even has the fastidious Amanda sitting on her kitchen table — and that ungainly prop is, anyway, a charcoal-black cage, later relieved by a linen cloth.

Adams faces competition from Lizzie Annis’s unusually vigorous Laura, who, despite being a shrinking violet, towers over her mother as if about to swallow her up.

Annis, who has cerebral palsy, is also making her West End debut, and is the first disabled actor I’ve heard of playing this role in a major production. And a very assured debut it is, too. Racked by acute embarrassment, she is sweetly teased from her shyness by Victor Alli as the gentleman caller. It’s a lovely intimate scene, where they seem briefly made for each other as Alli’s warm condescension allows her — and us — to dream for a moment.

As Laura’s brother, Glynn-Carney is angry, boozy and less forgiving in his boorish treatment of his mother. Yet it’s a role where we also need to feel his character’s guilt. Thankfully, Paul Hilton secures the play’s sentimental through-line as the older Williams who, acting as narrator, patrols the stage like a vagrant and seems to conjure up the action.

Hilton also has a subtler feel for the agonies of Williams’s dreamy vernacular — including one line about how ‘time is the longest distance between two places’. That one always chokes me up.

Hail, Nero! A spinning top of rage and reason

Agents and acting scouts should head to Hammersmith, to behold a fine selection of emerging talent.

The occasion is Timberlake Wertenbaker’s adaptation of Jean Racine’s French tragedy Britannicus, about the Roman Emperor Nero’s infatuation with his brother’s lover, Junia. A prototype Ryan Giggs, you might say.

Told in a daisy chain of lofty rhetorical speeches over one hour and 40 minutes (without an interval), it’s certainly a challenge to modern attention spans, demolished by TikTok.

There is, however, a stunning turn by William Robinson that put me in mind of a young Derek Jacobi. His Nero, clad in designer sportswear, is a specialist in unhinged mood swings, oscillating between reason and tantrums without ever lapsing into parody. 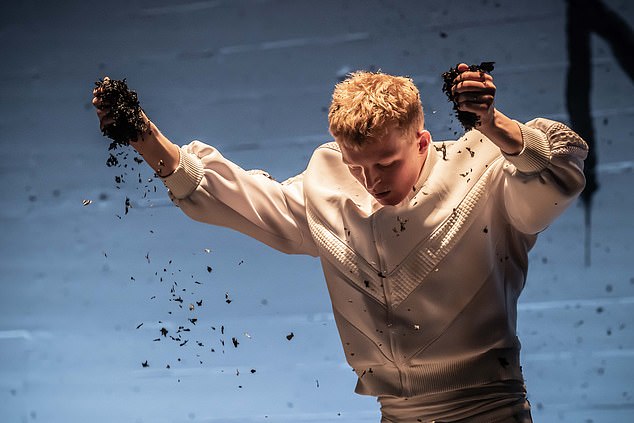 ‘His Nero, clad in designer sportswear, is a specialist in unhinged mood swings, oscillating between reason and tantrums without ever lapsing into parody’

There are great performances, too, from Sirine Saba as Nero’s power-crazed mother Agrippina, who starts as a cold wind and erupts into a full-blown tempest.

And as the object of Nero’s ardour, Shyvonne Ahmmad invests her character’s virginal purity with emotional ferocity.

The other star is director Atri Banerjee, whose ceremonial production combines a water cooler, palatial carpet and huge tapestry of the founders of Rome, Romulus and Remus, suckling on a she-wolf. Designer Rosanna Vize is another name to watch.

Rattling movements performed by the cast between scenes, as if trapped on a dangerously rickety train, are a little outré. And the severe tone of the play may be seen as insufficient reward for our patience. But there’s also much to admire.

Similarly hard work is Girl On An Altar in Kilburn. Inspired by the first part of Aeschylus’s ancient Greek revenge drama, The Oresteia, it tells of the warrior Agamemnon returning home from Troy where his wife Clytemnestra is waiting to kill him, for sacrificing their daughter Iphigenia.

Reliably bleak Irish writer Marina Carr has got hold of this and turned it into an absorbing two-and-a-half-hour dirge, imagining how Agamemnon and Clytemnestra must have felt about it all. It’s a very modern question that’s a long way from the ancients’ world interest in barbarous moral dilemmas.

Immersed in a black dungeon of a set with angular lighting, there is nonetheless a primal force underpinning Annabelle Comyn’s earnest, blood-spattered production. In particular, Eileen Walsh’s Clytemnestra is sinuous and proud, more desolate with grief than vengeful.

As her husband, Agamemnon, David Walmsley is an impressively ripped Scouser — a kind of Wayne Rooney with gravitas.

We know whodunit. But Poirot is a surprise

We all know whodunit on the Orient Express. So why do it again?

Possibly because Agatha Christie’s 1934 novel has never before been staged, so it is an excuse to treat the good burghers of Chichester to a lavish, old-fashioned period piece with costumes to die for.

Director Jonathan Church and stage adaptor Ken Ludwig have another intention: the reinvention of the famous little Belgian detective as not just ‘a walking brain’ but a man with a soul.

This production begins with a little girl being tucked up in bed by her devoted nanny. Aww! Then the figure of a man appears in her room and her chilling screams turn your blood to ice.

Cut to Istanbul where passengers are gathering in the railway cafe, failing to recognise Hercule Poirot, dismissing him as a ‘funny little man’ with a ‘silly moustache’. 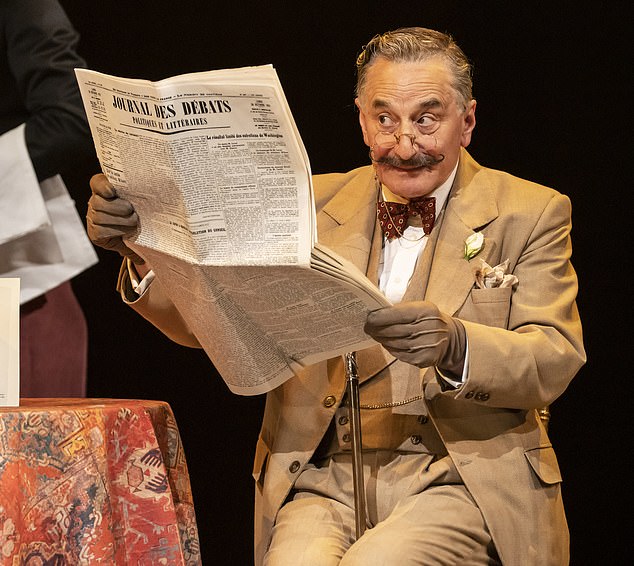 ‘We all know whodunit on the Orient Express. So why do it again?’ 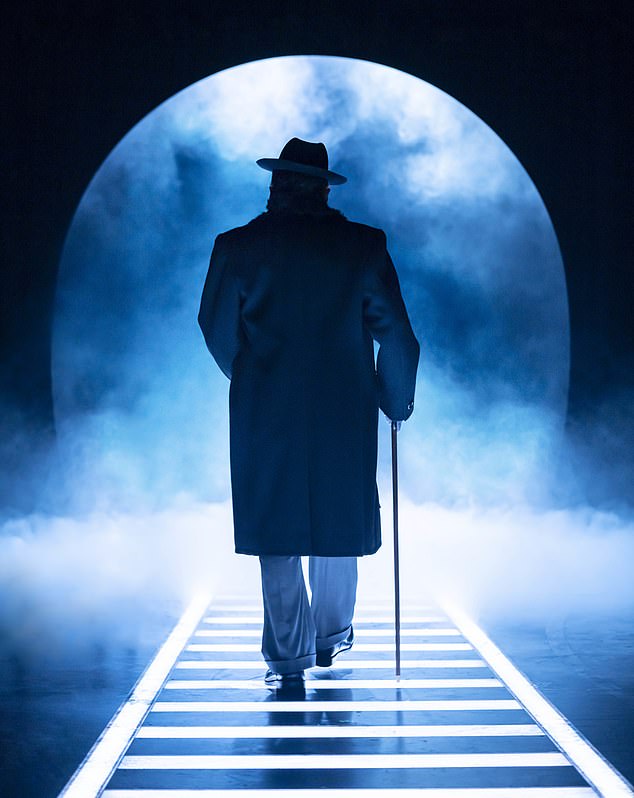 ‘At the end, having solved the mystery, Goodman’s Poirot weeps and wonders aloud if he did the right thing’

We are all aboard the legendary luxury train racing through a snowstorm, getting to know the suspects. In the past, the unmistakable moustache has been unforgettably sported by Albert Finney, Peter Ustinov and David Suchet. Henry Goodman’s dapper Poirot wears his well.

His Poirot also undoubtedly has the piercing instinct for truth and lies required for solving ‘the most difficult’ case of his career.

Indeed, a stranger to self-deprecation, he cheerfully proclaims his own genius and seizes every opportunity to display his intimate knowledge of Shakespeare’s plays. ‘The time is out of joint,’ he declares, sniffing a tension in the air.

But, much more significant, Goodman’s Poirot has an intense moral sensibility. ‘Angels and ministers of grace defend us!’ he says, again quoting from Hamlet while also revealing his own faith and troubled soul.

At the end, having solved the mystery, Goodman’s Poirot weeps and wonders aloud if he did the right thing. Wrestling with his conscience makes sleep impossible. A haunting reinterpretation, handsomely done.

After Chichester, the Orient Express will call at the Theatre Royal, Bath, from June 9 to 25 (theatreroyal.org.uk).

The Dance Of Death (Ustinov Theatre, Bath; then touring)

Verdict: Till death us do part

‘HATRED and love! The same source of energy,’ wrote the thrice-married playwright August Strindberg. In The Dance Of Death, his portrait of marital hell, these burning passions appear to be so tightly entwined they cannot be separated.

Failed army captain, Edgar, and Alice, an actress before she became his wife (played by real-life married couple Hilton McRae and Lindsay Duncan, in perfect synchronicity) live in not so splendid isolation on an island, hating and hated by their neighbours and servants. Outside, waves lash and lighting strikes. It’s like a permanent Covid lockdown.

They consider opening some wine. ‘What we have got?’ asks Edgar. ‘F**k all,’ replies Alice. ‘Is that a French region?’ jokes her husband. ‘We’ll be dead soon,’ he adds gloomily. ‘Do you promise?’ she says, with a teasing smile. So they play cards instead.

They have some things in common: foul mouths, which sound jarringly contemporary in a nineteenth-century sitting room, and a bitterly cruel sense of humour, which have fuelled the marriage for 30 long years.

The marital war games played by Albee’s Martha and George and Coward’s Amanda and Elliot are more compelling and much funnier.

In Mehmet Ergen’s stiff and disappointingly bloodless production, Strindberg’s duo have a near ghostly quality, going through the motions of this deathly dance with a soulless precision and control, leaving their emotions locked up elsewhere.