The members of the populer TikTok collectives Hype House and Sway House are always intermingling. Sure, this has led to both houses being embroiled in drama, but a lot of positive friendships and romantic relationships have come to fruition between the two as well. For example, former Hype House member Dixie D’Amelio dated multiple Sway members within the past year. Those guys, Griffin Johnson and Noah Beck, were friends, and have managed to keep things amicable after dating the same girl. That being said, if you look deeper at the timeline of Dixie D’Amelio’s relationships with Griffin Johnson and Noah Beck, things seem a little more murky than everyone involved has let on.

D’Amelio and Johnson called it quits in July 2020 after dating for four months, and soon after, she moved on with Beck. D’Amelio only recently confirmed she’s dating Beck, but as of October 2020, the TikTok star is already calling it love. On the most recent episode of her YouTube show, The Dixie D’Amelio Show, she interviewed Jaden Hossler, who asked if she "loves" Beck, and she didn’t miss a beat in saying yes.

The most interesting part of it all? Beck and Johnson are (or at least were) friends, though, if there’s been any type of fallout, they’ve managed to hide it well. Here’s everything you should know about D’Amelio’s relationship with both Sway House members, from the beginning to the breakups, and everything in between.

D’Amelio and Johnson first gave fans a dose of cuteness on Feb. 26 when they lip-synced to Jaden Hossler’s song "Comatose" and got real close. Johnson sang the lyrics into D’Amelios ears, making her giggle throughout the entire clip. 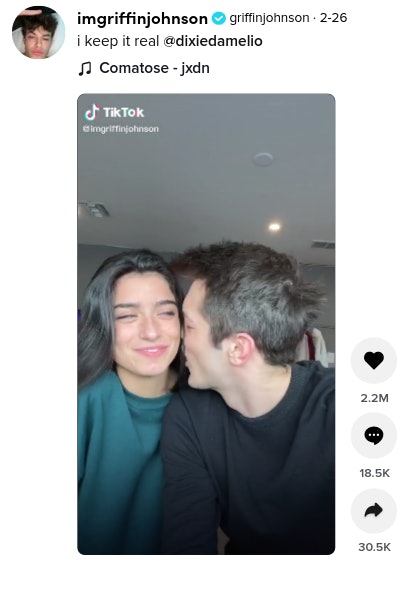 On March 3, Johnson dropped a hint there was something a little more going on between him and D’Amelio with a flirty comment. He dueted a TikTok video D’Amelio previously posted, writing, "watching Dixie like." 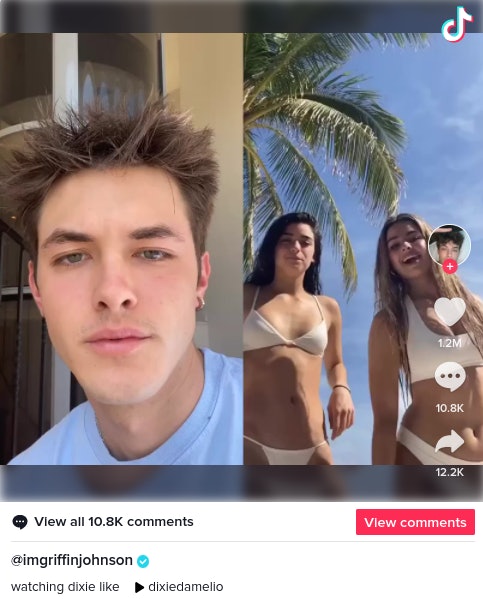 By March 4, they turned things up a notch on Instagram, with Johnson posting a now-deleted pic with D’Amelio and captioning it with a heart. Just a few days later, on March 9, Johnson showed his devotion to D’Amelio when he was by her side after she got her wisdom teeth taken out.

April 2020: Johnson Lets Fan In On Their Sweetest Moments

By April 1, Johnson and D’Amelio had created so many memories together that he had a whole reel of his then–rumored girlfriend to share with fans.

May 2020: Johnson & D’Amelio Hit The Small Screen Together

On May 20, D’Amelio and Johnson co-starred in the Brat YouTube show Attaway General. They played love interests, which clearly didn’t require much acting on their part.

Speaking with YouTuber Matty Smokes on June 12, D’Amelio opened up about what it was like dating a member of the Sway House. "Is it weird dating somebody in the Sway House when you’re from the Hype House?" the YouTuber asked.

"Well, I’m no longer part of the Hype House, but we’re all friends," she said. "I feel like I could bring both groups together." She may have been playing coy, but she also didn’t rebuke Smokes’ suggestion she was dating Johnson.

In the end, it was D’Amelio and Johnson’s friend who spilled the beans on their relationship. While chatting with paparazzi on June 24, he made it very clear where they stand. "Yeah," he firmly replied when the paps asked if D’Amleio was dating Johnson. You can see a video of the moment courtesy of TikTok Shade Room below.

Fans’ excitement over the confirmation of D’Amelio and Johnson’s relationship was short-lived. By the end of July, the pair went their separate ways, and D’Amelio unfollowed Johnson on Instagram.

While the couple never disclosed what exactly drove them apart, on July 6, Chase Hudson called Johnson out for cheating on D’Amelio. Around the same time, however, she directly addressed the cheating rumors in an interview with Jeff Wittek, assuring him there was "no cheating."

August 2020: D’Amelio Finally Speaks Out About The Split

On Aug. 2, D’Amelio let fans know she and Johnson were donezo. "Hey, so we actually broke up, but I had this video scheduled for today so I’m posting it anyways," she said in a YouTube video titled "My Late Date with Griffin."

Three weeks later, D’Amelio was spotted having dinner with Beck on Aug. 22, but vehemently denied they were dating when paparazzi asked. The paparazzi told the stars that they "make a beautiful couple," but D’Amelio wasn’t falling for his tricks. "Couple of besties!" she replied.

At the top of September, D’Amelio denied dating Beck once again. "We’re honestly just friends," she told paparazzi. "Yeah, I’m just taking time to myself right now. That’s pretty much it." The paparazzi also asked if she thought Beck was breaking "bro code" by talking to her, which D’Amelio assured him was not the case.

That same week, Johnson posted a public apology for his treatment of D’Amelio, and appeared to admit there was infidelity in their relationship. "I want to publicly apologize to Dixie for the hurt that i have caused," he wrote. "I am human, I am not proud of some of my choices."

When paparazzi approached Johnson on Sept. 17, he once again addressed the drama. When asked whether he saw D’Amelio’s "Be Happy" remix music video teaser in which she kissed Beck, Johnson said he had not, but that he’s "happy for them."

The next day, it was Beck’s turn to address the dating rumors. "It’s called a music video," he told paparazzi when asked about this kiss on Sept. 18.

D’Amelio officially released her music video for the "Be Happy" remix on Sept. 20. In it, Beck plays her love interest, and the scenes of them cuddling on a beach had fans going wild with theories about their IRL romance.

Ironically enough, the same day D’Amelio released her remix video, Johnson released a song of his own, called "Convenient." The track is all about a messy breakup, and the pointed lyrics had fans guessing it was aimed at D’Amelio and Beck.

In one verse, he sings about cheating accusations:

You can hear the song in full below.

Despite their frequent attempts to deny any kind of romance, D’Amelio and Beck weren’t fooling anyone when fans realized his cell phone background was a photo of them kissing. TikTok Room shared the evidence on Oct. 4.

"Dixie is amazing, she is an awesome girl. It’s been really fun, and so I’m excited for the future with her," he said.

As of November, D’Amelio and Beck definitely aren’t sweeping their romance under the rug any longer, and TikTok nation is shipping all the way.

In Elite Daily’s It’s Complicated series, we dissect the biggest celebrity drama to find out what happened in front of the camera, behind the scenes, and everywhere in between. Read more here.

Is Miley Cyrus a Vegetarian? Her Comments About Meat Suggest Otherwise