The royal family got together for a major Jubilee event this morning, gathering en masse at St Paul’s Cathedral for the Queen’s Service of Thanksgiving. And while the Queen herself wasn’t there, this was a very public reunion for Meghan Markle, Prince Harry, Kate Middleton, and Prince William.

Despite reports that the royals gathered for a post-Trooping the Colour lunch yesterday, insiders tell Page Six that Harry and Meghan didn’t see William and Kate. Meanwhile, they also appear to have kept their distance at today’s event: not only did they arrive separately, People notes that William and Kate are sitting on an entirely different side of the aisle from Meghan and Harry. The Cambridges are in the front row on the left of the below photo, while the Sussexes are in the second row on the right—next to Princess Eugenie, Princess Beatrice, and their husbands: 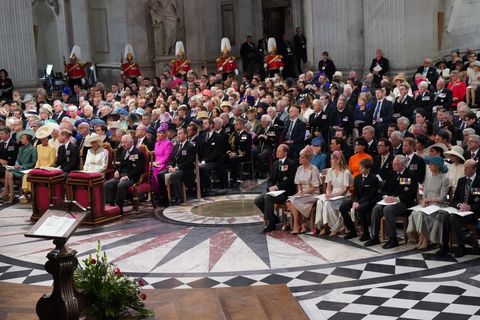 While Page Six reports that Wills and Harry still have a frosty relationship and have zero plans to hang out during this weekend’s events, an insider who spoke to The Mirror had a slightly more optimistic report, saying the brothers have been texting and FaceTiming, “which has allowed them to re-bond.” As their source put it: “William sees that Meghan is a good mother and loyal wife and he is genuinely pleased for his brother. It seems that the two of them have healed the rift and are very much back on their old buddy terms. Meghan’s distance from Kate has also helped heal the friction bet the two men.”