The Real Reason Reba McEntire Got Rescued From A Building

Reba McEntire has survived two close calls in 2021 already, so we’re hoping that the rest of the year isn’t as rocky for the “Little Rock” singer. During a TikTok live stream in August, she told her fans that both she and her beau, Rex Linn, had contracted breakthrough cases of COVID-19 after getting vaccinated. “This has been a hard year and it’s getting rougher again,” she said, via CNN. “You guys, please stay safe.”

However, a few weeks later, McEntire appeared on “Talk Shop Live” and gave fans an update on her health scare. She told Nancy O’Dell that she later found out that the symptoms she had experienced were from a different respiratory illness. While her first COVID test came back positive, a second test for COVID antibodies was negative. “The nurse that came and tested me for my antibodies said that I probably had the RSV virus,” she said, via People.

During her earlier livestream, McEntire advised her fans to “Stay home,” but she didn’t heed her own advice when she toured a historic building with a small group of people on September 14. There was, indeed, “life out there,” and she’s lucky that it included firefighters with ladders. 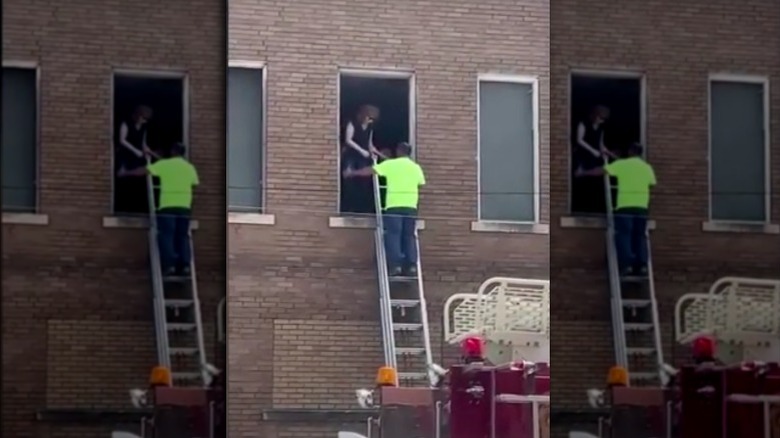 Reba McEntire, 66, was inside a 100-year-old building in Atoka, Oklahoma when disaster struck. She, her boyfriend Rex Linn, and five other people were touring the structure, per KTEN News host Lisanne Anderson. The stairwell between the second and third stories collapsed while some of them were on upper levels, leaving them trapped inside. “Oh it was pretty scary, I was worried about who was downstairs and how bad it was,” one member of the tour group, Coby Scherrill, told KXII. Scherrill also said that the staircase “seemed weak” when they were using it.

Luckily, only one person had to be hospitalized with minor injuries. McEntire was trapped on the second floor until the local fire department arrived at the scene. Video footage of her rescue shows the singer slowly making her way down a ladder propped against the side of the old brick building. A firefighter standing a few rungs below her carefully descended with her to make sure that she made it down safely. Once she was on the ground, someone threw what appeared to be a patterned scarf down from the window, and a woman standing beside McEntire caught it and handed it off to the singer, who proceeded to “Walk On” away from the scene.

“Thankfully, no one was seriously injured,” McEntire told TMZ. “We were safely evacuated from the building thanks to the quick response from the Atoka fire and police departments.”