Thinking out loud! Ed Sheeran can’t stop gushing over his baby girl, Lyra Antarctica, ever since he and his wife, Cherry Seaborn, welcomed their daughter in August 2020.

“Ello! A quick message from me as I have some personal news that I wanted to share with you… Last week, with the help of an amazing delivery team, Cherry gave birth to our beautiful and healthy daughter – Lyra Antarctica Seaborn Sheeran,” the singer-songwriter announced via Instagram in September. “We are completely in love with her,” he continued. “Both mum and baby are doing amazing and we are on cloud nine over here. We hope that you can respect our privacy at this time. Lots of love and I’ll see you when it’s time to come back.”

Of course, with her unique moniker, fans were itching to know the meaning behind the bundle of joy’s special name. According to the artist himself, he wanted to give his baby a title that was bound to make her stand out. Keep scrolling for more details about Ed Sheeran’s baby’s name.

Ed Sheeran wanted his baby to stand out 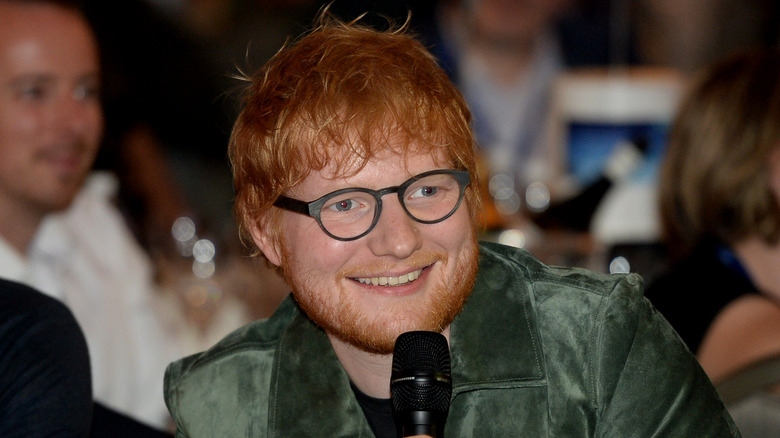 With a name like Lyra Antarctica, Ed Sheeran guaranteed that the world would be his daughter’s oyster with her already iconic stage name. And it sounds like that was the point.

“I realize some people think it’s quite a strange name,” Sheeran admitted about Lyra’s moniker on the July 2 episode of the “Lorraine” show. “But my wife’s called Cherry, and she is the only Cherry that I’ve ever met and I think that she’s the only Cherry that she’s ever met and I quite like that. In my class at school, there were probably more Eds.”

To put it simply, Sheeran “just wanted to give her a name that was unique, so that she would be the only one,” he told the UK morning show host. However, Sheeran noted that the name is “more common now” thanks to the “His Dark Materials” fantasy-novel trilogy, whose main heroine in the series goes by Lyra. And we know he is a fan of the novel after calling it “the greatest love story ever told” in 2017, per The Independent.

But while Sheeran was going for originality with his daughter’s first name, he made sure her middle name was meaningful to the couple. “So we went down there in 2019 and it was just incredible,” Sheeran said about a trip he and his wife took to the artic shortly before Seaborn became pregnant. Calling it “the most amazing place on earth,” it seems fitting for his little girl.