Simon Rimmer is at the centre of a social media storm over the toilets at his restaurant. The Sunday Brunch presenter and chef opened Greens on Stanley Square in Sale alongside Simon Connolly earlier this month.

But a social media user was less than impressed to find the restaurant only provided unisex toilets.

Twitter user, @Lulabell tweeted: “Just been to @simonrim’s lovely new restaurant where I was disappointed to discover gender-neutral toilets. Men and women awkwardly shuffling round each other wondering if they were in the wrong place. Yeuch.”

Simon, 59, took to the micro-blogging site on July 16 and addressed the situation adding it was not a decision he made lightly.

He also shared a photo of the toilets and stressed, that although there is a communal area, all the cubicles are separate. 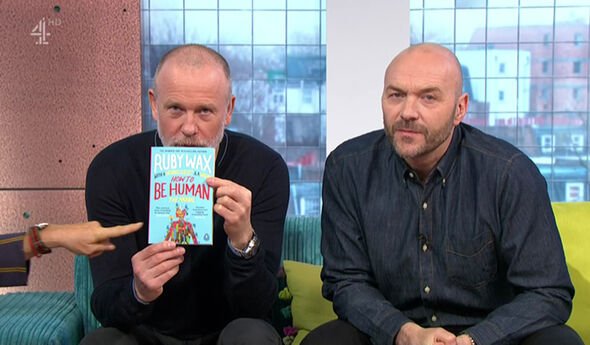 In view of his 275,000 followers, the Sunday Brunch chef explained he listened to customer feedback before going forward with the plans.

He tweeted: “Our decision to have unisex toilets was not taken lightly. We have trans and non-binary customers and staff. We also have a separate accessible toilet for any person who finds the unisex toilets unacceptable. We listen to feedback from customers constantly.”

Simon’s decision sparked a divide in the comments as many social media users reacted to his post.

Amongst his critics was Maya Forstater, a researcher renowned for a gender critical stance that stresses the distinction between biological sex and gender identity. 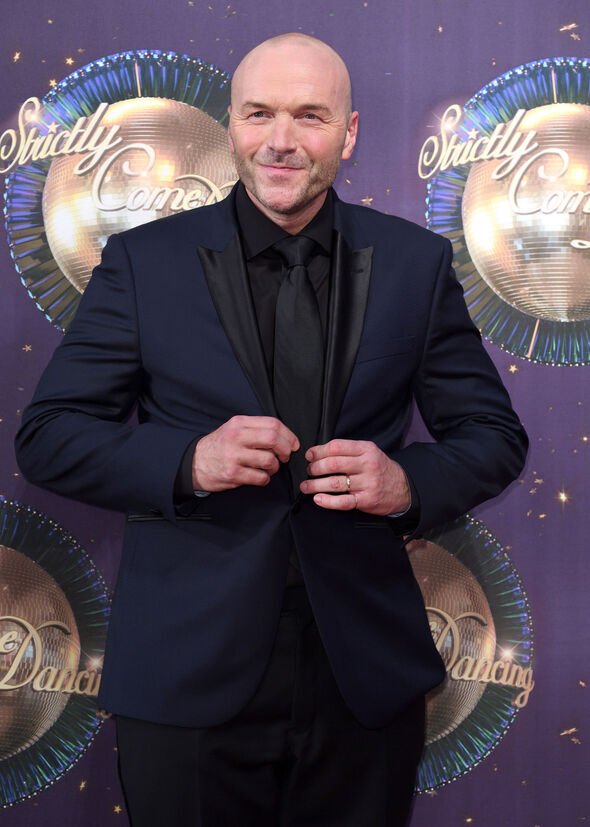 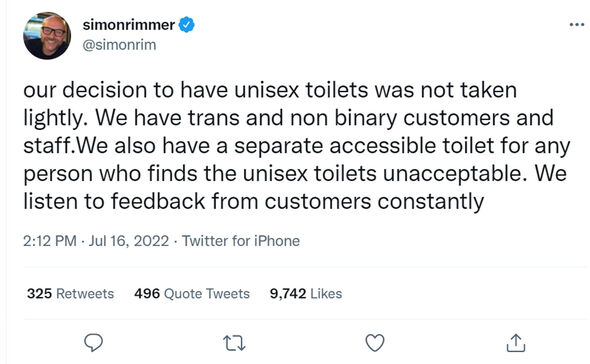 In a substantial thread, she also accused the restaurant of “trading off safety for stylishness”.

To which Simon replied: “Yes, I did.”

@keybehaviours tweeted: “Many people don’t use accessible toilets as they wouldn’t want those who need them to have to wait. Did you consider this in your arrangements?”

Simon responded: “Correct me if I’m wrong but we were told by building control that an accessible toilet is for disabled people and anybody requiring a more private environment due to religion or embarrassment or anxiety?”

@IanGee wrote: “So people with disabilities will likely have to wait to use the toilet specifically made for their needs because you care more about looking woke? Cool, cool. #DisabilityPrideMonth.”

But a number of others came out in support of the restaurant instead.

Former Great British Bake Off contestant Ruby Tandoh said:  “I’m not sure how anyone is managing to take issue with this.

“I hope more businesses follow suit (and stand their ground against the ghouls who seem to think that Simon Rimmer’s restaurant’s loos are the Somme and not, in fact, a place to p*** after a Campari and some garlic bread).”

@FunPhil commented: “The first unisex toilet I ever went in was in a club in Amsterdam in 1975 … can’t believe almost 50 years later some Brits are making a fuss about it.”

@AbsoluteTerror tweeted: “Everyone’s toilets at home are unisex, amazing how suddenly it’s an issue to have unisex toilets outside of that isn’t it.”

Sunday Brunch airs on Sunday on Channel 4 at 9.30am.