Joe Jonas and Sophie Turner were among a large group of friends who attended ‘SNL’ to support friend Taylor Swift during her ‘All Too Well’ performance!

Sophie Turner, 25, rocked a 70s inspired look as she headed to the Saturday Night Live afterparty with husband Joe Jonas, 32. The Game of Thrones actress wore a bright yellow vest with lingerie and layered gold chain necklaces underneath. She paired the top with matching trousers for the evening out on Saturday, Nov. 13, looking straight off the runway. She held onto a black leather jacket that matched her leather cylinder shaped purse and platform pumps. 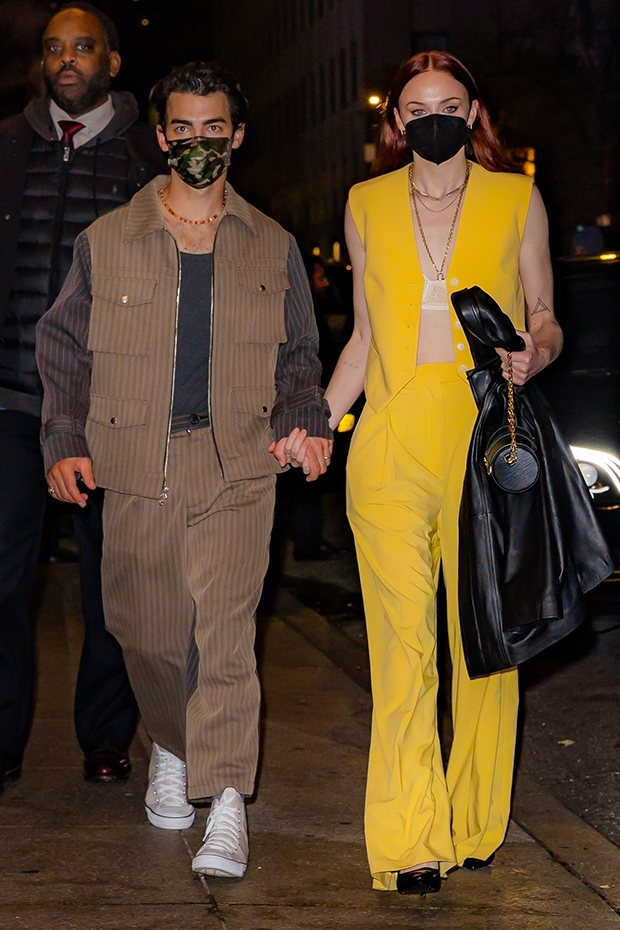 Sophie held hand with her husband Joe, who was also rocking a throwback vibe with his brown striped outfit consisting of a cropped trouser and zip-down, collared bomber. The jacket featured a darker brown sleeve to create a neutral contrast, matching his scoop neck t-shirt. The Disney alum finished his look with high top white sneakers and an orange chain necklace, along with a camo printed face mask.

The couple also attended the taping of SNL, where friend Taylor Swift, 31, performed her newly released 10-minute version of “All Too Well” about her 2009 relationship with Jake Gyllenhaal, 40. In the longer version of the song, Taylor reveals more about her ill-fated three-month romance, including that Jake blamed their 10 year age difference on the break-up — despite going on to date other younger women.

Notably, Joe and Taylor also dated as teens in 2008 — which is how she met BFF Selena Gomez, 29. Several songs on Fearless are believed to be about Joe, who she later revealed broke-up with her in a 27 second phone call. “It’s all right. I’m cool…When I find that person that is right for me, he’ll be wonderful. When I look at that person, I’m not even going to remember the boy who broke up with me over the phone in 27 seconds when I was 18,” she said to Ellen DeGeneres shortly after.

Years later, she called the bombshell moment one of the most “rebellious” things she’s done — but confirmed she and Joe are on good terms as adults. “[The most rebellious thing was] probably when I put Joe Jonas on blast on your show. That was too much. I was 18,” Taylor said to Ellen again in 2019. “We laugh about it now, but that was mouthy. Just some teenage stuff there,” the singer explained.

On Folkore, Taylor sings about sending an ex-boyfriend a baby gift — largely believed to be for Joe’s daughter Willa, 1. “For the boys who broke my heart / now I send their babies presents,” she crooned on “Invisible String.” Taylor has also been friendly with Sophie for some time, with the pair even appearing together as guests on The Graham Norton Show. “I like what we’re doing tonight!” Taylor said as she hugged Sophie on-set in May 2019.