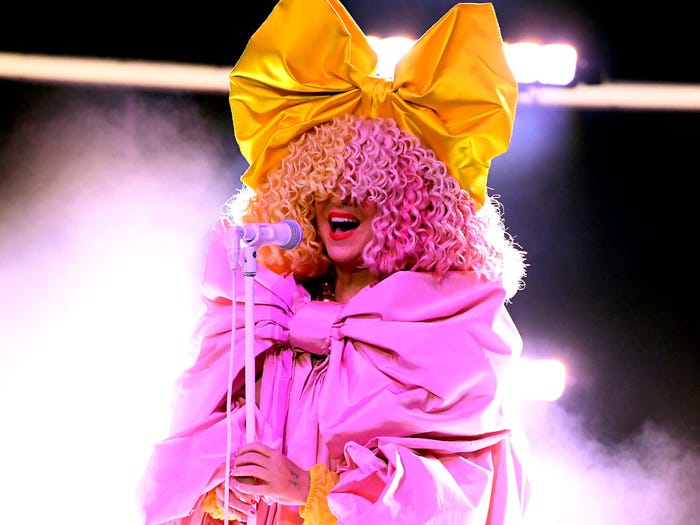 Sia unveiled the first look at her upcoming musical-movie production about a young girl on the autism spectrum, and was immediately met with dismay by people with disabilities who took issue with the portrayal of autism.

Since Ziegler is able-bodied and neurotypical, many people saw the trailer for "Music" and identified the film as continuing a harmful Hollywood pattern of characters with disabilities being played by non-disabled actors.

Representatives for Sia and the production company behind "Music" didn't immediately respond to Insider's requests for comment.

When asked why a disabled actor wasn't cast for the main role, Sia said it would have been 'cruel, not kind'

In the trailer for "Music," Ziegler's character appears unable to communicate verbally.

Her half-sister (played by Kate Hudson) is seen talking with a friend (played by Leslie Odom Jr.) about how Music can understand what's being said around her but sees the world in "a completely different way from us" and needs help communicating.

"Hi Sia, can I ask why you didn't cast a disabled actor for this part?" actor Bronagh Waugh tweeted at the singer. "It's pretty offensive the way you've chosen to portray this character. People with disabilities are not broken and don't need fixing."

"I agree," Sia replied. "I've never referred to music as disabled. Special abilities is what I've always said, and casting someone at her level of functioning was cruel, not kind, so I made the executive decision that we would do our best to lovingly represent the community."

In response to another person, Sia said she "tried working with a a beautiful young girl non verbal on the spectrum and she found it unpleasant and stressful," which is why Ziegler was ultimately cast.

"With disability, the representation is still woefully inadequate and we think that's based on a stigma that's prevalent in society and also in Hollywood," the foundation's president told the Washington Post in a 2016 interview.

"Did you do any research or consult the community at all?" another person asked Sia. "It's very condescending to say it would be cruel to consult a disabled actor."

One person added to a thread of criticism, identifying themselves as an autistic actor who would have gladly acted in the movie" on short notice.

"The fact of the matter is zero effort was made to include anyone who is actually autistic," they wrote.

"F—ing bulls—," Sia wrote in a second reply to the same person. "You have no f—ing idea because you weren't there and haven't seen the movie."

Another person said it was "a mighty shame" that someone with a huge platform like Sia was "using it to exclude disabled and neuro diverse actors from their own narratives."

"I've been a long time fan of your work, so this is really disappointing," they wrote.

"I cast thirteen neuroatypical people, three trans folk, and not as f—ing prostitutes or drug addicts but s as doctors, nurses and singers," Sia replied. "F—ing sad nobody's even seen the dang movie. My heart has always been in the right place."

Among her relay of defensive tweets, Sia also sent out a tweet to her 3.8 million followers: "Grrrrrrrrrr. F—ity f— why don't you watch my film before you judge it? FURY."

In reply to others, Sia wrote simply "such bulls—" and called one criticism "100% fake news."

Sia says she had 'two people on the spectrum' advising her on the movie 'at all times,' but people are also taking issue with the autism organization partnered on the film

An added layer of criticism comes from the association of a group called Autism Speaks with "Music."

Autism Speaks has been a divisive organization for many years. Many people with autism take serious issue with the group's harmful descriptions of the disorder — for example, the way the organization's advertising has compared autism to "pediatric AIDS, cancer, and diabetes."

"As the largest nonprofit related to autism, it spent years promoting ideas and information that furthered stigma and misunderstanding about the condition," Sara Luterman wrote in the Washington Post earlier this year.

"Autism speaks came on board long after the film was finished, four years in fact," Sia told one person on Twitter. "I had no idea it was such a polarizing group!"

Sia continued to stand by her decisions around the film, and encouraged her detractors to watch the movie before making judgments.

"I believe this movie is beautiful, will create more good than harm and if I'm wrong I'll pay for it for the rest of my life," Sia tweeted to one person.