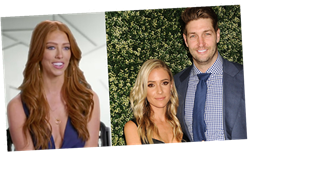 Shannon Ford, Kristin Cavallari’s ex-Very Cavallari castmate, is getting real. During Dear Media’s latest Not Skinny But Not Fatpodcast episode, Ford opened up about her relationship with Cavallari and her ex, Jay Cutler.

During season 2 of the E! show, Ford was fired by Cavallari as the social media director of Uncommon James. Last year, Ford was spotted having dinner with Cutler, seven months after he and Cavallari split. Ford explained that there was nothing going on with Cutler, and the two had lunch with their mutual friend, Mark “Chuy” Block, in Charleston, South Carolina. That’s when Cutler posted a video with her in it that had fans going crazy.

“People don’t realize this, I was with my mom and my grandma. That video didn’t show my mom and my grandma were there. That’s how not spicy it was,” she told host Amanda Hirsch, adding that she “doesn’t know the reasons” why Cutler posted the video, but it appeared he wasn’t the best at social media.

“[The video] was on his [Instagram] Story and he goes, ‘I’m confused. Where do I type the caption?’” Ford recalled. “That’s how removed he is from social media.”

“I didn’t post it. I didn’t look thirsty. When I got there, I put my phone very far away because I thought they might think like, ‘Oh, Shannon will love this. She’ll love nothing more than attention and I wanted to be, like, the cool girl that genuinely was enjoying a drink with her friend and Jay,'” she said.

“So I was like, I’m not going to make this weird at all…I want to prove to them that I’m, like, not weird,” Ford noted.

She added that she thought the NFL player posted it to “be funny.”

As for keeping in touch with the former Laguna Beach star, Ford said they’re not on the best of terms. She even claimed that Cavallari once tried to stop her from pursuing brands deals after she was let go of the show.

“[Kristin] sent me a message that was like, ‘You can’t do a brand deal for … ‘ and she listed, like, eight things I couldn’t do, and I was very bothered by that because I was, like, ‘Let a b**ch get her f**king bag,” Ford claimed. “Like, you are a millionaire dating another quadruple millionaire. I am a 23-year-old girl trying to pay rent.”

However, she did share that she was “sad” to hear of Cavallari and Cutler splitting. The reality star and the athlete separated in April after seven years of marriage. They share three children together.

“I was very close to Jay and Kristin outside of working. The brand originally started in her home. We were in her living room every day working,” she said of the former couple. Calling them “good parents,” she added, “I don’t know anything about, like, them together, but I only just viewed them as parents.”

“There are three small children who have parents that are divorcing and that’s sad. I just genuinely mean that. That was, like, actually my thoughts on it. I’m sad,” Ford said. “Not sad if they don’t want to be together, then I’m happy that they’re figuring that out separately. But I’m sad that it’s very public and that they have children.”