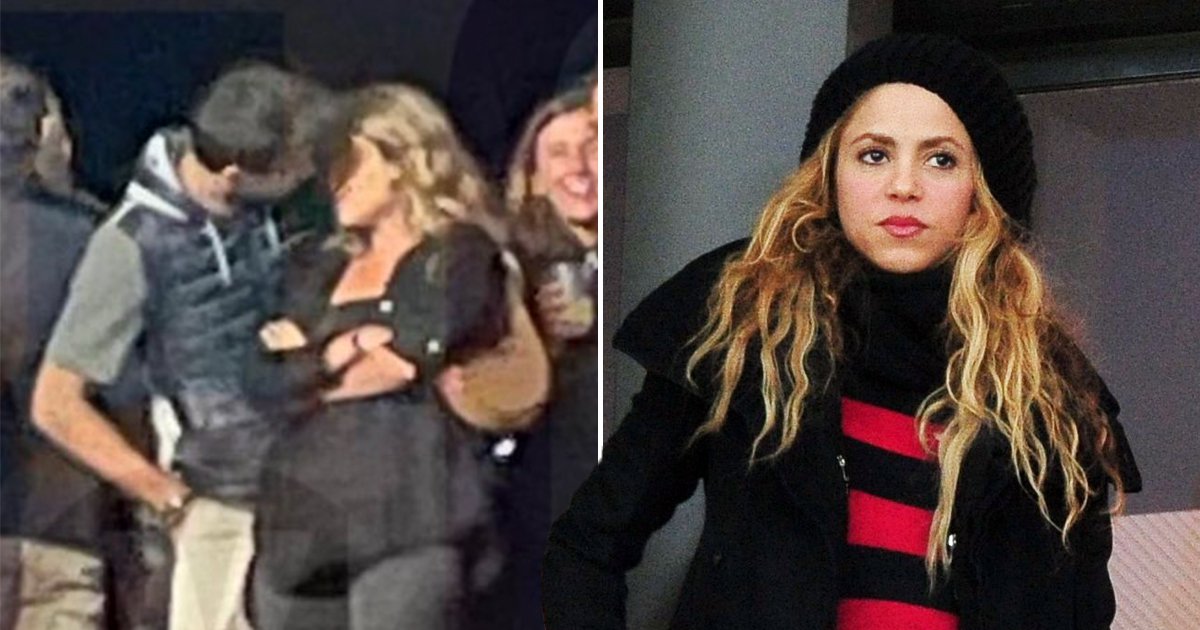 Gerard, 35, was seen locking lips with the 23-year-old in a new video taken by Spanish media outlet Socialite at the Summerfest Cerdanya festival in Catalonia.

The report adds that a source close to Shakira’s family said she is ‘very angry at seeing the father of her children with his girlfriend in public’, as they allegedly had a pact between them.

The pair are said to have made a deal to not appear in public with their new love interests in the first year of the breakup.

However, the footballer couldn’t keep his hands off his blonde partner and didn’t appear to be bothered about all eyes being on them.

Socialite host Laura Roige narrated over the new clip: ‘I am excited, it is evident that there is a relationship.

‘I have seen a lot of love, it will hurt Shakira a lot, because this is a Gerard Pique that we have never seen. I have never seen him like this with the singer.’

The public display of affection comes three months after Gerard split from the 45-year-old Hips Don’t Lie singer with whom he shares two children.

Clara, a PR student, works for Gerard’s sports and media investment group Kosmos. The pair are said to have met while working on an event together.

‘Gerard and Clara have been seeing each other for months,’ a source told The Sun. ‘She is a student who also works for him in his office, organising events.

‘They have been keeping quiet about their relationship but those around them all know what is happening.’

They continued: ‘People have been helping him keep the romance hush-hush and have wiped Clara’s social media accounts so people can’t find photos of her.

‘That alone makes his mates think he is actually quite serious about being with her.’

Shakira and Gerard only announced in June that their 11-year relationship had ended.

The announcement followed rumours in the Spanish press that the couple were on the verge of breaking up as Gerard allegedly cheated on the star.

Shakira’s statement read: ‘We regret to confirm that we are parting ways. For the well-being of our children, who are our highest priority, we ask that you respect their privacy. Thank you for your understanding.’

According to Spanish newspaper El Periodico, while the pair’s relationship is allegedly strained, they have vowed to remain friends for the sake of their sons, Milan, nine, and Sasha, seven.

The outlet also reported that Gerard was kicked out of the family home by the pop star.

According to their sources, he has since been living a ‘party lifestyle’ in a rented bachelor pad and enjoying nights out with his teammates.

The couple had been together since meeting in 2010 as the singer filmed the music video for her World Cup song Waka Waka.

In 2012, Shakira announced on Instagram that she was pregnant with their first child.

Two years after the birth of Milan, they announced that they were expecting Sasha.

The couple admitted publicly that they have no plans to marry, but fully intended to continue their romance and raise their children together.

The singer is accused of failing to pay the Spanish government nearly $15 million in taxes between 2012 and 2014. The prosecutors said they would also seek a fine of $24.5 million.

Charges allege Shakira listed the Bahamas as her official residence for tax purposes during those years but was in fact living in Spain with Gerard.

Metro.co.uk has reached out to representatives for Shakira and Gerard for comment.