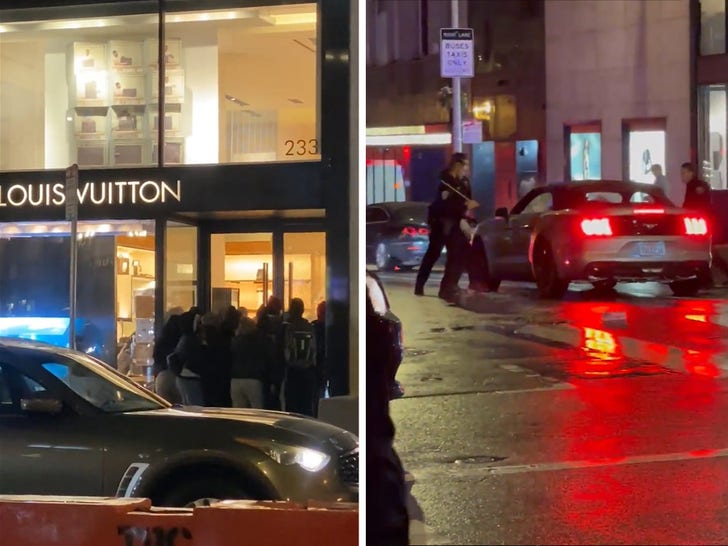 A smash-and-grab heist of a Louis Vuitton store in San Francisco ended up looking like an action movie when the police showed up — and it was all captured on crazy video.

Check out this wild scene of people ransacking the luxury retailer in Union Square Friday, with a ton of people flocking in and raiding the place for most everything it had. Bystanders caught tons of bodies storming into the front doors once the windows were busted.

It doesn’t appear to be tied to any type of demonstration or anything like that — so far, this seems to have been a random act of looting … that folks happily took advantage of once it was underway.

As you can see … folks helped themselves to a number of items inside, walking out with armfuls of products (big and small) and casually — albeit somewhat briskly — walked away from all the action — trying to get the hell outta there before the police arrived.

Word is … the people that stormed the store actually pushed over a security guard who was standing watch inside — this LV was closed at the time of the incident — and they had their run of the place. That is, until the cavalry got called in … and, boy, did they come in blazing.

Watch this video of an SFPD squad car roaring up to the chaos and peeling in front of a parked convertible Mustang that, for whatever reason, was just chillin’ there … and which the cops apparently thought might’ve had something to do with the break-in.

Three officers surround the vehicle and start pulverizing it with their batons … breaking in the windows and smashing up anything they can as they demand the driver get out of the vehicle. Eventually, they detain him and get him in cuffs — but it’s unclear what involvement, if any, this person may have had with what was happening just feet away.

In any case, it would seem the cops had reason to believe this car was carrying would-be culprits inside — because the veracity with which they pounced is pretty shocking.

Anyway, the aftermath of it all made for quite a mess … glass scattered everywhere, as witnesses milled about and took video of everything. As for the police, they told local media they’ve already apprehended several suspects they believe were involved in the theft.

We know the holidays are stressful … but sheeeesh, people … take it easy!!!