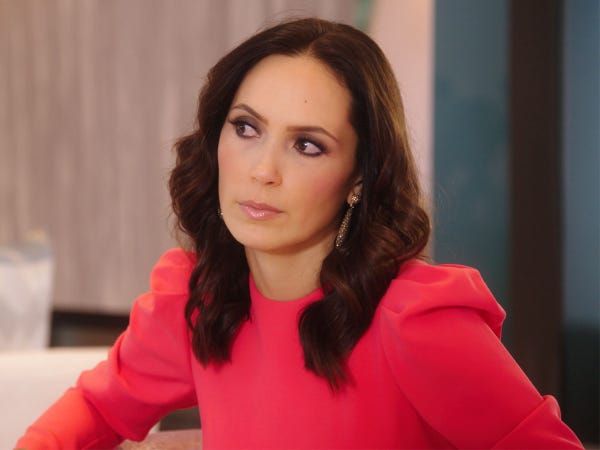 Davina Potratz, one of the most polarizing characters on Netflix's "Selling Sunset," is leaving the Oppenheim Group.

"My background is in new development sales and marketing, so this is just a wonderful opportunity for me," she told People on Wednesday, explaining that Douglas Elliman made her an offer she couldn't turn down.

"It's just very in tune with my skills," she added, referring to her new role.

Potratz said that she didn't plan on leaving the Oppenheim Group before receiving the offer.

"It's not that I wanted to leave, but I had a great opportunity," she said. "It was a purely business decision."

Jason Oppenheim, the president and founder of the Oppenheim Group, remains on good terms with Potratz following her decision.

"Davina has always been a tremendous asset and a valued agent at the Oppenheim Group, and she is also a friend whose career decisions I very much respect and support. I will always want the best for Davina, and I hope that we continue to work together in the future," he said in a statement to People.

Potratz added that her boss was "sad" to learn that she's leaving the group but "understands" why she accepted the role. She continued to explain that she hadn't broken the news to her coworkers and castmates but was confident that they'd support her.

"We all know each other so well. So I think they'll be excited and supportive," she told People.

Her decision to leave the Oppenheim Group comes after Brett Oppenheim, Jason's brother, left the firm to start his own brokerage.

While the move led many people to wonder if Brett's decision would affect the show, "Selling Sunset" star Mary Fitzgerald confirmed that Brett will continue to appear on the series should it be renewed for a fourth season.

"Nothing has changed as far as our personal lives. It's just a matter of where he hangs his license," she told Insider.

If the show is picked up for a fourth season, Potratz said she would also like to remain part of the cast.

"I certainly hope that I'm still part of the cast," she told People. "Brett is not at the Oppenheim Group anymore either, so I don't think that that's going to be an issue at all."

Potratz, who battled with Jason about taking on a $75 million listing on the show, previously toyed around with the idea of leaving the group on "Selling Sunset" after claiming that there was favoritism in the office.

In August, she said she would "consider" leaving the Oppenheim Group to start her own firm but added that it didn't seem like the right time.

"I would consider it," she told OK! Magazine. "But I don't know if I'm gonna do that for sure because it's also a lot of work to set up an office. It's a lot of responsibility and liability taking on all this insurance and build up a new website and, honestly, I don't have time right now."