Ryan Reynolds joked about his safety plan in the event of an assassin break-in: using his wife Blake Lively as a human shield.

Ryan Reynolds would use wife Blake Lively as a human shield in the event of an assassin break-in, as one does. The actor, 44, appeared on a Comedy Central UK segment published on Friday, Aug. 13 to promote his new film Free Guy alongside co-star Jodie Comer. The duo answered questions in line with the theme of the film, out now, and when pressed on how he would defend himself against an assassin, Ryan pointed to Blake, 33.

“Ryan, you’re in your room playing a video game. An assassin approaches. What do you do?” one question read. He replied, “Oh wow, I don’t know. I think I’m gonna put down the video game, I’m gonna grab Blake and use her as my human shield.”

In a previous question, Ryan was asked the same question but in a bathroom setting on the toilet, to which he quipped: “I’d probably die because just, you know, muscle memory would make sure I took care of all the appropriate toilet things first before addressing the inherent danger.”

Other notable moments from the segment include Jodie admitting that her dream man is Shrek. When asked which cast member was most likely to fall in love with a fictional character, the Killing Eve actress responded, “Me, for sure,” adding: “My dream man is Shrek when he turns humor. Don’t act like you don’t know what I mean!” 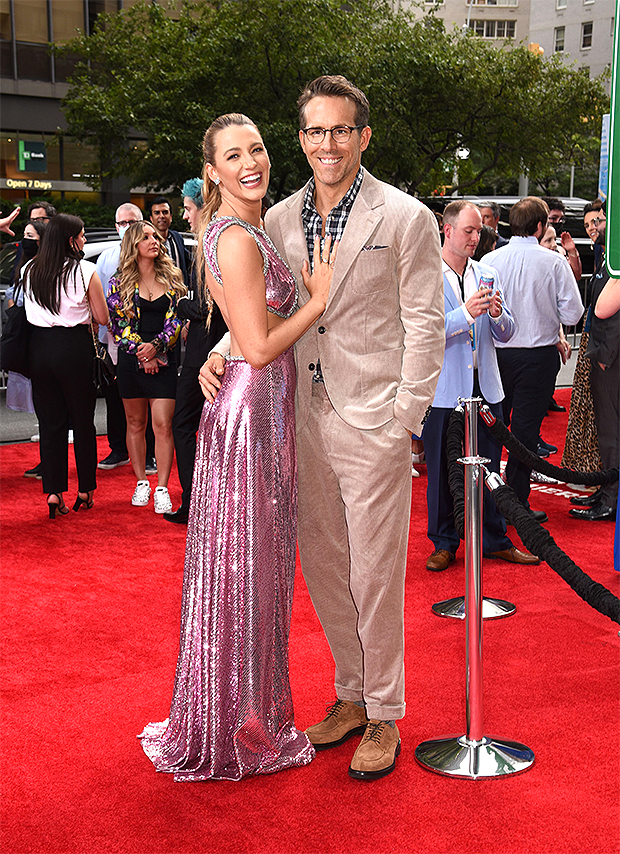 Ryan has a long history of trolling his wife. During an appearance on The Late Show With David Letterman back in 2015, the actor similarly joked about using Blake as a human shield to protect his eldest daughter James, 6, following her arrival just a few months prior. (The two now also share Inez, 4, and Betty, 1, together.)

“I used to say to [Blake], ‘I would take a bullet for you. I could never love anything as much as I love you,’” he told David. “And the second I looked [into] that baby’s eyes, I knew in that exact moment that if we were ever under attack, I would use my wife as a human shield to protect that baby.”

All jokes aside, Ryan told the late night host that he fell “more in love” with Blake, whom he wed in 2012, after the arrival of their first child. “I’m not one for vomiting declarations of sentiment out across the airwaves, but when we had that baby, I fell more in love with my wife than I’d ever been in my entire life,” he gushed. “I couldn’t even believe it.”