Zara Tindall and her husband, Mike Tindall, have a new bundle of joy.

The queen’s granddaughter (daughter of Princess Anne) welcomed a baby boy last Sunday. According to People, Lucas Philip Tindall, who is the queen’s 10th great-grandchild, was born weighing eight pounds and four ounces. Baby Lucas marks the third child for the Tindalls, who also share daughters Mia, 7, and Lena, 2. Their son’s middle name is believed to be an ode to Zara’s grandfather Prince Philip, and Mike’s father, who shares the same name.

Buckingham Palace released a statement congratulating the couple and expressing their excitement over the newest addition to the royal family, stating, “The Queen and The Duke of Edinburgh are delighted with the news and look forward to meeting their 10th Great Grandchild when circumstances allow.” 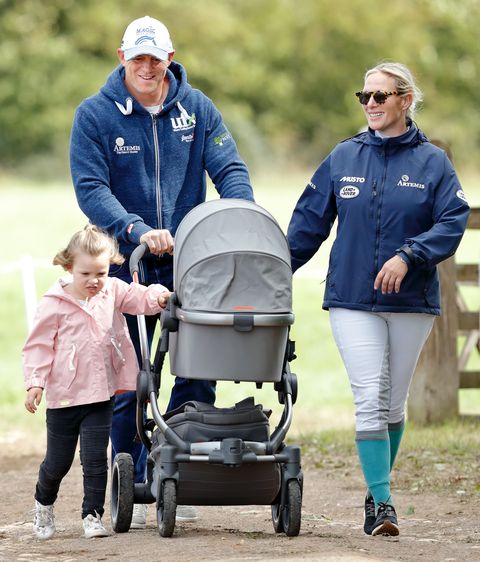 Mike Tindall offered a glimpse into the couple’s unexpected birth experience during an episode of his The Good, the Bad & the Rugby podcast, revealing that his wife actually gave birth on the bathroom floor at their home after not having enough time to make it to the hospital.

“A little baby boy arrived at my house!” announced Mike during the episode. “So, it was run into the gym, get a mat, get into the bathroom, get a mat on the floor, towels down, ‘brace-brace-brace.'”

Mike continued, sharing that they were lucky enough to have two midwives assist during the home birth. “Fortunately, the midwife, who was going to meet us at the hospital wasn’t that far away, so she drove up, got there just as we’d assumed the pos-ish [position],” continued the father of three. “And then the second midwife arrived just after the head had arrived.”

When asked how his wife was faring after the delivery, Mike revealed that she was “a warrior as always. She was back up. We went for a walk [on Monday] morning with him. All good.”