Playboy Model Claims Hugh Hefner NEVER Had Sex With Any Playmates – It Was All For Show!

Is this the biggest Playboy reveal since Brazilian waxing? Or a huge misunderstanding??

Former Playboy Playmate Jenna Bentley is spilling some cold tea, and we don’t know whether to let it blow our minds or just raise a suspicious eyebrow.

The 31-year-old was a guest on Gina Stewart‘s Get Naked With Gina podcast on Thursday to talk about life after the bunny ears and her new career as an OnlyFans star. She’s found a huge amount of success on the adult platform, where she’s one of the top creators, reportedly putting away tens of thousands of dollars a week! She told the host:

“I can finally say after a decade of modeling I make far more money with Onlyfans than I ever did with runway modeling, magazine work, print work, social media campaigns.”

But Jenna’s big bombshell had nothing to with her new business — it was all about her former boss.

Speaking about her time at Playboy, Jenna mentioned she couldn’t get too detailed because she “had to sign a non-disclosure agreement for many reasons.” She did tease:

“You can assume I met many famous musicians, politicians, celebrities. All I can say is there were lots of fun sex parties, but the rest… oh if only the walls could talk!”

But while the image of the Playboy Mansion may be intact, what Jenna had to say about the man behind it all may forever change the way millions see Hugh Hefner.

About the infamous entrepreneur behind the empire of skin, Jenna claimed the idea he was having sex with Playmates in his later years was all just PR! She said:

“He didn’t have sex with any of us. It was only to take pictures and make him look good for the media.”

“Hollywood has a way of portraying things a certain way, but really, do you think an 87-year-old man is sleeping with nine hot blonde 20-year-olds? Like honestly, let’s be realistic. It makes me laugh to this day, but people always believe what they want. It was an incredible opportunity and I’m so happy I got to experience that lifestyle.”

Could it be Jenna herself never had sex with Hef and is just making assumptions about everyone else? Or is she the only one willing to shatter the illusion??

It’s certainly easy for her to say now as the man isn’t around to combat the claims, having passed away three years ago at the age of 91. But we do have some other accounts that say very differently, namely those of “the girlfriends.”

Yes, Hefner was well known in his later years to have three girlfriends, the stars of the reality show The Girls Next Door: Bridget Marquardt, Kendra Wilkinson, and Holly Madison. 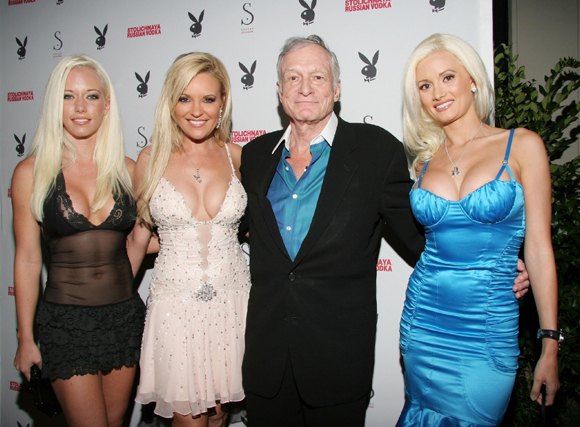 Obviously it wouldn’t be the first time reality TV turned out to be lying to us, LOLz, but the ladies themselves would have to have been in on it as well.

In Holly’s memoir Down the Rabbit Hole: Curious Adventures and Cautionary Tales of a Former Playboy Bunny, she in fact described in detail the sexual routine of Hef and the Playmates he chose for the evening. She said the girls bathed their feet in a black bathtub before putting on pink flannel pajamas and getting into bed with, essentially, their boss:

She wrote about how the girls competed for his attention “because it made him feel special.”

The whole thing was not complimentary — she called it a “miserable” experience — so why would she lie about it? 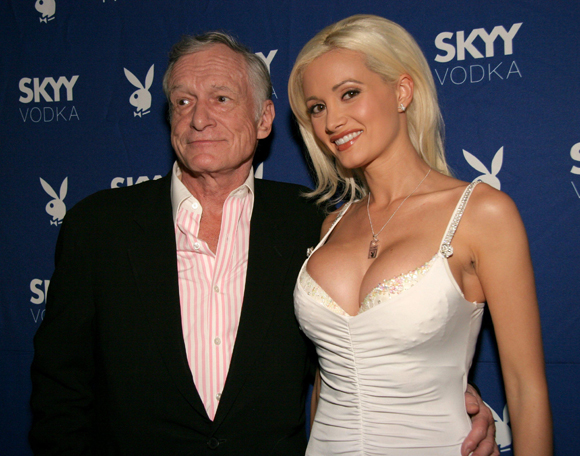 Likewise Kendra spoke out about how unpleasant sex with Hefner was in 2014, telling the Daily Mirror she “had to be very drunk or smoke lots of weed to survive those nights.” She went into painful detail about it, saying:

“At about the minute mark, I pulled away and it was done. It was like a job. Clock in, clock out. It’s not like I enjoyed having sex with him.”

It was said at the time the reality star was just trying to get back at her former boyfriend/benefactor for cutting her off. Would she really have made up such a description of bad sex to hurt his reputation instead of just telling the truth that no one was having sex with him??

What do YOU think about all this, Perezcious readers? Is Jenna the only one telling the truth here? Or is she just speaking from her own (lack of) experience and completely wrong about what happened with everyone else??