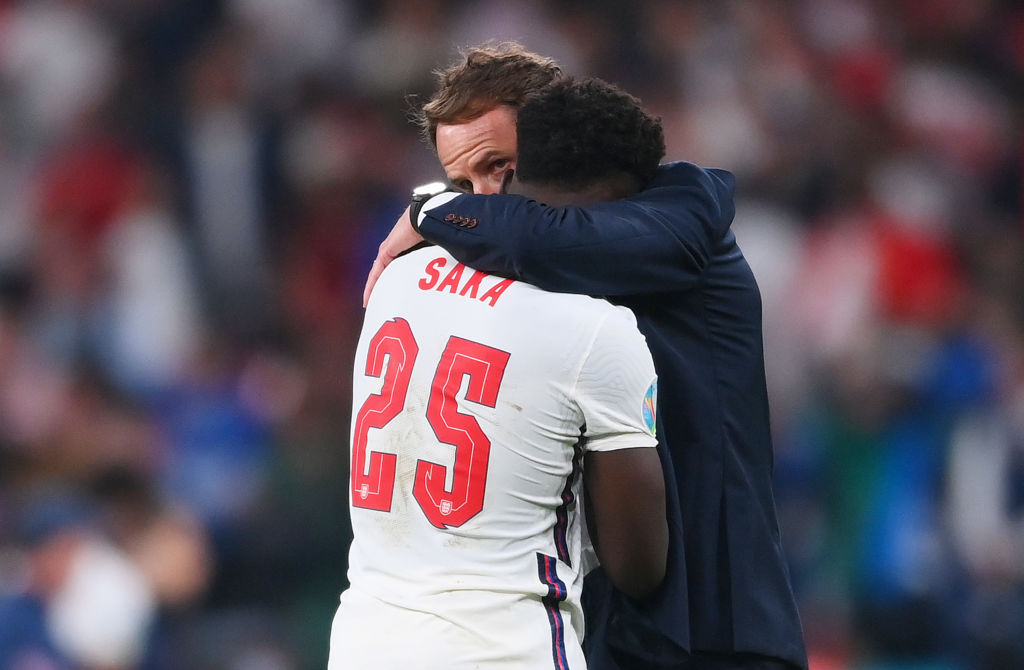 Marcus Rashford, Jadon Sancho and Bukayo Saka were targeted with racist abuse on social media after they missed their penalties during last night’s shootout, with Italy eventually taking home the trophy.

Seeing the vile reaction online, many followers took it upon themselves to flood each player’s public page with love, in an attempt to drown out the hate.

A string of celebrities have also called out the vicious response, and called for more protection for the footballers at the centre of the abuse.

Taking to Twitter, Piers penned: ‘When England’s players took the knee last night, I was pleased to hear loud applause drown out a few boos.

‘Then our Black stars get horrifically racially abused after the game. This is why they take the knee.

‘This is why I support them in taking the knee.’

Giovanna Fletcher simply implored fans not to be a ‘d**k’ on Instagram, which is short but sage advice that many could use right now.

Beside the post on her page, she told followers: ‘Look after your neighbours, your colleagues, the people you sit next to on the tube or bus.

‘If you see abhorrent behaviour, report it. If you see vile tweets of racial abuse, report it. Report it so people can be held accountable.

‘A brief look at Twitter has shown me a world I do not want my kids growing up in. However EVERY SINGLE player on that pitch last night has led with compassion, love, determination, dedication and focus – they’re the heroes and role models I want my children to see.’

‘We need to try – there must be a way that we can find out who these people are and actually call them out…fine them if needs be.

Boxer Nicola Adams shared a harrowing video from the corridors at Wembley Stadium, showing people rioting and fighting during the game.

‘I can’t believe the videos I have seen! It’s sickening! Racist abuse to the players! And attacks,’ she fumed.

‘This is exactly why football players are taking a knee! And England dose have a very big problem with racism! And this time it cannot be explained away!’

Tweeting a similar video, Ranvir Singh vowed: ‘This is NOT what England stands for  – disgusting – please report anyone you recognise to the police.’

While Vicar of Dibley’s Dawn French urged fans to ‘cherish’ Rashford, Saka and Sancho after their penalty misses.

Prince William, who was in the stands at Wembley Stadium last night, added: ‘I am sickened by the racist abuse aimed at England players after last night’s match.

‘It is totally unacceptable that players have to endure this abhorrent behaviour. It must stop now and all those involved should be held accountable. W.’

The FA has spoken out against the response from some fans towards the team, insisting that the racist abuse will not be tolerated.

‘The FA strongly condemns all forms of discrimination and is appalled by the online racism that has been aimed at some out our England players on social media,’ it read.

‘We could not be clearer that anyone behind such disgusting behaviour is not welcome in following the team.

‘We will do all we can to support the players affected while urging the toughest punishments for anyone responsible.’