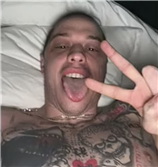 Pete Davidson has a message for Kanye West.

And he actually just sent it directly to Kanye West.

On Saturday, in the wake of this rapper hurling various taunts and insults the way of this comedian, Davidson seemingly reached out to West with a some advice and also with a request.

And also with a pretty huge taunt of his own.

“Yo it’s Skete, Can you please take a second and calm down. It’s 8am and it don’t gotta be like this,’ Davidson opens the back-and-forth.

He then takes West to task for all the negative things Kanye has said of late about Kardashian as a mom.

West trashed Kim a couple months ago, for example, after seeing that his young daughter had starred in a TikTok video.

“Kim is literally the best mother I’ve ever met. What she does for those kids is amazing and you are so f***ing lucky that she’s your kids mom,” Pete tells his foe, adding:

“I’ve decided I’m not gonna let you treat us this way anymore and I’m done being quiet. Grow the f*** up.”

Kanye quickly firres back with, “Oh you using profanity, Where are you right now?”

“In bed with your wife,” Davidson then writes, basically winning any argument right then and there, especially because he included a selfie along with this jeer.

Kanye thinks he has a strong retort, however, telling Pete he’s “Happy to see you’re out the hospital and rehab.”

But Davidson uses this snide remark to try to relate to West.

“Same here. It’s wonders what those places do when you go get help. You should try it. I’m in La for the day if you wanna stop being a little internet b**** boy and talk.

“You don’t scare me bro. Your actions are so p**** and embarrassing. It’s so sad to watch you ruin your legacy on the daily.”

West has been slamming Davidson all over the place (on social media and in songs, even fantasizing about burying Davidson alive), but here is the Saturday Night Live cast member, offering to meet up in person and talk things out.

At this point, Kanye invited Davidson to his famous Sunday services.

But Davidson says they should meet privately instead because this isn’t about publicity of any kind.

“What you are doing to your family is dangerous and going to scar them for life. Please handle these matters privately bro I beg you,” he tells West.

Kanye doesn’t accept the invite. He barely even acknowledges it.

“Let me help you man. I struggle with mental stuff too. It’s not an easy journey,” Davidson continues.

“You don’t have to feel this way anymore. There’s no shame in having a little help. You’ll be so happy and at peace”

Kanye has been open in the past about his bipolar disorder diagnosis.

It certainly appears these days as if he’s legitimately struggling with Kim and Pete’s romance, which began in October and which was sort of made official late last week after Kardashian shared two of photos of her boyfriend on Instagram.

“You have no idea how nice I’ve been to you despite your actions towards me,” Davison said to West toward the end of their exchange.

“I’ve stopped SNL from talking about or making fun of you which they’ve wanted to do for months.

“I’ve stopped stand up comedians from doings bits about you cause I don’t want the father of my girls kids to look bad out there.”

Davidson wraps things up with a slight threat:

“I have your back even though you treat me like s*** because I want everything to be smooth.

“But if you continue to press me like you have for the past 6 months, I’m gonna stop being nice.”

Pete’s lengthy message here came more than a week after a judge granted Kardashian’s request to be declared legally single amid ongoing divorce proceedings with Kanye, which started more than a year ago.

“While I wish our marriage would have succeeded, I have come to the realization that there is no way to repair our marriage,” Kim wrote in a February legal document.

“Kanye does not agree but at least it appears that he has come to the realization that I want to end our marriage, even if he does not.

West, meanwhile, previously apologized for his behavior when it came to Davidson.

He didn’t change said behavior very much after this mea culpa, however.

We’re very curious, and also very scared, to see what he does after Davidson’s above takedown.