Peta Murgatroyd: I Wrote a Goodbye Text to Maksim Before He Escaped the War in Ukraine 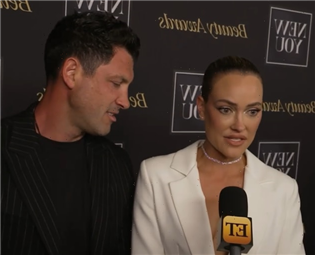 Even after being lucky enough to escape from Ukraine shortly after Russia invaded, Maksim Schmerkovskiy vowed to help.

Together with wife Peta Murgatroyd, he is working hard to help those whose lives have been upended by war.

While speaking about their efforts, the pair also opened up about how things felt right after Russian forces began their brutal campaign.

Peta teared up as she recalled penning a “goodbye text” in case Maksim was unable to make it out alive.

As new evidence of Russian war crimes — and genocide — against Ukrainian civilians has come to light, we are all heartbroken.

But these two have tangible connections to Ukraine. And Maksim, of course, was in the country when this began.

“To get the phone call and to see him frantically packing his bags trying to get out of the hotel,” Peta recalled.

She described how it “was just like, I had a heart attack nearly.”

Peta shared: “I had to sit myself down and calm down for him.”

“And then the next eight days [that Maks was there] were life changing,” Peta characterized. “Absolutely life changing.”

“I mean, I literally wrote him a text, almost a goodbye text like if something happens,” she revealed.

At this point, Peta was overwhelmed with emotions, having to fight back tears.

As we previously reported, Maksim spoke about being haunted by survivor’s guilt and vowed to help in some way.

He has returned, not to Ukraine but to Poland, launching his own charitable organization called Baranova 27.

Maksim admitted that he is still struggling to find a sense of “normality.”

“The fact that we’re here, the culminating moment is like, how do you get back to the normality of it all?” he asked.

“For me, it doesn’t exist without the association of the war that is ongoing,” Maksim emphasized.

“It hasn’t subsided,” he said of the war and the emotions tied to it.

Maks added: “It’s just the relocation of some things.”

“I was lucky that Peta was with me on this,” Maksim said of his latest trip to Poland.

“I made that commitment. We are working with Barnova 27, my organization,” he noted.

“We’re pushing out, we’re working on other ways of getting other things into the country and what’s needed,” Maksim said.

“We’re working on developing livable towns, makeshift towns that can maybe serve as something else,” Maksim noted.

“Try to attract technology, 3D printing and so on,” he shared.

Even 3D printing can take time, and there are millions of refugees fleeing the war who need housing, food, medicine, and more.

“This is what I’m dedicating myself [to], but I think it’s very important to also make sure people don’t forget about it,” Maksim highlighted.

“I realized when I got home that this is so far away and it’s hard to retell the story over and over,” he acknowledged.

“So, I’m just using this opportunity to also say like, ‘it’s going on right now,'” Maksim said of the war. “People are just now starting to need even more help and we should stay with it.”