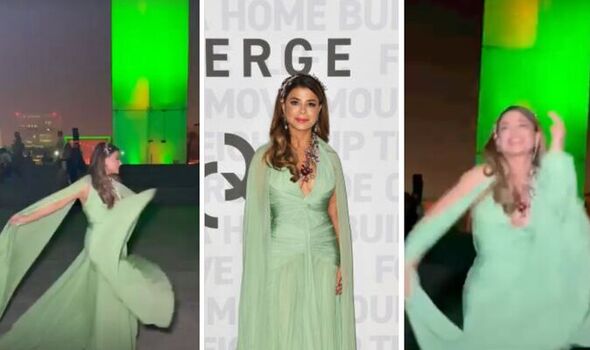 The American Idol judge addressed her 478,000 followers in her story post.

Paula Abdul, 60, stunned at the EMERGE fashion show as she took to Instagram to show fans that her musical talents continue to go beyond singing. The star and pop legend addressed her 478,000 followers as she enjoyed partying at the event.

She was dressed in a jade coloured low-cut sheer gown, completing her look with a crystal-adorned tiara and matching necklace.

In the short clip, Paula could be seen dancing and moving along to live music in the background.

The fashion runway show, which took place in Qatar, features top emerging designers as they show off their work.

Paula attended the show in the Middle-Eastern country, where she also attended the Fashion Trust Arabia Prize awards.

Paula Abdul was dressed in a low-cut jade sheer gown

The performer and singer attended the show designed to give young, up and coming designers a chance.

She attended the show and took to Instagram to thank the country for hosting her.

She thanked the “talent” present at the Qatari-based event

Paul Abdul wrote: “It was an honor to be surrounded by so many talented people”.

Paula Abdul herself presented some of the awards to emerging talent

She said on the picture sharing website that she and Egyptian actress Youssra presented the “Franca Sozzani Debut Talent Award to one of the most nominated, outstanding emerging fashion designers, @kazna.asker”.

She is most renowned for hits such as Straight Up.