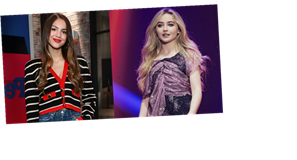 Olivia Rodrigo and Sabrina Carpenter’s alleged feud—you know, the one where Olivia released her smash-hit single, “Drivers License” and people thought it was about her feels for Joshua Bassett and him possibly dating Sabrina thanks to a very suspicious lyric—thankfully seems to be over now. In fact, Olivia’s now saying there’s no way that song could even be about Sabrina since they never forged much of a friendship.

In an interview with Radio.com earlier this week, Olivia invoked the spirit of shade queen Mariah Carey and said, “I actually don’t know her [Sabrina] at all…I think we’ve met once or twice in passing, but I’ve never had a conversation with her, so I don’t think I could write a song that was meaningful or emotional about somebody that I don’t know. But I think artists should be able to write about whatever they wanna write about.”

As you may recall, people believe that Sabrina wrote her song, “Skin,” in response to “Drivers License.” Spoiler alert: It is not a diss track! “‘Skin’ — I can’t stress this enough — is not about one person,” she said during her recent appearance on the Zach Sang Show. “I’ve had so many different experiences in the last year in my personal life and in my career where there was a lot happening and I couldn’t do anything about it and I couldn’t say anything ’cause it seemed like either way people were mad at me,” Sabrina said.

Sabrina also addressed the drama in an Instagram post while thanking everyone who supported the single, and wrote, “I wasn’t bothered by a few lines in a (magnificent) song and wrote a diss track about it.”

Now let’s move past this, shall we?

You love all the nitty-gritty deets on celeb gossip. So do we. Let’s overanalyze them together. ✔️