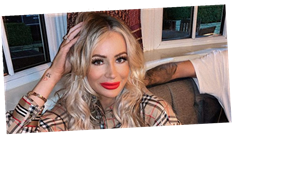 Olivia Attwood has urged her followers not to post mean comments about influencers online and urged instead for her fans to unfollow celebrities who are doing things to annoy them.

Laura hit out at criticism from fans asking why she had travelled to Dubai last week and soon after, claiming that her job as an influencer was “hard,” and that she travelled to the UAE for work.

Olivia was seen weighing in on the influencer debate the day before. The star, who is engaged to footballer Bradley Dack, said influencers sounded “stupid” when they claim to be flat out working while on holiday.

Now, Olivia has urged her followers not to engage in trolling or nasty comments with influencers who are abroad at the moment.

Taking a break from filming a make up tutorial on her Instagram stories, Olivia said: “What I will quickly say is that after yesterday’s rantings, my phone – I mean it literally nearly blew up in my hand. So I think even though I was rambling, what I said is probably what a lot of people are thinking or feeling, that’s what everyone said to me anyway. But I’ve said it now.

“But one thing I will say today, because I don’t want to encourage any hateful behaviour, don’t write mean messages. Yes they might be doing stuff that annoys you, yes they might be looking stupid.

“But ultimately, that’s going to be their own downfall so you don’t need to write them stupid messages, just unfollow. You know, everyone’s fighting something we don’t know about.”

Writing alongside her video, Olivia added: “Don’t be mean to people on the internet – no one gains anything. Message a friend, talk to your dog. Just deep breath and unfollow or mute. That’s what I’m going to do anyway!”

Previously, Olivia admitted to going on a “rant” when discussing her thoughts on influencers travelling abroad during the pandemic.

She said: “There is a difference between being able to earn money from wherever you are than being on holiday for work.

“Whenever I go on holiday I will post content which I can monetise but I’m still on holiday.

“I don’t go: ‘Me and Brad had them most amazing week in Portugal but don’t worry I was flat out working’. You just sound so stupid.“

Olivia also criticised reality stars and influencers who have suggested that everyone is in the same boat.

Urging influencers to be honest, the 29 year old added: “I just feel it’s giving a whole load of people a bad reputation when actually some people have just gone away and put their hands up and said they’ve gone on holiday.

“But some things I’ve seen in the last 24 hours, people legit on their Stories going, ‘You don’t know how hard it is to be an influencer.’

“People are losing their family members daily, people can’t pay their rent, people’s lifelong businesses they’ve worked their f******g b*****ks off for are crumbling around them and you’re on your Story on the beach telling us we don’t know how hard it is.“

Laura Anderson, 31, opened up about criticism earlier this week and said she didn’t think fans understood how hard it was being an influencer.

She said: “This whole thing about everyone hating influencers, I'm just like f**k, this is what I do for a job at the minute.“

Laura went on to add: "I thought it would be a good idea to give an insight so people don't hate it as much and realise how hard it is."