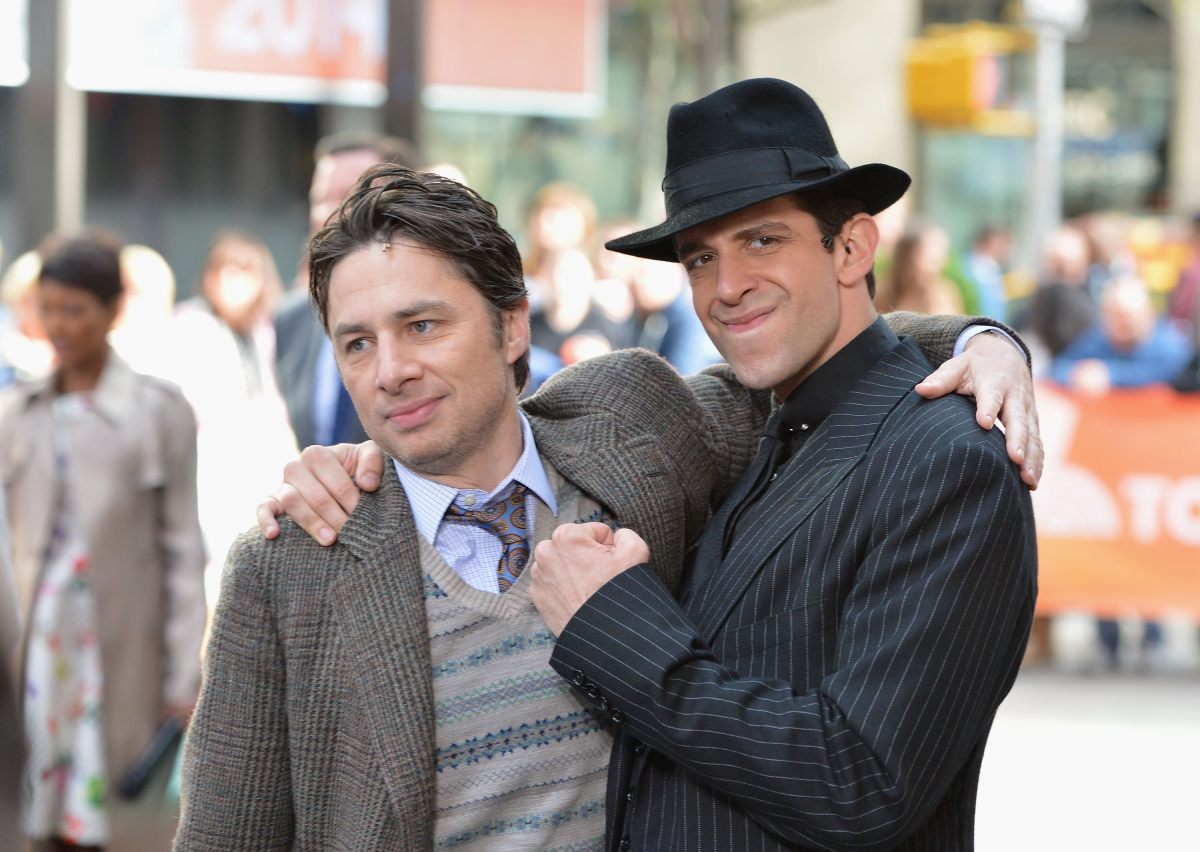 Nick Cordero met Zach Braff back in 2014 while performing in Bullets Over Broadway. Cordero played strong-armed gangster Cheech, a role that earned him a Tony nomination. While Braff starred as David Shayne, a playwright who’s getting his first play produced on Broadway. Their version of the show only lasted a few months on the Great White Way.

But Cordero and Braff’s friendship grew into something bigger than the two of them. Ahead of the 2021 Tony Awards, here’s the story of how the friendship between a beloved Broadway performer and the star of Scrubs ended in heartbreak.

Nick Cordero was ‘a tough-looking guy’ who sang like Sinatra

Braff was starring in Bullets Over Broadway when Cordero took over the role of Cheech from Bobby Cannavale. The Scrubs star said on the Fake Doctors, Real Friends podcast that at the time, Cordero was an unknown. But he ended up blowing everyone away with his performance.

“Nick came in and no one had heard of Nick before — I hadn’t heard of Nick before — and he starts singing, and everyone dropped their jaws on the floor,” Braff recalled. “This unknown guy who is like 6’5″, big tough-looking guy and then he sang like Sinatra. He had the most amazing voice and everyone’s jaws are on the floor, including one of the beautiful dancers in the show, Amanda Kloots.”

Braff says that he and Nick Cordero were working non-stop on Bullets Over Broadway, and they “just bonded.” He explained that after you do a show, your adrenaline is pumping. So, the cast would go hang out afterward, and party late into the night in Manhattan. The Scrubs star recalled that everyone would eventually end up at his place and they made “so many great memories together.”

Braff would later cast Cordero opposite Morgan Freeman in his movie Going in Style. At the same time, Cordero and Kloots fell in love and got married. They moved to Los Angeles to “kick-start the next chapter” of Cordero’s career in television. And, the couple welcomed a son they named Elvis.

“They were just in love and so happy, and it was like the American Dream. This beautiful couple, the white picket fence house, the brand new baby,” Braff said.

Braff says that he has honestly never known a kinder person than Cordero. He described him as “one of my best friends in the world.” But in March 2020, tragedy struck when Cordero was taken to the emergency room. He ended up testing positive for COVID-19. And, despite the fact that Cordero was only 41-years-old and in great health, the virus ravaged his body.

Cordero spent more than 90 days in the hospital, and had his leg amputated due to blood clots. The Broadway actor was also on dialysis, a ventilator, and needed a pacemaker. Cordero put up a good fight. But at 11:40 am on July 5, 2020, he passed away from complications due to COVID.

Braff gave details of Cordero’s battle. He explained that his blood pressure wasn’t strong, so the tips of his fingers and toes were blackening. If Cordero had lived, they would have been removed.

“Just for clarity’s sake, he didn’t have COVID anymore. What COVID did to Nick is what it does to a lot of people –it comes and wreaks havoc on your body and then leaves. You’re left with, what the doctors call, lungs that look like Swiss cheese,” Braff explained.

“They said it looked like he had been a heavy smoker his entire life. And he was on every machine they could put him on, and towards the end, they were all on full. He’d have days where he was doing ok and everyone would get excited–and then it would all kind of go back to zero. The machines were really, truly keeping him alive.”

Braff explained that it was “tragic” because Kloots would be sobbing 10 feet away from him and his girlfriend, Florence Pugh, but they couldn’t go hug her. He also revealed that Kloots wasn’t able to see Nick Cordero in person after she dropped him off at the hospital. She thought he would be there for a few hours. But, “she was never able to see him fully conscious again.”

“Can you imagine how tragic this is, your partner’s in the hospital, you can’t even be there? You can’t be by their side, you can’t hug them, you can’t kiss them, you can’t cheer them on. You have to do it over FaceTime that a generous nurse has arranged,” Braff said.

Braff revealed that in Cordero’s last text to him, he asked him to take care of his wife and one-year-old son. That was a promise that Braff didn’t hesitate to make.

“We’re all going to be doing our part to give this child an extraordinary life,” Braff said on behalf of himself and Donald Faison. “I promise that I’m going to do that for the rest of my life and I want to make him proud … you and I are going to be very involved in his life.”