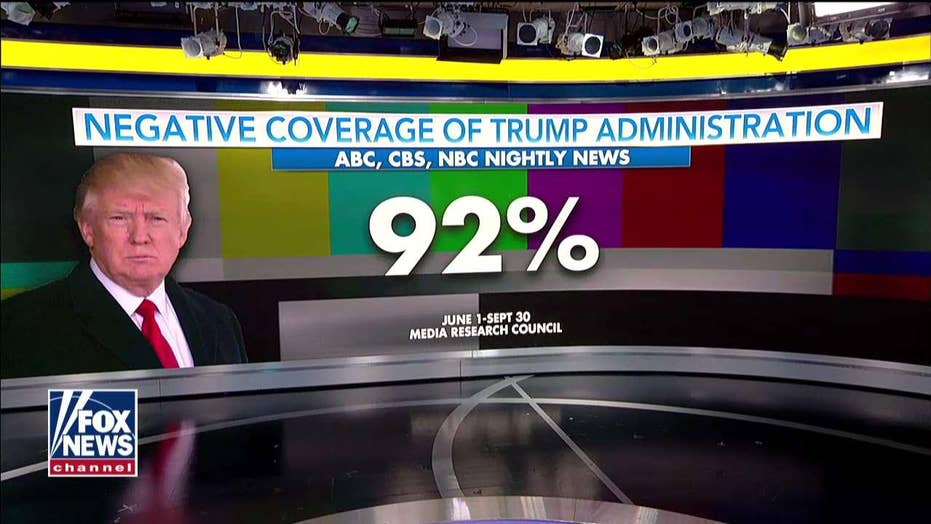 The midterm elections are fast approaching and voters who rely on broadcast networks for their news coverage are seeing an overwhelming amount of negative news related to President Trump, according to a new study.

The Media Research Center analyzed 1,007 evening newscasts that aired on ABC, NBC and CBS from June 1 to September 30. The results show that a whopping 92 percent of Trump-related coverage was negative, compared to only eight percent that was positive as the economic boom was largely ignored.

The MRC findings show that nearly two-thirds of coverage on ABC’s “World News Tonight,” NBC’s “Nightly News” and CBS’ “Evening News” was about one of five topics. The areas of focus on what the MRC called “TV’s Trump-bashing agenda” were the Russia investigation, immigration, Brett Kavanaugh, North Korea diplomacy and U.S. relations with Russia. But the broadcast networks don’t exactly focus on the positive aspects of these polarizing topics.

“The networks’ coverage of all of these topics has been highly negative, while bright spots for the administration such as the booming economy received extremely little coverage,” MRC senior editor Rich Noyes wrote.

Noyes’ study indicates that the Russia investigation received the most coverage during the four-month sample – which is also the topic that has been covered the most on the evening newscasts since Trump took office.

“Virtually all of that coverage has been negative, while almost none of it has focused on any of the controversies involving Mueller or his investigative team,” Noyes wrote.

The study showed that Kavanaugh became the hottest topic among evening newscasts in mid-September, when he was first accused of sexual misconduct allegations. According to the study, the allegations were covered eight times more than Kavanaugh’s judicial record and philosophy.

Trump often mocks the mainstream media as “fake news” and has long declared that liberal news outlets don’t treat him fairly. A separate study, conducted by The Hill and HarrisX polling, found that 45 percent of voters felt Kavanaugh coverage was biased against him.

"People don't trust the media very much… they tend to think that there is bias,” pollster Molly Murphy told Joe Concha on Hill.TV when discussing the study.

The MRC study reveals that less than one percent of airtime was spent on the economic achievements of the Trump administration.

“The only aspect of the Trump economic program that interested the networks during the past four months has been the President’s use of tariffs to push for better trade deals,” Noyes wrote, adding that “coverage of Trump’s trade policy emphasized the downside.”