Motsi Mabuse reveals her husband's parents are stranded in Ukraine

Motsi Mabuse has revealed her husband’s parents are stranded in Ukraine and are unable to reach the Polish border, after Russia invaded the country in the early hours of Thursday morning.

The Strictly Come Dancing judge, 40, took to Twitter to say she was ‘heartbroken’ after she had spoken to her ‘crying’ mother-in-law who has ‘no possibility’ of fleeing to Poland.

A fearful Motsi, who is married to fellow dancer and Ukrainian Evgenij Voznyuk, wrote: ‘It’s heartbreaking hearing my mother in law crying this morning, afraid and there absolutely nothing we can do! Just Sad honestly.’ 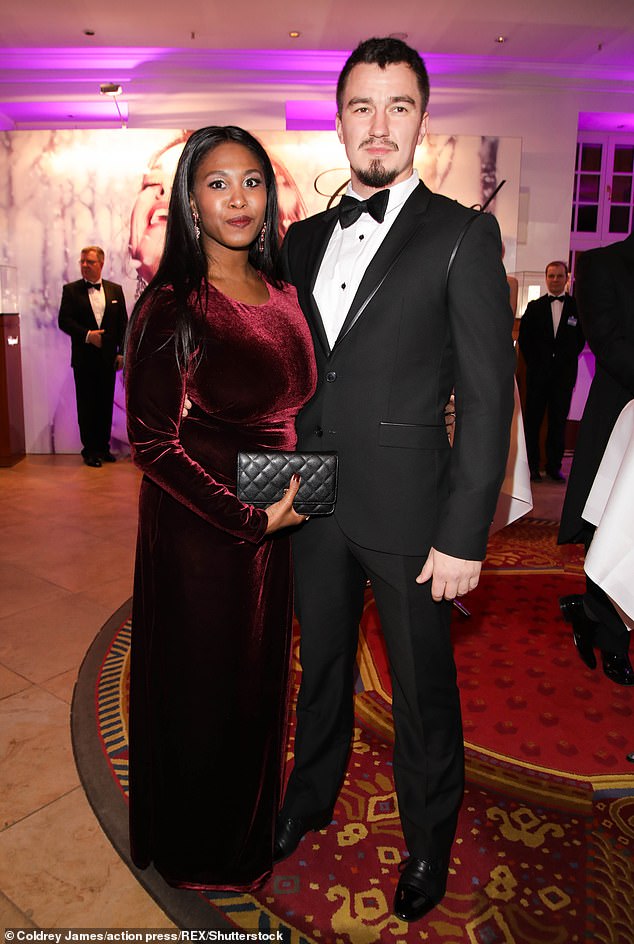 Heartbroken: Moti Mabuse has revealed her husband’s parents are stranded in Ukraine amid the Russian invasion (Pictured with Ukrainian husband Evgenij Voznyuk in 2018) 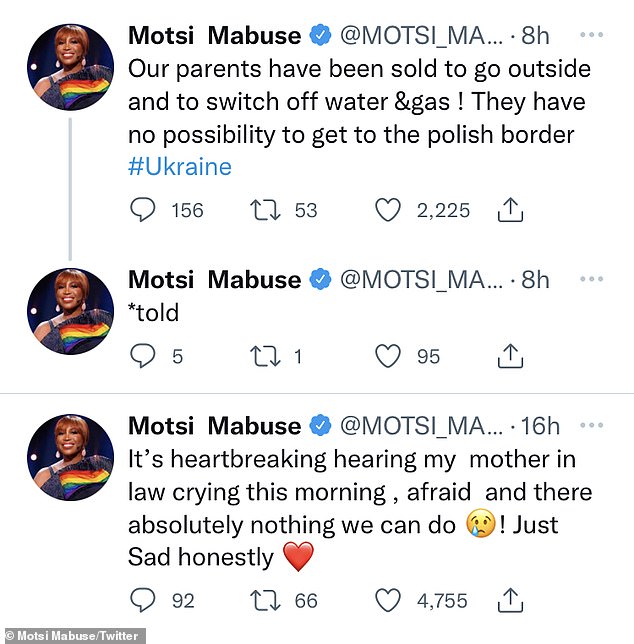 Social media post: The Strictly Come Dancing star, 40, took to Twitter to say that she was ‘heartbroken’ after she had spoken to her ‘crying’ mother-in-law this morning

Motsi added: ‘Our parents have been told to go outside and to switch off water &gas ! They have no possibility to get to the polish border.’

She had previously tweeted: ‘This cannot be happening!!!!!!!!!!!’ and asked for ‘prayers for Ukraine and the world’.

Motsi and Evgenij married in 2017 and share a daughter whose name has never been publicly revealed. 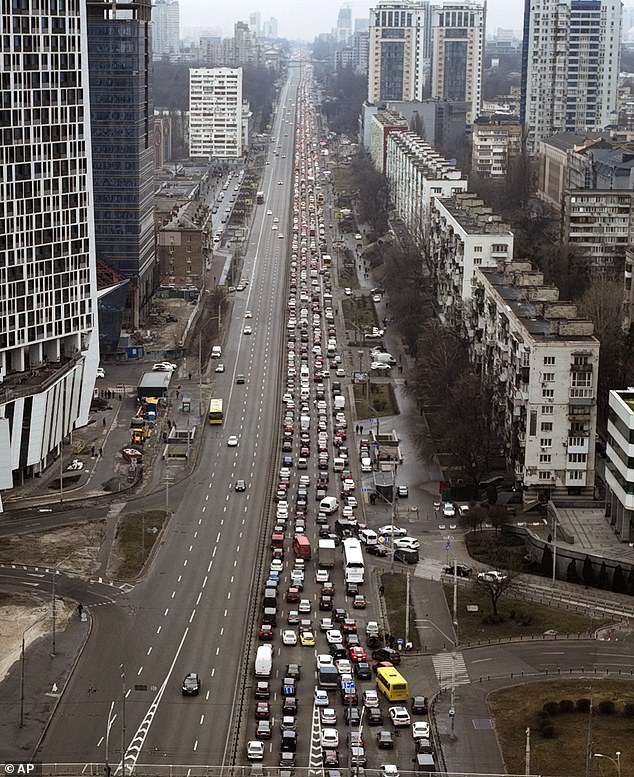 Stranded: The TV judge, who is married to Ukrainian Evgenij, added they were unable to get to the Polish border (Picture: Traffic jams are seen as people leave the city of Kyiv, Ukraine)

Motsi married her first love Timo Kulczak, 42, when she was just 22.

But over a decade later the couple called it quits when Motsi realised she wanted to be with her dance partner Evgenij as she told The Sun: ‘Three years later whoosh! And then I was married’.

It comes after Vladimir Putin personally gave the order to attack Ukraine at around 5am on Thursday, unleashing a salvo of rocket fire in order to knock out the country’s military command structure. 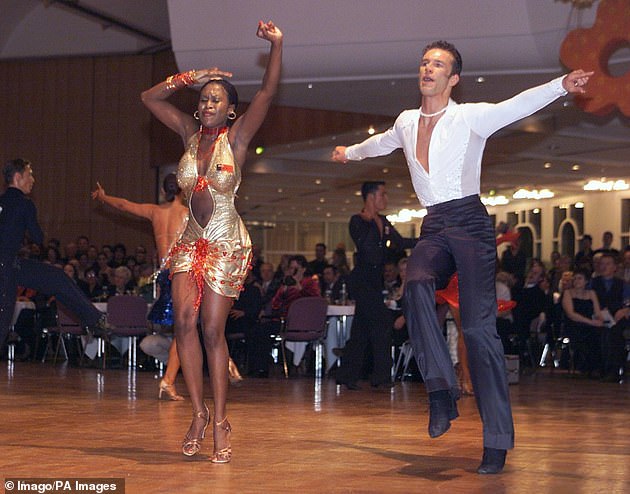 First love: Motsi married her first love Timo Kulczak, 42, when she was just 22 (pictured dancing together in 2001)

American officials said this was merely an ‘initial phase’ of the attack, and that the majority of Russia’s 190,000 troops at the front remain in reserve. The goal of the attack is to ‘take key population centres’ and ‘decapitate the Ukrainian government’, the officials added. 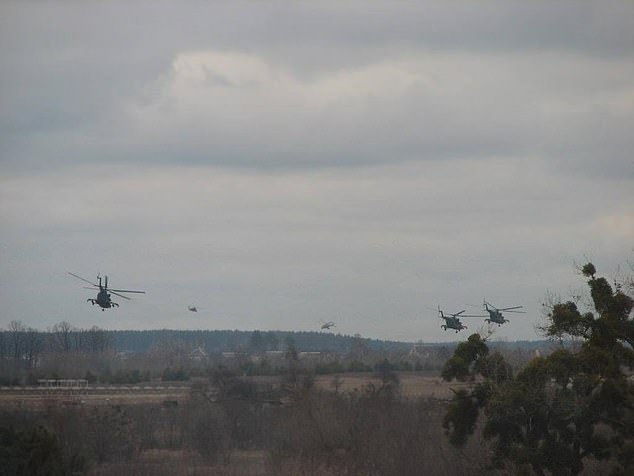 Invasion: Attack helicopters are pictured flying over the Kyiv region of Ukraine after dozens of Russian aircraft attacked the city

Ukraine’s health ministry said so far 137 people have been killed on the first day of conflict, while 300 have been wounded.

The port cities of Mariupol and Odessa, where Ukraine’s main naval bases are located, were also attacked – though Odessa appeared to remain under Ukrainian control as of Thursday afternoon. Russian tankers blockaded the Kerch Strait, leading from the Back Sea to the Sea of Azov, cutting off Mariupol. 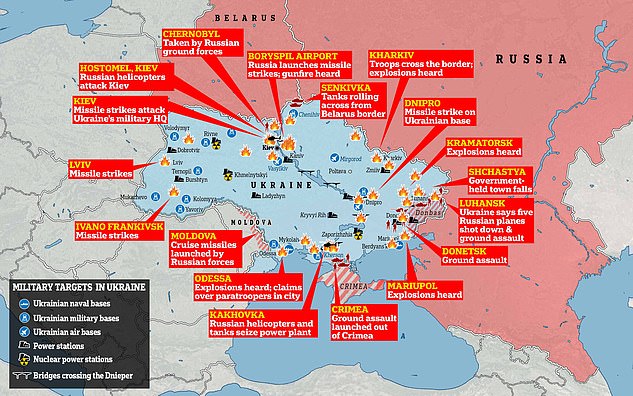 War: The attack has come to Ukraine on all fronts with bombs and missiles dropped on targets across the country in the early hours, followed by troop attacks from Crimea, the Donbass, Belgorod and Belarus as well as helicopter landings in Kyiv and at power plants on the Dnieper River. Chernobyl nuclear power plant has also fallen to Russian forces

A Russian AN-26 military transport aircraft also crashed in the southern Voronezh region, killing its crew on board.

The accident could have been caused by a technical failure and has not inflicted any damage on the ground, Interfax said, citing a press office of Russia’s western military district.

In the address to his nation, Zelensky also described Russia as ‘evil’ and said Putin had attacked ‘like a suicidal scoundrel… just as Fascist Germany did in World War II’.

‘Ukraine will not surrender its freedom, whatever Moscow thinks,’  he added. ‘For Ukrainians independence and the right to live free on our land is the highest value.’ 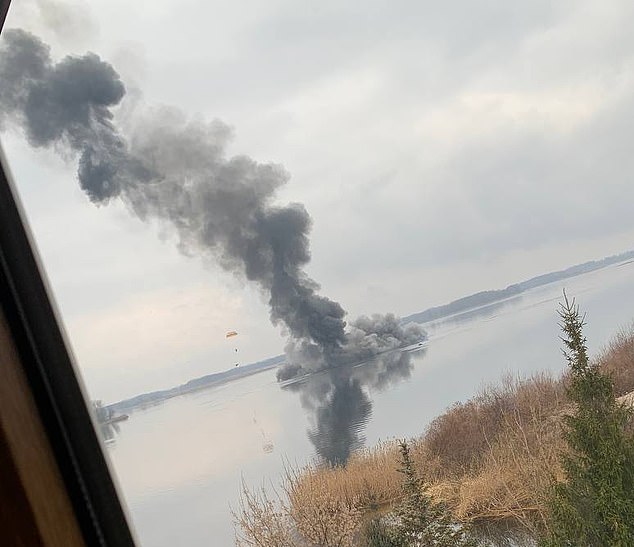 Crash: An image captured near Kyiv shows what appears to be the wreckage of a downed Russian attack helicopter with a soldier parachuting out of it (to the left of the frame)