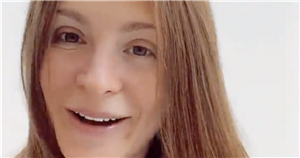 Millie Mackintosh informed followers on Thursday of a rather intimate task she asked husband Hugo Taylor to perform to help her struggle with mastitis.

The 30 year old revealed earlier this week that she has the painful condition – an inflammation of the breast tissue that leads to nipple discharge, flu-like symptoms and sometimes infection – and was desperately trying to find ways to soothe it.

Speaking on Instagram Stories about the routes taken in attempt of treating her painful condition, Millie confessed to asking husband Hugo to carry out one method.

“I have asked Hugo to try sucking out the blockage, but he is not keen so we won’t be trying that,” the former Made in Chelsea star said laughing.

The couple's relationship has been going strong in the years since they got married in 2018 — but evidently Millie's request was a step too far.

All hope was not lost though for the mum-of-two though, as after receiving many responses giving advice on her mastitis, she shared another update with her followers.

“Thank you so much for all your advice on mastitis. I’ve had so many lovely messages,” Mille said.

“I’m on antibiotics and I went to a women’s health physio yesterday and had a really painful, but effective massage and that has definitely helped a little bit and also they used a, like, an ultrasound machine to help break down the blockage.

“The area is still really sore but it’s actually not red anymore because the skin was like bright red, so that’s good.”

The ex-reality star added that she was going to try one other method to improve her condition, after her request to Hugo fell flat.

“I’m going to try is Epsom salts in with hot water in a hacker pump because loads of you said to try that.”

While Millie had said that she was open to trying nearly any method to treat her mastitis after fretting that her breastfeeding journey with baby daughter Aurelia might end soon, there was one suggestion she wasn’t willing to try.

After a follower advised her that “feeding on all fours dangling boobs like a cow” helped with drainage, Millie wrote that the this tip was “a bit too far for me” before adding a laughing with tears emoji.

Mastitis often occurs in mothers who are breastfeeding and those with it are recommended, according to the NHS website, to continue breastfeeding to help improve it, along with having massages and warm soaks.