Joy Behar urged Meghan McCain to ‘show some respect’ and Whoopi Goldberg repeatedly went to commercial as Meghan McCain implied that they don’t take anti-Semitism seriously on ‘The View.’

The View descended into chaos on the May 24 episode after the co-hosts started a lively debate about Rep. Marjorie Taylor Greene‘s anti-Semitic remarks. While Meghan McCain believes that Greene’s remarks were abhorrent, she questioned why Rep. Ilhan Omar, a Democrat, wasn’t treated with the same vitriol by her colleagues in 2019 for a controversial tweet.

When Whoopi Goldberg argued that Omar was reprimanded by House Speaker Nancy Pelosi, the yelling began. Meghan began listing anti-Semitic attacks that have occurred in the United States since the current conflict between Israel and Palestine began. As she continued to yell, switching the topic back to Omar, Whoopi, audibly frustrated, announced they were going to commercial. Meghan demanded to know why she was being cut off. “I’m cutting you off because we have to go, Meghan! Why do you think I’m cutting you off?” Whoopi yelled back.

The fight was just beginning. As they came back from break, Whoopi asked Meghan to finish her point (which was that there can be anti-Semites on the left). Again, Whoopi tried to say that Democrats did punish Omar in 2019 when she tweeted “it’s all about the Benjamins” in response to Rep. Kevin McCarthy calling her out for being critical of Israel. “Let me point out that when Ilhan Omar made her equally ridiculous comment, Nancy Pelosi snatched her up,” Whoopi said, before Meghan interjected.

Whoopi asked Meghan to let her finish her thought, but, as it normally does on The View, things got out of hand. Sighing, Whoopi told Meghan “I don’t know what you’re talking about anymore.” After back and forth (and a word from Sunny Hostin) Meghan began speaking about specific anti-Semitic hate crimes she’d heard about — Jewish people getting attacked in a Los Angeles restaurant, a pipe bomb being thrown at Jewish women in Ramle, Israel, and a man wearing a yarmulke getting beaten in NYC.

“I just wish we could bring that same energy toward hate crimes directed toward Jewish people, as we do toward every other minority group,” Meghan declared. Joy Behar got involved. “I resent that remark. I’ve been talking about anti-semitism on this show for 25 frickin’ years. Don’t tell me what I’m supposed to be saying, Meghan,” She said, scoffing. “You do your thing, we do ours… have some respect once in blue moon.” 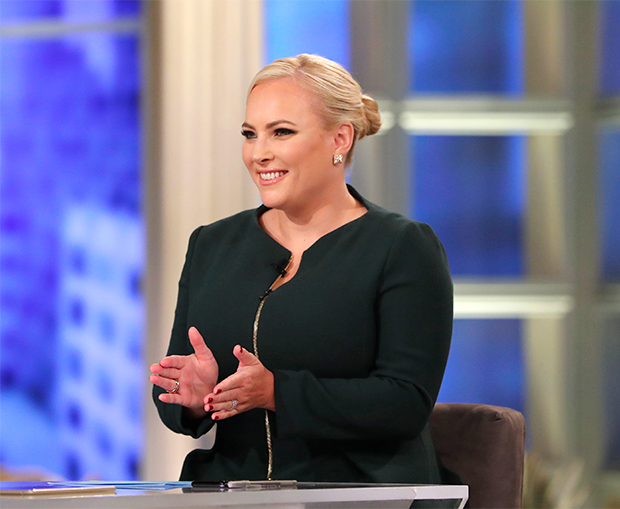 A frustrated Whoopi immediately cut to commercial again. And just like that, everything was alright again when they returned from break, on to a new topic.