AceShowbiz –
Meghan Markle has once again made headlines with her outfit, but not because of the style. Attending Princess Eugenie and James Brooksbank’s royal wedding on Friday, October 12 with her husband Prince Harry, the former actress donned a navy dress by Givenchy designer Clare Waight Keller, who also created her wedding gown.

But instead of showing off the dress, the 37-year-old raven beauty covered it up with a long, loose-fitting coat in a matching color that she kept buttoned up even when she’s inside the church. She completed her look with a matching headpiece and high heels. 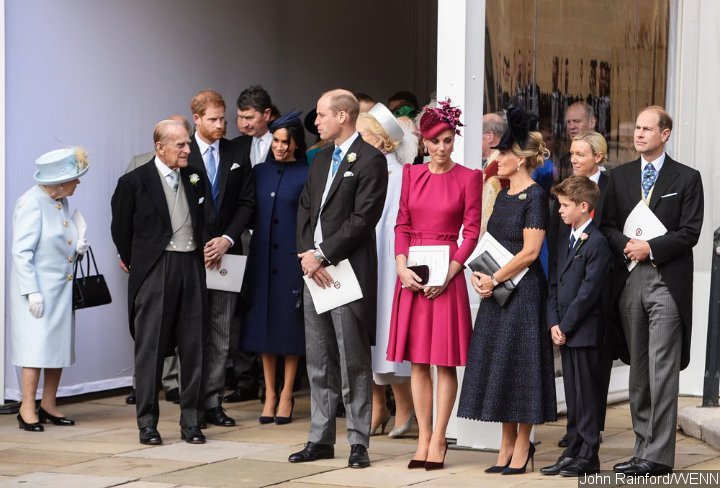 Meghan isn’t one who is shy to show off her curves as she has often stepped out in form-fitting outfits for royal engagements. There’s no restriction either for the royal wedding guests to not show a waistline with their dresses, with Meghan’s sister-in-law, Kate Middleton, opting to show off her slim waist in a raspberry pink dress by Alexander McQueen.

Meghan outfit, of course, has raised speculation that she’s already pregnant with her and Prince Harry’s first child. “Judging by the fact that she’s wearing a heavy coat indoors, Meghan Markle is either pregnant or the type to get chilly easily,” one Twitter user commented. Another wrote, “Something about Meghan’s outfit choice makes me think she’s pregnant and hiding a baby bump. It’s so conservative.”

Fueling the rumor, a local tour guide in Fiji has accidentally revealed that Meghan might not be visiting the area when the Duke and Duchess of Sussex embark on a royal tour later this month. A travel advice was released in late July by the country’s Ministry of Health & Medical Services that urged visitors to protect themselves from mosquitoes since there’s a risk that the Zika virus might be spreading in the country. Zika infection during pregnancy can cause serious birth defects. Thus, only Harry will reportedly visit the area.

This is not the first time Meghan was hit with pregnancy rumor since she and Harry tied the knot in May. Back in September, her royal blue Jason Wu dress with ruffles over the stomach area which she wore for the 100 Days to Peace Gala in London also raised the same speculation.

A Kensington Palace source, however, denied the rumor, claiming that it was just a case of “an unflattering dress and wind.” The source also insisted that Meghan and Harry are focusing on “their official work … before starting a family.”