Maci Bookout Lashes Out at Critics: I’m NOT Being Lazy! I’m Sick! 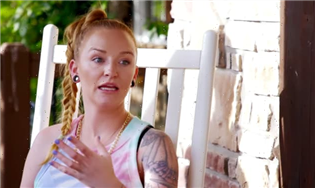 Teen Mom OG fans have long been divided on the subject Maci Bookout.

Some buy into the version of herself that she presents on TV and social media, while others feel that Maci puts too much effort into convincing fans that she’s some sort of ultra-badass supermom.

The first group praises Maci for her devotion to her children and her dedication to her business ventures.

Others point out that she seems to have a lot of free time and has never held what most people would describe as a “real job.”

However you feel about Maci, there’s no denying that she’s come under greater criticism than ever in recent weeks.

Perhaps without the distraction provided by the human trainwreck that is Ryan Edwards, Maci’s followers have decided to focus on her shortcomings.

Or perhaps this is a form of punishment in reaction to all the unethical, irresponsible clickbait that Bookout posts on her page.

Whatever the case, she’s been under more scrutiny than ever in recent weeks.

And it’s led to some genuinely unfair criticism.

As we previously reported, Maci suffers from polycystic ovarian syndrome, a condition commonly referred to as PCOS.

On Tuesday’s episode of TMOG, Maci’s husband, Taylor McKinney, informed producers that she would not be able to participate in that day’s filming due to a flare-up of her condition.

The feeling among many fans of the show is that since the ladies aren’t forced to punch in at a work site or sit at a desk from 9 to 5, their devotion to the job that made them rich and semi-famous should be 100 percent.

And so, when someone like Maci decides to take an impromptu day off — even if their reasons for doing so are legitimate — they become vulnerable to criticism.

Many fans felt that Maci was being lazy by staying in on bed on the day in question, and they took to Twitter to make their feelings known.

“Oh for f–ks sake Maci… I have PCOS, it’s HELL,” one tweet read, according to The Ashley’s Reality Roundup.

“But I still get up everyday, put on my big girl panties and handle my shit. Homeschool my kids, house work and run my own business. Stop using it as an excuse.”

Clearly, the comment really hit a nerve with Maci, who proceeded to inform the random hater that she’s way off base.

“I still do all of that… every single day. I needed to rest for an hour instead of filming B roll,” Bookout tweeted.

“I do house work, run my businesses, pick my kids up & get them to their extra curricular activities, make dinner etc. What I do NOT do, is criticize anyone suffering from PCOS!”

The user replied by saying “it’s literally your job to film” and accusing the mom of three of “blaming everything on PCOS.”

This further enraged Maci who blasted the fan for her ignorance before wishing her the best in her continued health journey.

“The fact that you said you have PCOS, then went on to say PCOS is ‘really not that serious’ kind of shows me that responding to your ignorant comments is a waste of my time,” she wrote.

“I wish you nothing but the best and hope your pcos journey continues to be as smooth as possible,” Maci concluded.

We understand that offering up commentary on the stars’ actions is one of the fun parts of reality TV fandom.

But if your particular brand of criticism requires you to make light of someone’s legitimate health issues, maybe it’s better to just keep it to yourself.