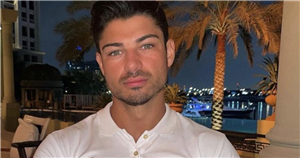 Love Island's former star Anton Danyluk has opened up on being lucky "to be alive" after he was involved in a scary car crash.

The reality TV star shared a terrifying snap of his crushed car and revealed he felt "blessed" after he collided with a bus in Dubai.

The 27 year old bodybuilder claimed that he has to have "eyes in the back of his head" in the middle-eastern city, where he's currently residing, as the motorists operate quite differently on the roads to what he's used to.

He told his followers: "Those who drive in Dubai will know the drivers are mad out here always rushing about you have to have eyes in the back of your head.

"Feeling blessed to be alive after this last night.

"I will update you all later to what happened but I’m okay just feel so grateful that no one was hurt," the Scottish social media star continued.

Anton later returned to his Instagram page to explain the full experience to his followers, revealing he'd been heading home from the gym when the incident happened.

"So basically last night when I was driving home from the gym, a bus came across me, I've had a lot of messages people know what it's like," he said.

"The guys who drive in Dubai are just always in a rush to get places and basically a bus came across me and he's braked hard because he's went over a speed bump."

"Then I've went into the side of the back of him, and I don't know how I'm okay – air bags are obviously a good thing," Anton went on.

"But yeah, I'm okay. We move, car's damaged but obviously it's a rental anyway so it doesn't really matter."

Anton added he was grateful to be ok and thanked his fans for "the love" as he recovered from the traumatic experience.

It comes as the star recently shared a post talking about how happy he was to be back in the sunny city in the United Arab Emirates.

"First chill day in Dubai since arriving back," he told his 1million followers as he relaxed by the sun loungers.

"And no other place I’d rather be than @trainbeachclub #blessed," Anton added.