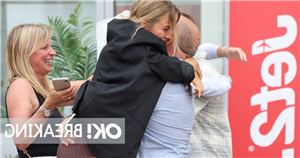 The Love Island 2022 finalists have arrived back in the UK from Mallorca where they were greeted to an emotional reunion with family and friends.

The reunion follows a dramatic final which was broadcast live from the Love Island villa on Monday 1 August.

Ekin-Su and Davide were crowned the winners of the series, followed by Gemma and Luca in third place, Dami and Indiyah in second place and Tasha and Andrew in fourth.

Arriving back on UK soil at Stansted Airport, winning couple Ekin-Su and Davide looked more loved up than ever as they held hands when walking through the gate.

Dressed in casual attire, the couple couldn't keep their hands off each other as they put their arms around each other and kissed as they posed for photos.

Prior to flying home, Ekin-Su and Davide made things Instagram official as they posed for their first post together since leaving the villa.

Taking to her Instagram stories, Ekin-Su shared a video of Davide hugging and kissing her, while she said: "England baby."

According to ITV figures, Ekin-Su and Davide won the Love Island final by 63.69% of the final vote.

Showing their appreciation to their followers after they won the series, Ekin-Su said: "Thank you everyone for voting us and thank you for making us who we are."

Davide then added: "I didn't expect, I still don't believe it," to which Ekin-Su said: "I can't believe it, I think everyone's winners in here and I just feel really lucky to be here."

"We are all four great couples, but yeah thank you for everyone" Davide stated.

Ekin-Su then added: "Thank you for everyone, literally for going on our journey with us, it means so much, so much."

Speaking in Italian, Davide then said: "Grazie a tutti for voting us," while Ekin-Su shouted: "We love you, ti amo!"