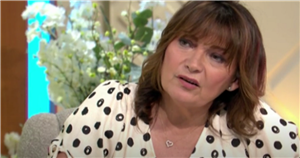 Lorraine Kelly has told Andi Peters how she wishes she'd stood up to racists in the past, but admitted she was too embarrassed to tackle them.

The pair were discussing the racist abuse that members of the England football team have been subjected to on social media in Tuesday morning's Lorraine and the presenter spoke up on feeling annoyed with herself at not having called out comments previously.

As they talked about Marcus Rashford, Tyrone Mings, Bukayo Saka and Jadon Sancho having received abuse from trolls, Andi pointed out that some of the abusers could have even been helped by Marcus's free school meals voucher campaign for families living in poverty.

He said: "People who've levied racist comments towards him, some of those people, quite possibly their children could have been fed because of the good work Marcus has done, and you then abuse him on Twitter because you think that's fine. It's not fine."

Andi added: "We do live in a world still where people have those thoughts day in day out. One of my friends was in the pub when he heard the n word and he stood up to the person saying it, but you know that takes a lot of courage."

Lorraine admitted to not having stood up to similar comments in the past.

She said: "It does, I think we've got to do that more. There's been occasions where I should have stepped up and I didn't out of I guess embarrassment more than anything else and not quite sure what to do."

Andi told her: "You walk away feeling slightly uncomfortable, 'I should have'."

Lorraine agreed: "Very much so, yes, and annoyed with myself."

He continued: "Lorraine, I've been there as well. Someone said something to me in a restaurant and I thought, oh I'll just let it pass. No, I should have asked them, explain what you've just said."

Lorraine added: "And try and educate them."

Andi, who spoke passionately about the need to change attitudes towards what was accepted on social media on Good Morning Britain earlier in the day, agreed that education was key.

He said: "I've said all along there is an education piece to be done about being Black British as well as White British, they're both equal but a lot of people don't realise that."

On Tuesday's Good Morning Britain he had called out Richard Madeley for "wishful thinking" in wondering whether the tide was turning against racism, saying he didn't believe he would see equality in his lifetime.