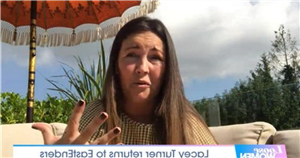 Loose Women descended into chaos on Thursday as an interview with iconic soap actress Lacey Turner was cut short.

The EastEnders star appeared via video link on the ITV daytime show where she discussed her return to the popular BBC One soap after a six-month hiatus.

The 33 year old was also asked about her marriage to her husband Matt and their second child, a sweet baby boy called Trilby, who arrived in February.

However, when Lacey attempted to answer the question, her camera permanently froze, which left the panellists in the studio disappointed that their interview was over.

The panellists were soon left in a fit of hysterics after producers began playing the EastEnders theme tune over the technical blunder.

Lacey has returned to work after maternity leave from the BBC soap and recently told OK! that her and husband Matt were "completely besotted" with their son.

It comes as the actress and her husband now share two "miracle babies" after suffering from two devastating miscarriages.

Just over a year later, the couple were overjoyed to welcome their first child together, daughter Dusty.

The Our Girl star recently revealed she would be heading back to Albert Square soon, and her character is set to plunge straight back into a mammoth storyline.

After her last scenes aired in April, Stacey was wrongly sent to prison by Ruby (Louisa Lytton), so it stands to reason Lacey's return will see her character released early.

"I'm really lucky because although with a big storyline you can be working like any full-time job, there are a lot of times when I'm not needed so it works out perfectly," the star told OK!

"I also live not too far away from the studios so that always makes things easier, and I can pop home between filming.

"I'm always home for bath and bedtime, too," she added.