Lily James looked just like Pamela Anderson as she donned the red one piece while shooting the ‘Pam & Tommy’ miniseries in Malibu!

Lily James is serving up all the nostalgia! The 32-year-old absolutely slayed in the iconic red Baywatch one piece as she transformed into Pamela Anderson, 53, for the role. Lily, of course, is set to play the blonde bombshell in the upcoming Hulu miniseries Pam & Tommy alongside Sebastian Stan, 38. In the photos, Lily looked just like Pam with her longer blonde hair and frosted ’90s inspired makeup. At one point, she could be seen jogging along the sand as she recreated one of the action drama’s most memorable sequences — see the photos on DailyMail here.

The British born actress adjusted the swimsuit at one point, which showed of her glowing golden tan. With the wispy blonde bangs, bold black eye lashes and french manicure, her ensemble throwback ensemble was absolutely on point. Lily fully committed to the transformation, seemingly wearing prosthetics to recreate Pamela’s infamous bust (Pam underwent surgery to increase her cup size from 34D to a 34DD). In Baywatch, the Canadian star played lovable lifeguard CJ Parker alongside David Hasselhoff. The show is considered one of the biggest hits of the ’90s, hitting over a billion viewers worldwide on a weekly basis. 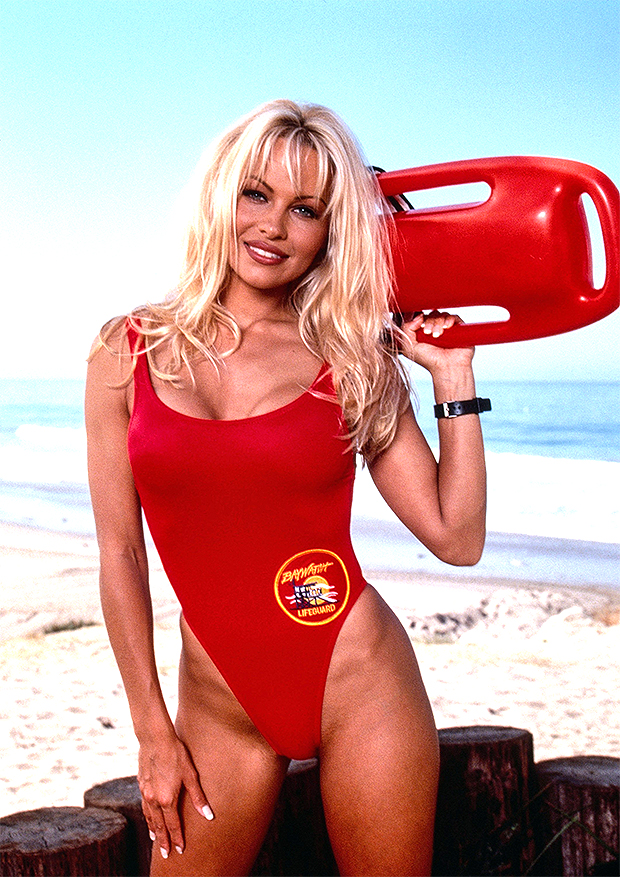 Last year, Pamela confessed that she not only still has her red Baywatch swimsuit — she even still wears it from time to time. “Oh, I have one right here in my top drawer! It still fits,” the B.C. native — who married Dan Hayhurst in January — revealed in an interview with FOX News in May 2020. “I have worn it on occasion just to be funny with my friends [and] just around the living room,” she went on, slipping in a joke that it’s a great outfit if she needs to give anyone “mouth to mouth.” At 53, Pamela looks absolutely incredible and we have no doubt that the swimsuit looks just as good her today as it did in the ’90s!

In a photo posted to social media last week, Sebastian also looked just like Motley Crue drummer Tommy Lee! Posing with Lily, the pair were in full costume in the black-and-white snap that looked like it could have been of the real couple from back in the day. Sebastian’s body was covered in tattoos just like Tommy’s as Pamela rocked a loose blonde updo. In the cheeky pic, she leaned over and playfully bit Sebastian’s left nipple ring. The series, which also stars Seth Rogen, 39, will follow the whirlwind romance Pam and Tommy, focusing on the drama around their stolen, then sold, sex tape.