After Kim Kardashian clapped back at haters who questioned North West’s art skills, the ‘KUWTK” star revealed that she still has the Hermès bag North turned into a ‘masterpiece’ seven years ago!

“I just wanted to look at this masterpiece, guys,” Kim Kardashian said in an Instagram Story posted on Tuesday (Feb. 9). Amidst the drama around North West’s recent painting, Kim showed off the Hermès bag she got for her first Mother’s Day as a mom, a gift from her daughter. “This bag North painted for me when she was not even one-year-old. What a beautiful masterpiece. I knew she would be a great artist – right, North?” Kim then had North, 7, put her hand up against the orange handprint on the side of the bag to show how much she had grown since giving Kim this present.

The North West Hermès Bag is a significant artifact in Kardashian lore. “Kanye [West] had a box [with a Hermes purse in it], and I opened it up, and it was all painted really cool,” Kim said in 2014. “And on my computer was this message that said ‘Play,’ and it was a video of my daughter sitting outside painting the purse. “I had thought it was this new artist who had painted this purse [but] it was my daughter. It was amazing.”

The reason for Kim’s trip down memory lane comes after some fans questioned if North actually painted the artwork Kim shared on Feb. 8. “My little artist North,” Kim captioned a photo of North’s painting, which was an impressive nature scene, with a snow-capped purple mountain overlooking a pristine lake. The tree bark’s texture in the foreground and the reflection of the trees in the lake’s water drew comparisons to Bob Ross online, but some were skeptical that North did the artwork. This enraged Kim. 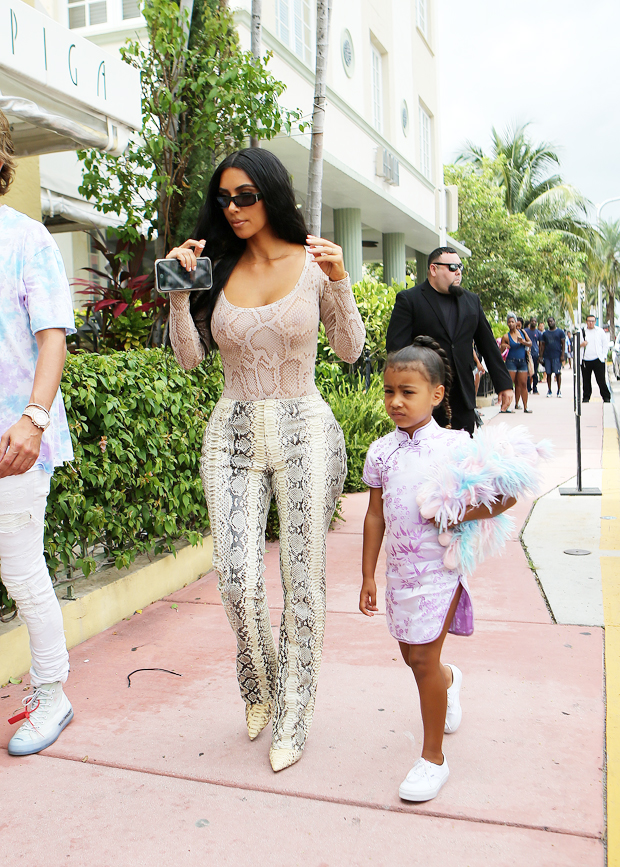 “DON’T PLAY WITH ME WHEN IT COMES TO MY CHILDREN!!!” she wrote in a Kanye West–style clapback. “My daughter and her best friend have been taking a serious oil painting class where their talents and creativity are being encouraged and nurtured. North worked incredibly hard on her painting, which took several weeks to complete.” Kim also reported a tweet that revealed the painting done by the daughter of Tracy Romulus, the chief marketing officer for the KKW brands. The painting was identical to North’s. “THEY GO TO THE SAME ART CLASS!!!” added Kim.

“As a proud mom, I wanted to share her worth with everyone. … How dare you see children doing awesome things and then try to accuse them of NOT being awesome!?!?! Please stop embarrassing yourselves with the negativity and allow every child to be GREAT!!!” she added. “NORTH WEST PAINTED THAT PERDIOTDDDDABCDEFGZFDT!!!!!!!!!!!!!!!!”