Former ‘Sex and the City’ star Kim Cattrall posted a heartfelt tribute about co-star Willie Garson in the wake of his tragic death. She called Willie’s death a ‘terribly sad loss.’

Kim Cattrall may be done with the role of Samantha Jones, but she’s still a part of the Sex and the City family. The Golden Globe-winning actress mourned the loss of Willie Garson, who played Stanford Blatch, in a Twitter post. “Such sad news and a terribly sad loss to the SATC family. Our condolences and RIP dear Willie xo,” she tweeted, along with a photo from the show.

Willie passed away on September 21 after a battle with pancreatic cancer. He was 57 years old. Many of Kim and Willie’s Sex and the City co-stars, including Cynthia Nixon, Mario Cantone, and Chris Noth, also posted tributes about their beloved Willie.

HBO released the following statement about Willie’s death: “Willie Garson was in life, as on screen, a devoted friend, and a bright light for everyone in his universe. He created one of the most beloved characters from the HBO pantheon and was a member of our family for nearly twenty-five years. We are deeply saddened to learn of his passing and extend our sincere condolences to his family and loved ones.”

Willie had recently filmed scenes for the upcoming Sex and the City revival, And Just Like That. His appearance in the revival will feature his last scenes as Stanford, who was one of Carrie Bradshaw’s best friends outside of Samantha, Charlotte, and Miranda. 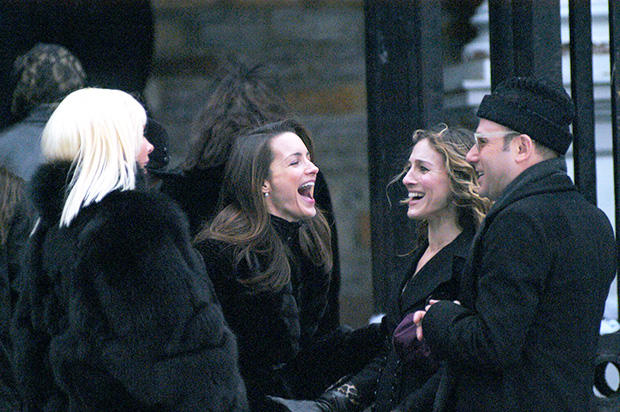 Over the years, there’s been serious tension between Kim and SJP, especially after negotiations for a third Sex and the City movie fell through. Kim told Piers Morgan in 2017 that she and her SATC co-stars had “never been friends.” She also said that Sarah “could’ve been nicer.” Willie even weighed in about the drama. “Dear fans, because I’m ‘toxic,’ I’m going to negotiate a contract for six months, not come to terms, then say I never wanted to do it anyway!” he tweeted.

SJP responded a few months later on WWHL. “That’s not the way I recall our experience,” Sarah said. “So, it’s sad, but I think what always ties us together is this singular experience. It was professional, but it became personal because it was years and years of our lives.”

When fans began to ask about Kim’s character in the revival, Sarah responded on Instagram, “Samantha isn’t part of this story. But she will always be part of us. No matter where we are or what we do.” Sarah also responded to a fan who claimed she and Kim dislike each other. “No, I don’t dislike her. I’ve never said that. Never would,” Sarah said.