Khloe Kardashian Claps Back at Troll: I’m Not Insecure! YOU Are! 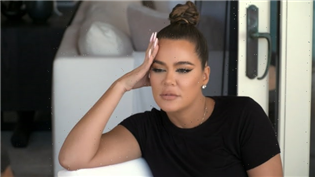 There has been so much said about Khloe Kardashian’s unedited pic and the psychology that drove her to hide it.

Countless fans are very concerned about her mental and emotional well being.

But some are just having a laugh at her expense as she continues to obscure her true looks.

Khloe looks at too many comments for her own good, and she is clapping back.

Khloe posed some very cool photos of herself modeling in colorful lighting.

She looked very good, and of course she did.

Even (especially!) without filters and photoshop, Khloe is a stunningly beautiful woman.

Many celebrities avoid reading their own comments, especially when they have been in hot water lately.

Khloe is not following that rule, and instead poured through her comments.

But this also means that Khloe saw some hurtful comments.

If she was meant to see them, she was likely not expected to respond.

“If insecurity [were] a person,” one commenter wrote, taking a jab at Khloe.

Instead, she opted to respond in a surprising way.

“Baby girl, you have to look in the mirror,” Khloe’s reply began.

She declared that “only insecure people tear other people down.”

That doesn’t sound wrong, does it?

“I’m sending you so much love, health, and happiness!” Khloe wrote.

There’s a bit of an edge, or underside, to that reply.

Is that reply patronizing, condescending, and more?

But that doesn’t mean that it wasn’t a smart way to respond.

It also doesn’t mean that there wasn’t some genuine compassion behind it.

Every now and then, you see someone make a cruel comment and it’s like their whole miserable existence flashes before your eyes.

Invariably, it comes from someone unhappy who feels powerless … and venting into the “void” of social media makes them feel better.

The problem with that, of course, is that social media isn’t a void.

There are real people on the other end, and even celebrities will sometimes see your tweets.

This can mean that people’s days are ruined … which of course makes some trolls want to do it even more to seek that thrill again.

So, Khloe showing some compassion, even if she was weaponizing it, is great.

The trouble, though, is that many of the people who talk about Khloe or comment on her photos aren’t trolls.

Some clearly are, but others are genuinely, legitimately concerned about her obvious body dysmorphia.

She put in a lot of work, the kind that only rich people have the time and resources for, into her “revenge body.”

Huge portions of Khloe’s schedule are dedicated to her fitness regime, and it shows.

But somehow, that’s not enough, and it’s not just her body that gives Khloe pause.

She distorts her face, filtering it beyond recognition, with alarming frequency.

Khloe insists that it’s not her fans’ business to talk about … seeing concern as the same as body-shaming. It’s just not.