Kamala Harris returned to the Senate floor after becoming Vice President-Elect, and got fist-bumps of congratulations from some of Trump’s staunchest supporters, including Sen. Lindsey Graham

No hard feelings? Despite one of the most contentious presidential races in history — and one that Donald Trump has yet to concede his loss — Vice President-Elect, Sen. Kamala Harris was welcomed back to Capitol Hill by some of her and President-Elect Joe Biden‘s staunchest detractors during the 2020 campaign. CSPAN cameras captured the 56-year-old getting a congratulatory fist-bump from South Carolina Sen. Lindsey Graham, who has been one of Trump’s fiercest allies. 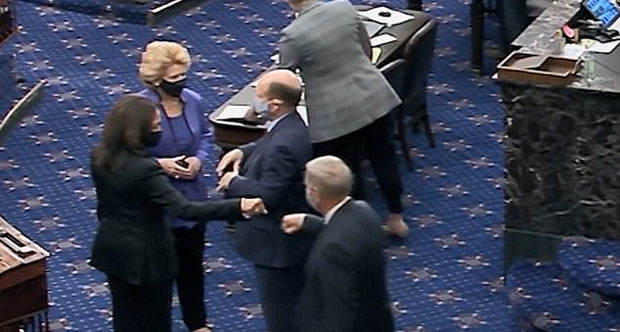 In video, Kamala could see someone just out of camera range approach her and put out her hand to wave at the person. She then made a fist for a friendly bump and it turned out to be Trump ally Lindsey who connected with her. The 65-year-old even gave Kamala a pat on the shoulder as he strode past her.

Graham has been at the center of a controversy surrounding the vote count in Georgia, as Georgia Secretary of State Brad Raffensperger implied on Nov. 16 that the South Carolina Republican allegedly hinted that he should discard some presidential votes during the state’s recount. 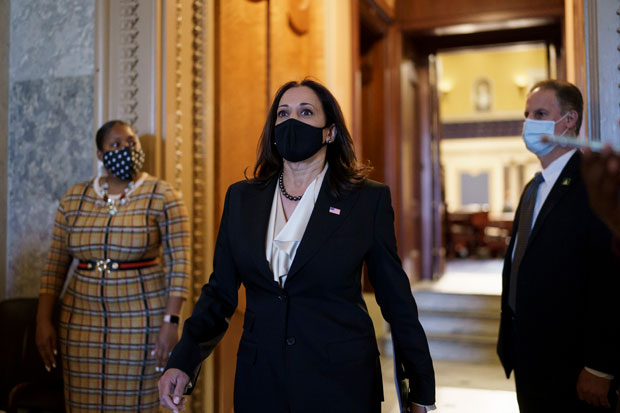 Kamala was also given a friendly hello by other Republican senators including Mike Rounds, Ben Sasse and James Lankford, even though the latter still believes the election is in contention and claims he was only being polite to Harris, CNN reported. “The election is not settled,” Lankford said. “So if you are trying to catch it and spin it however you want to — if someone walks right up to you, you say, ‘Hello, congratulations.’”

Biden and Harris were declared the victors in the 2020 presidential election on Nov. 7, four days after the election proper as mail in ballots took time to count in close states. Ever since then, Trump has refused to concede, while his legal team has been filing lawsuits demanding recounts in several close states. Harris has made history, becoming the first female, first Black, and first South Asian vice president-elect in United States history.