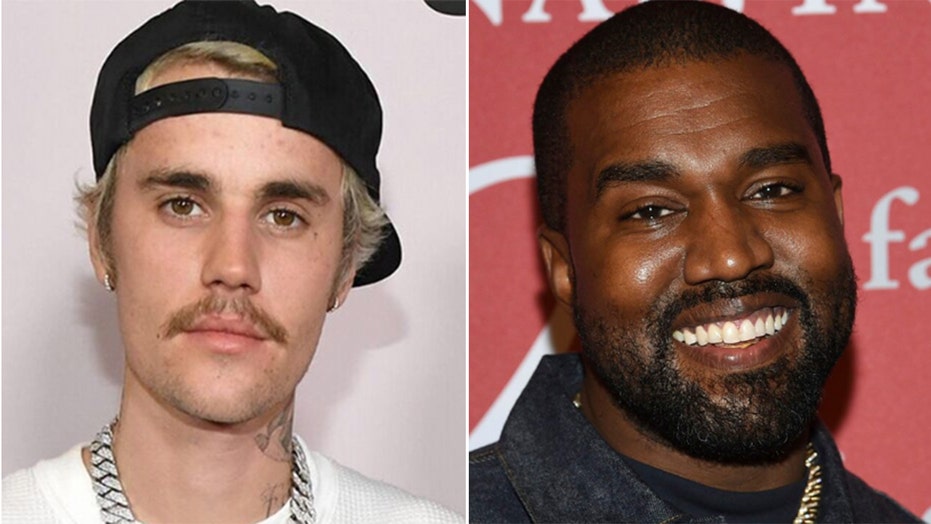 Justin Bieber paid a visit to Kanye West this week in Wyoming amid reports that the presidential hopeful has been distancing from his wife, Kim Kardashian.

Like much of his communication with followers and fans this week, West, 43, took to Twitter to announce the pop star's arrival.

"DD & JB discussing the new spray foam wall prototypes on the YZY campus," West tweeted along with a photo of one of his team members and the "Sorry" singer.

The "campus" West is referring to appears to be one of his properties near Cody, Wyo. where West has big plans to build a facility for his sneaker brand. The rapper told GQ in April that he has a 4,500-acre ranch there as well as a second 6,500-acre piece of land.

Based on the photo West shared with his 30 million Twitter followers, it appears the rapper has been busy in Wyoming working on some of his designs amid his presidential campaign efforts. The pic shows an ironing board and neon clothing dispersed in a garage.

Bieber has been active on social media himself this week, showing off his and wife Hailey Bieber's travels, which included taking a dip in a lake, lying in a field and numerous photos of an open sky. However, Bieber has yet to disclose what state the couple have been in and did not show any proof he was hanging out with West.

"A good way for me to find peace is to connect with nature. The earths beauty can remind of gods goodness. A lot of times we find ourselves holding ono the negative things in our lives. Watching animals graze, clouds pass, or simply putting your feet in the grass can take you away from your anxious thoughts and get you in touch with gods beauty.. the pain you and I all face does not come from god," Bieber captioned an Instagram pic taken earlier this week.

KIM KARDASHIAN AND KANYE WEST HAVE BEEN CONSIDERING DIVORCE FOR WEEKS: REPORTS

He continued: "A lot of us blame god for our current situations. God is not responsible for our pain in fact he is the opposite. He is our HOPE. HE IS LOVE! HE MADE THE ULTIMATE SACRIFICE SO THAT WE MAY BE SET FREE DIED ON THE CROSS! THANK YOU JESUS!"

Bieber's visit comes amid multiple reports that West and Kardashian have been exploring divorce. West himself claimed in a now-deleted tweet that he's been "trying" to divorce Kardashian since she traveled to New York for a prison reform event also attended by rapper Meek Mill. A source has since claimed to People that the pair have been discussing divorce "for several weeks."

Meanwhile, TMZ claims that West has been "refusing" to see Kardashian, who reportedly remains in Los Angeles, Calif.

Signs of a falling out between the Yeezy founder and reality star, who have been married since 2014, were made obvious on Monday night when his viral Twitter rant left fans fearing for his mental health. West threw shade at Kardashian's past with Playboy magazine and informed his mother-in-law, Kris Jenner, that she was no longer allowed around the couple's kids.

The social media scandal involving West and the Kardashian-Jenners erupted after the presidential hopeful criticized Harriet Tubman at a campaign rally and tearfully claimed that he and Kardashian considered abortion while pregnant with their first-born child, North, 7.