Jonathan Rivera and Fernanda Flores: Where Are These 90 Day Fiance Stars Now? 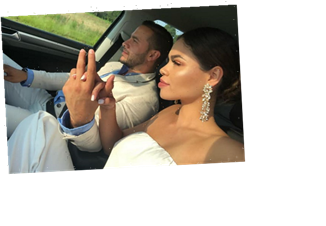 Where are they now? Soon, one of them will be returning to the franchise.

Jonathan Rivera is a real estate agent living in the modest sized town of Lumberton in North Carolina.

Having not settled down, he enjoyed his single life prior to his appearance on Season 6.

At 32, he met 19-year-old Fernanda Flores while on vacation at a club in Mexico.

The two hotties had an instant connection, and he ended up extending his vacation to spend more time with her.

Despite the eyebrow-raising age gap, Jonathan and Fernanda had some surprising things in common.

For example, Jonathan was originally from Chicago, where Fernanda’s grandfather and aunt both lived.

As we saw on the show, they moved together to Lumberton, which was a massive adjustment for Fernanda on multiple levels.

There were real doubts about whether Jonathan could settle down, including things never shown to viewers that suggested that he had very recently been dating.

In May of 2018, the two officially tied the knot in a Chicago courthouse.

However, that winter, things took a turn for the worse, which became apparent to fans when Jonathan and Fernanda spent their first married holiday season apart.

Weeks later, Jonathan opened his mouth, saying that he and Fernanda had been fighting and that she had said “things you can’t take back.”

Jonathan did, however, emphasize that what they’d had was real love — quashing unsubstantiated (and frankly bigoted) claims that she’d only been after a green card.

To hear him tell it, it sounded like Fernanda wasn’t ready for marriage and had maturity issues. (If you don’t want to deal with those, age-appropriate spouses are always an option)

Fernanda spent time with relatives here in the US after their separation, but made it clear — if not in so many words — that there was more to the story than Jon was saying.

In March of 2019, after less than one year of marriage, they were officially divorced.

That summer, Fernanda released a short documentary on YouTube, featuring interviews with eyewitnesses from her ill-fated marriage.

In the documentary, she accused Jonathan of cheating, and alleged that he verbally and physically abused her during their marriage.

During the divorce, Jonathan announced that he had requested a cancelation of his affidavit of support.

(This is part of any visa that allows an American to marry a non-citizen — it is a pledge that they will financially support their spouse, who fo course cannot legally workk yet)

On her own, Fernanda was soon able to pursue both a modeling career and high-end waitressing in Chicago.

Fernanda has gone on to find success as an Instagram influencer to her more than 400,000 followers.

She has also not given up on her love life, dating occassionally.

In fact, she publicly dated Bachelor in Paradise alum Clay Harbor. Love Fernanda or not, she clearly likes her men with ample arms. You have to respect that.

Fernanda is not done with her 90 Day Fiance career, either.

This spinoff will air on Discovery+ as an original series, documenting her life in Chicago as she continues her journey as a professional model.

Fans do not expect to see Jonathan featured on the show, though of course he may be mentioned.

Jonathan did not take long at all to move on.

While Fernanda was still processing the end of the marriage, he began publicly dating sports marketing agent Janelle Miller in June of 2019.

After one year of dating, Jonathan took to social media to reveal that the two of them became engaged in June of 2020.

On Instagram, he called it the “easiest decision I’ve ever made.”

Janelle is an age-appropriate match, as she and Jonathan are both 33. They are both currently living in Chicago.