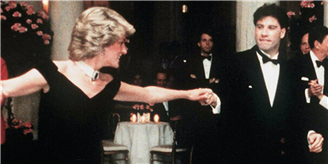 There are few photos more iconic than that of a tuxedo-clad John Travolta, wildly famous after starring in Grease and Urban Cowboy, commanding the dance floor alongside his partner, Princess Diana, arm outstretched in a deep blue velvet off-the-shoulder Victor Edelstein gown and a pearl strand choker centered with a massive diamond-encircled sapphire.

The photo isn't just visually striking, it's an entire era in an image, complete with then-President and First Lady Ronald and Nancy Reagan taking in the scene at the 1985 White House state dinner. In a recent interview with Esquire Mexico, Travolta opened up about the now-canonical photo and the moments that led up to its capture.

"I didn't expect to be asked to dance with her," Travolta recalled. "I thought: 'There must be a reason to do this and I better give it my all.' This meant guiding the dance well and seeking to have fun. That was the easy part, but introducing myself to Diana in the proper way, conveying assurance, and asking her to be my dance partner was a complicated mission."

He went on to describe the build-up.

"We are in the White House. It's midnight. The whole stage is like a dream. I go up to her, touch her on the shoulder, ask her to dance. She turns around and when she sees me she displays that captivating smile, somewhat sad, and accepts my invitation. And there we were, dancing together like in a fairy tale. Who could imagine that something like this is going to happen to you one day? I was smart enough to register it in my memory as a very special, magical moment." You and the rest of the world, John!

In 2016, Travolta told Good Morning America that dancing with the late royal was "one of the highlights of my life."