John McCririck, 78, reveals ‘gaunt and frail’ appearance was down to serious flu that left him unable to speak for THREE MONTHS

John McCririck has insisted he is ‘not dying’ and asserted that his ‘gaunt and frail’ appearance is down to a bout of serious flu during an interview on Monday’s This Morning.

The former racing pundit, 78, sparked concern among fans after appearing dramatically different while joining the panel for Big Brother’s Bit On The Side on Thursday evening.

John told Holly Willoughby and Phillip Schofield that his dramatic weight loss is down to a serious bout of flu, which left him unable to speak for three months. 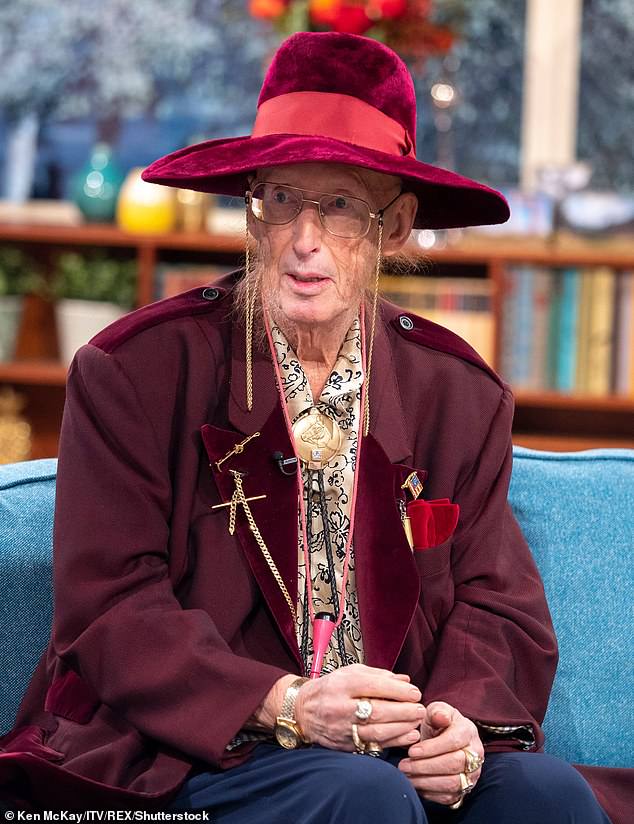 Candid: John McCririck, 78, asserted that his ‘gaunt and frail’ appearance was down to a bout of serious flu during an interview on Monday’s This Morning which was so serious, he was unable to speak for THREE MONTHS 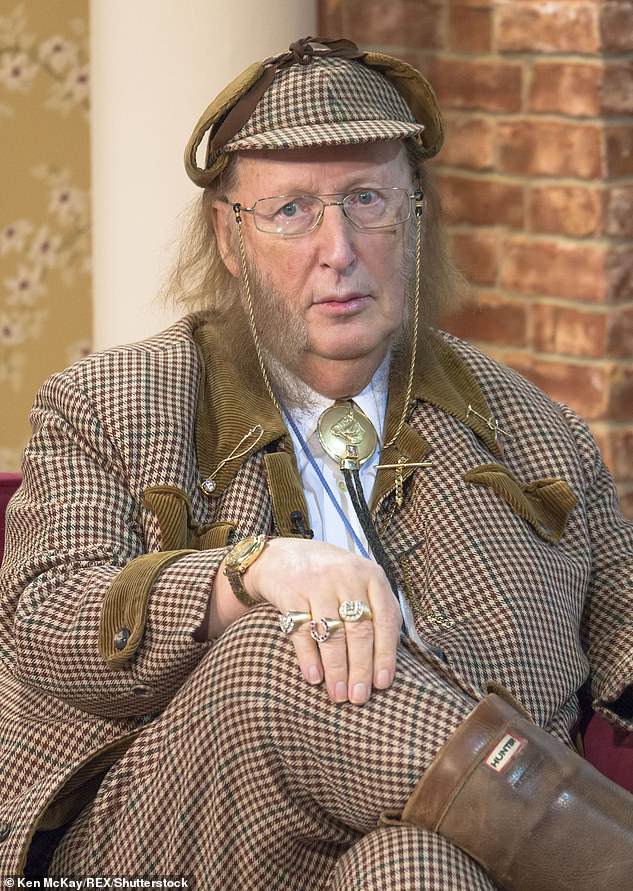 In the past: The racing pundit, 78, sparked concern among fans after appearing gaunt while joining the panel for Big Brother’s Bit On The Side on Thursday evening (pictured in 2013)

He said: ‘It flattens you, I couldn’t speak for three months. It floors you. You become all weak because of the antibiotics.

‘I am weaker and recovering slowly. A lot of people say “the flu, everyone has had the flu” but honestly, it puts you back and they fill you with pills.’

John previously told MailOnline that he hadn’t been aware of how much weight he had lost but that his wife had ordered him to the doctors weeks before.

He said: ‘I have had blood tests done, but they’ve said my blood pressure is perfect. It’s because my wife, The Booby, takes such good care of me.’

However, John had some choice words to say about Channel 4 who sacked him in 2009.

He also told MailOnline that his unemployment had made him ‘mope’ around the house and he felt sluggish ever since.

He said: ‘After Channel 4 sacked me, I felt depressed. What have I got to do with my day now? Watch Jeremy Kyle, This Morning, avoid Judge Rinder, Deal or No Deal… I have no purpose in life. 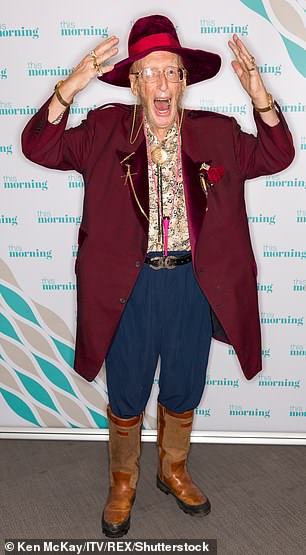 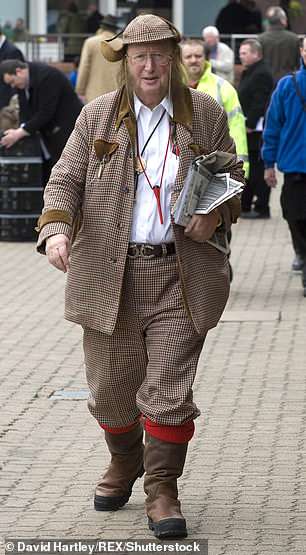 Concern: Yet John insisted that his dramatic weight loss is down to a serious bout of flu, which left him flattened and unable to speak for three months (pictured on Monday left, and in 2008 right)

‘I worked every day for my life, 50 years, never missed a day. Work comes first, even before family, if you don’t work, you can’t support your family.

‘I was very lucky, I worked for C4 racing for over 30 years,’ yet he added that losing his job contributed to his weight loss after his weight ballooned to 19 stone as he wanted to look ‘so much better’ for it.

He said: ‘I wanted to lose weight because old men can’t carry weight – so I was lighter already, but the flu meant I lost more weight. 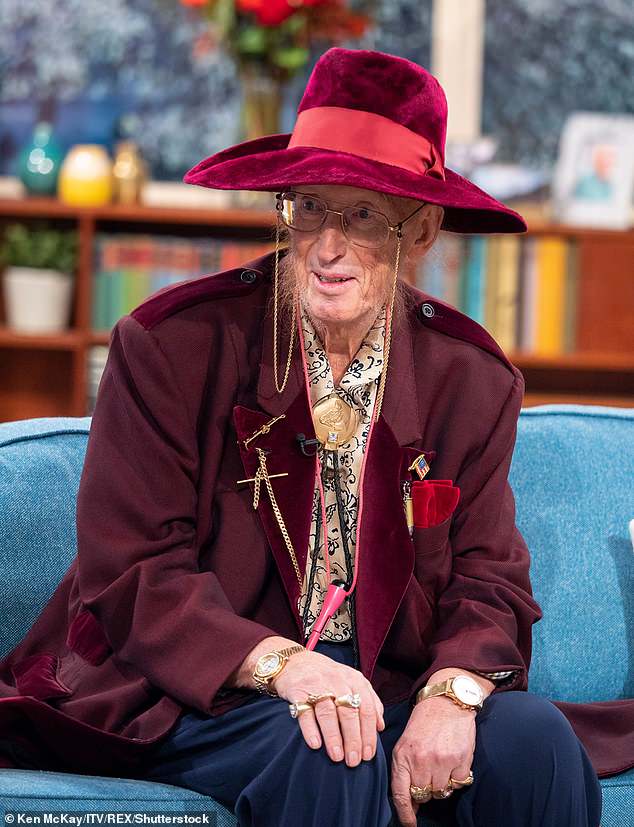 Scary: He said: ‘It flattens you, I couldn’t speak for three months. It floors you. You become all weak because of the antibiotics’ 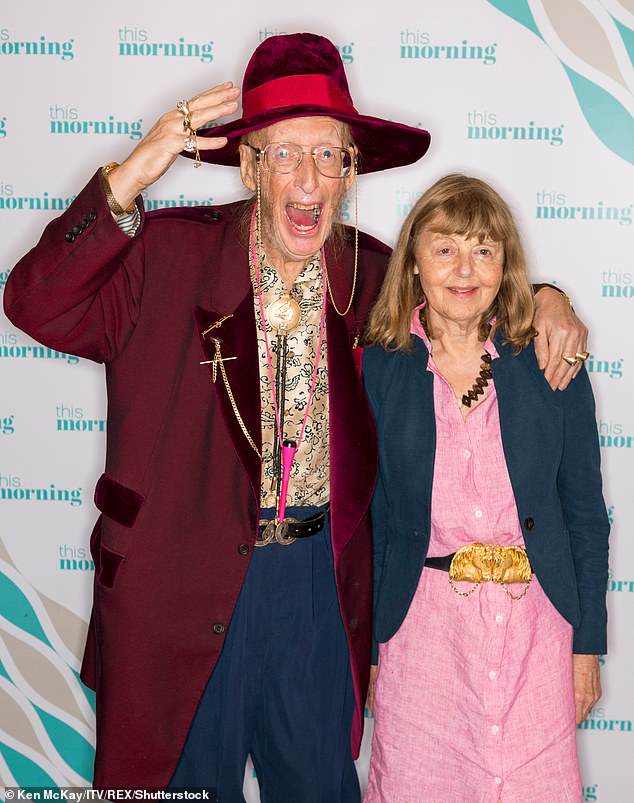 Doting wife: John also spoke about how supportive his wife, Jenny McCririck, who he calls ‘The Booby’, has been, he said: ‘The Booby should be the carer of the century!’ (pictured together)

‘I am saying to everybody, if you’re not well, set yourself a target that you will reach in three or six months time. Have aim, ambition, drive… mine is to work again. I want to be in it and work.’

John also spoke about how supportive his wife, Jenny McCririck, who he calls ‘The Booby’, has been, he said: ‘The Booby should be the carer of the century! She is fantastic what she does for me…I’m not the easiest patient!’

After the racing star’s appearance on Thursday’s Big Brother’s Bit On The Side, he exclusively spoke to MailOnline hours after the show to address his health issues as he insisted his dramatic weight loss was born of his controversial Channel 4 sacking in 2013.

Admitting he suffered with depression following the shock dismissal, he confirmed a combination of his reaction to the sacking and a ‘serious flu’, which culminated in a chest infection, resulted in his dramatic weight loss and slimmed-down frame. 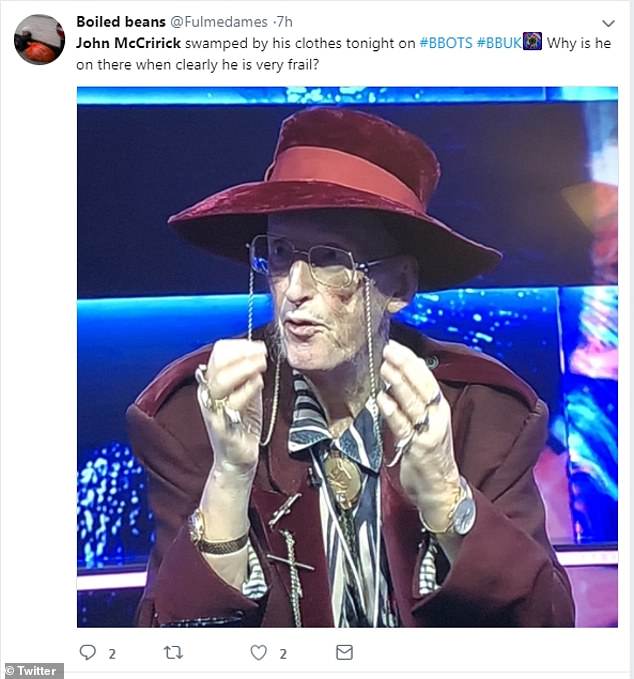 Worries: John sparked concern among fans after appearing gaunt while joining the panel for Big Brother’s Bit On The Side on Thursday evening

In his typically controversial manner, John chatted animatedly on Big Brother’s Bit On The Side, yet fans were thrown by his physical appearance as he seemed remarkably slimmer than the usual look that has graced screens for 40 years.

Swarming Twitter, viewers voiced worries over the controversial TV personality, with some fans insisting he looked ‘ill and gaunt’ – leading to discussion over his health – before his representative told MailOnline he was recovering from a chest infection.

In response to the shock from concerned and devoted viewers, a representative for John told MailOnline: ‘What started with flu in the New Year led to a serious chest infection, he is recovering well but slowly’

Swarming Twitter, viewers wrote: ‘I’ve never liked John McCririck, but it’s sad he looks so ill #BBBOTS… Shocking to see such a transformation. His health must not be good at all… John McCririck looks really poorly bbbots… 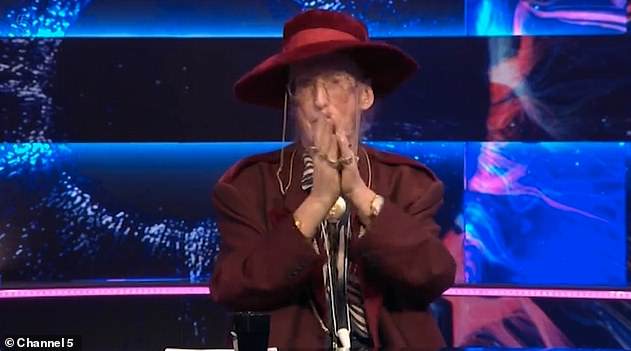 Shocking: The 78-year-old pundit, who appeared on CBB in January 2005, spoke exclusively to MailOnline hours after the show to address his health issues 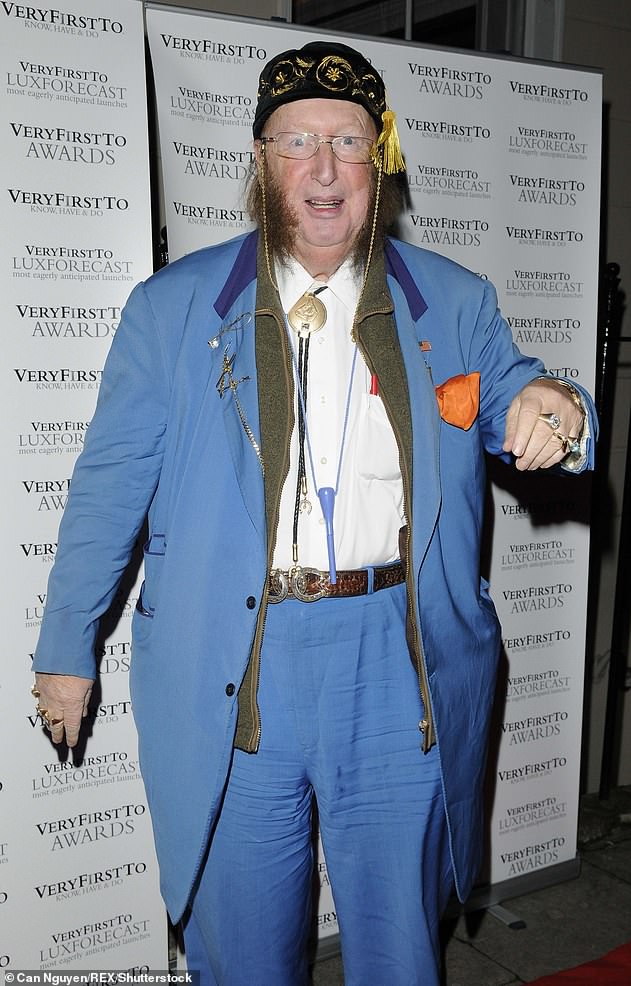 Healthier: Admitting he suffered depression following the shock C4 dismissal, he confirmed a combination of his reaction to the sacking and a ‘serious flu’ which culminated in a chest infection, resulted in his dramatic weight loss and slimmed-down frame (pictured in 2013)

‘John McCririck swamped by his clothes tonight Why is he on there when clearly he is very frail?… John McCririck looks so frail and ill . Such a shame #BBBOTS #BBUK’.

Responding to the worries, John told MailOnline his weight loss was down to his sacking: ‘I was sacked by Channel 4, I was depressed, I lost my appetite… I had no motivation, no purpose in life. I’ve never missed a days work in 50 years.’ 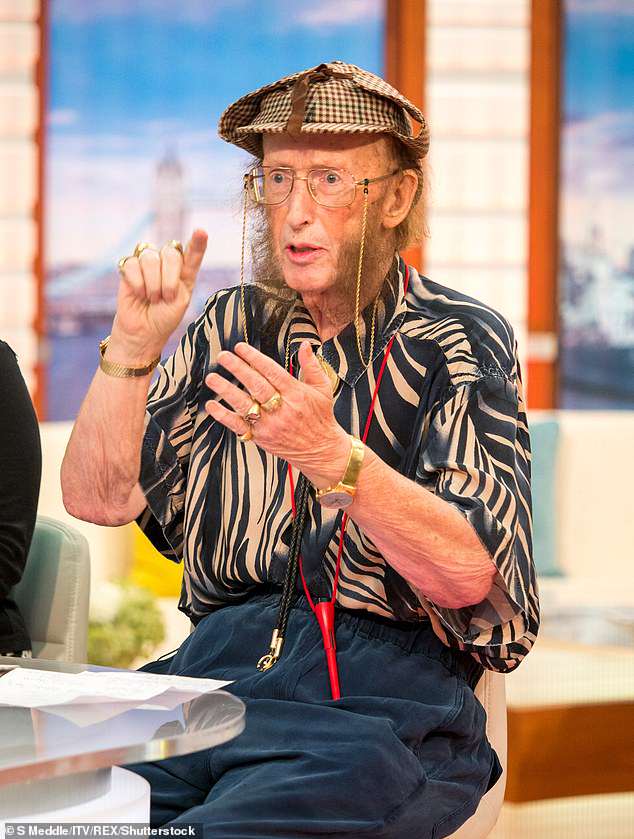 Shocking: John showed off his slimmer frame on Good Morning Britain in April

In 2013 John launched legal proceedings against Channel 4 seeking damages totalling £3million after his axing from the station’s new racing output however he lost out on the case later on.

The star, who was arguably the best known face on racing with appeal reaching far beyond the boundaries of the sport, was one of many not retained when C4 changed company producing racing output from Highflyer to IMG Sports Media.

Others who lost out included John Francome, Alastair Down, Derek Thompson and Mike Cattermole.

But John, who became famous for reporting from the betting ring in his own unique style, took his removal hard, alleging the decision was ageist and that he has suffered public humiliation. 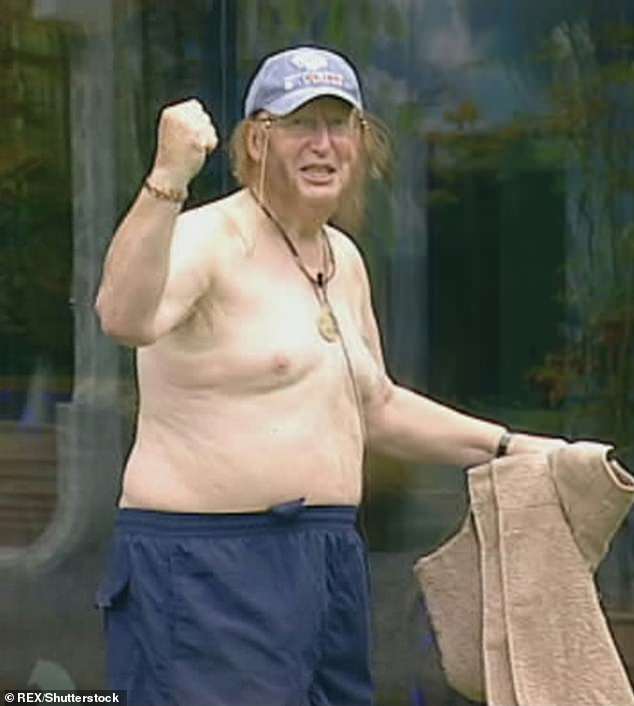 Way back when: John exhibited a fuller figure in the past yet has slimmed down since (pictured on Ultimate Big Brother in 2010)

Earlier this year, John revealed that his bout of ‘serious flu’ spread to his legs and voice: ‘I had terrible flu and it really got to my legs and voice ‑ it was awful… It’s hard to recover from and I’m not fully fit. But I’m Cheltenham-bound.’

In April, the TV legend revealed he has thrown himself into a health kick after his weight ballooned to 19 stone, as he proudly confirmed he had shed three stone after cutting down his portions and ridding his diet of potatoes.

He then joked: ‘I’ve cancelled my marathon next year! I don’t believe in exercise – just swimming and aqua aerobics.’ 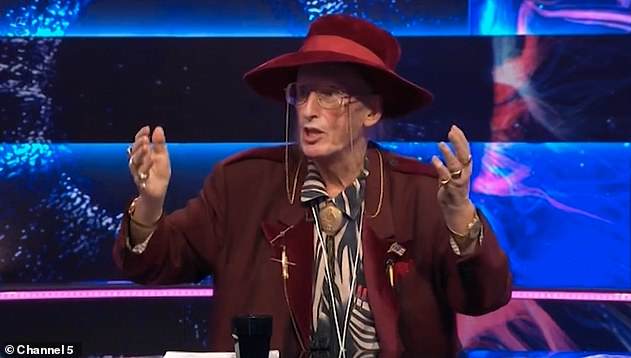 While his illness has been a factor in his weight loss he admitted he had wanted to lose weight as he said: ‘You don’t seen old men on walking sticks being able to carry the weight – bar Winston Churchill.’

John rather morbidly joked about death as he insisted he did not want a funeral and revealed he had given his wife – who he calls ‘Booby’ – his instructions for his death.

He said: ‘I don’t want a funeral, I think it’s selfish. I want a cremation and to be buried at Alexandra Park Racecourse – Booby knows what to do!’

John collapsed at Cheltenham Races in 2013 due to stress. After his collapse he was taken to hospital. His representative assured fans at the time: ‘John fully intends on being back on the course tomorrow.’ 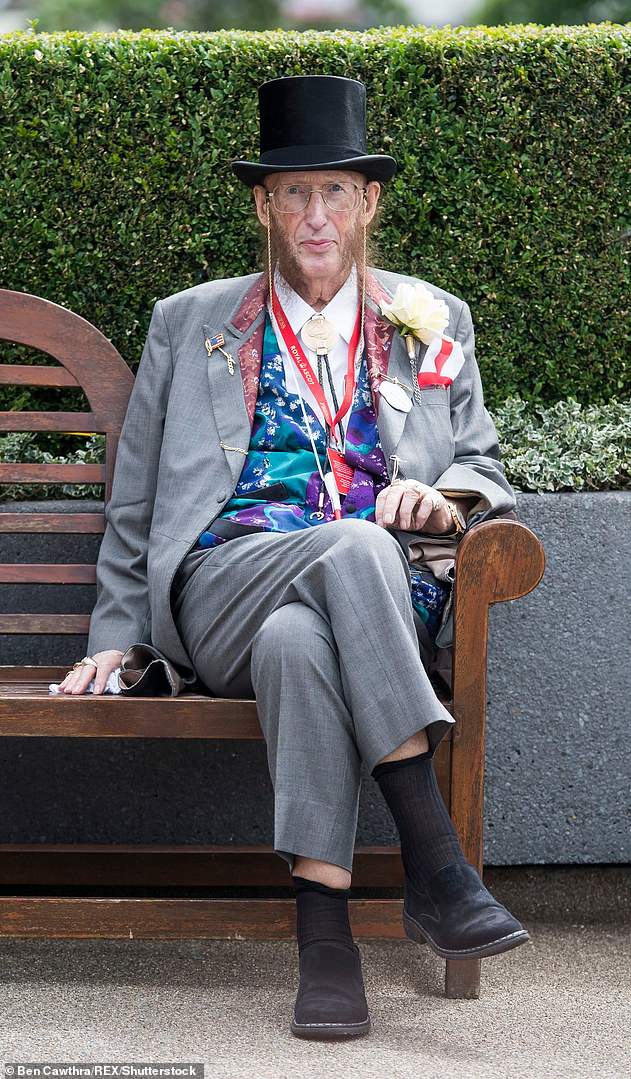 Changing looks: In June (pictured), John was looked svelte, however he appears to have lost yet more weight as he appeared on the show 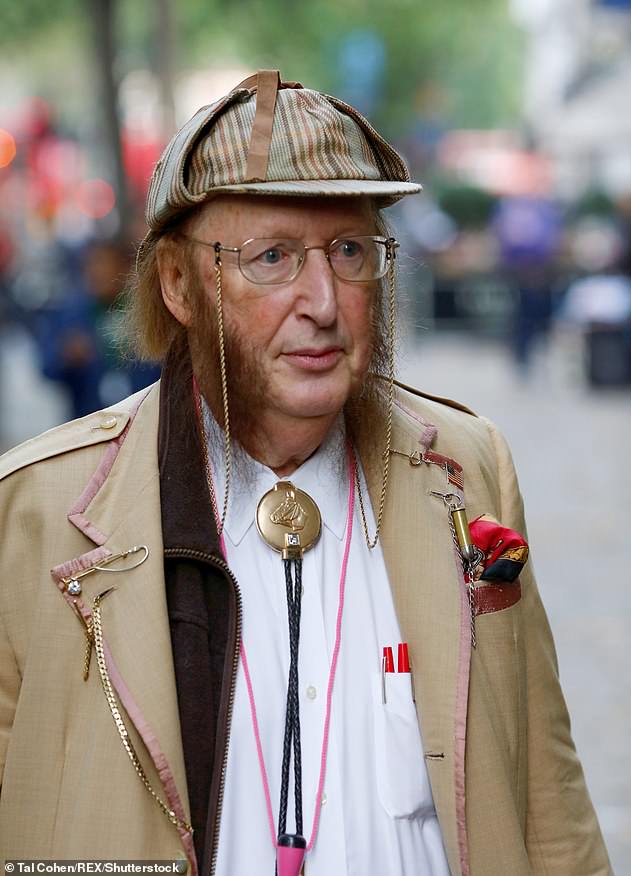