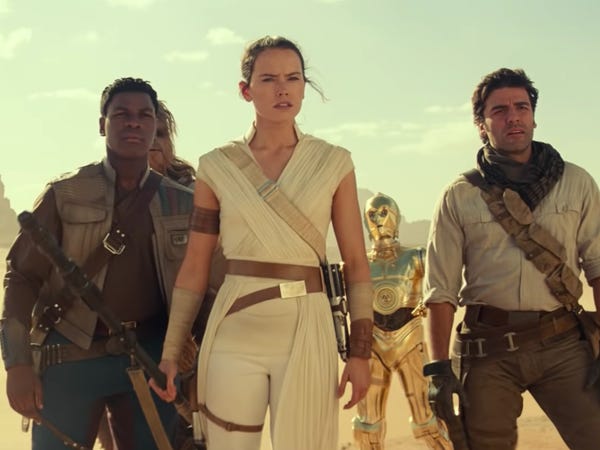 John Boyega recently revealed that his criticism of how his character was sidelined in the latest "Star Wars" trilogy has led to talks with Disney.

The British actor told The Hollywood Reporter that he had a conversation with a Disney executive following his criticism, shared in a September GQ interview, of how he and Kelly Marie Tran's character Rose were marginalized in "The Rise of Skywalker" after having such large roles in "The Last Jedi."

"It was a very honest, a very transparent conversation," Boyega told THR. "There was a lot of explaining on their end in terms of the way they saw things. They gave me a chance also to explain what my experience was like."

Boyega added that he felt it neccesary to speak up to hopefully change the environment for Black actors and other actors of color coming up in the industry behind him — in front of the camera and behind it.

In his GQ interview, Boyega was blunt about his experience working on the latest chapters of the "Star Wars" saga.

"What I would say to Disney is do not bring out a Black character, market them to be much more important in the franchise than they are, and then have them pushed to the side," he said. "It's not good. I'll say it straight up."

Boyega seemed to be the face of the new trilogy, leading up to the release of 2015's "The Force Awakens." His face literally is the first we see of the new era of characters when the trailer came out. We watched as Boyega's Finn escaped the life of a First Order Stromtrooper and built a bond with Rey (Daisy Ridley).

In the second part of the trilogy, "The Last Jedi," Finn gets an entire subplot in the movie with Rose as they seek out a way to save the Resistance as it's being hunted down by the First Order. But when "The Rise of Skywalker" came around, the third installment of the trilogy released in 2019, Finn was pushed to a deep supporting role and Rose was nonexistent.

Boyega felt Disney had a plan all along, and Finn and Rose weren't apart of it.

Boyega will next be seen in the Amazon series, "Small Axe."