If you watched “Tiger King” while quarantining, you are probably already well aware of how controversial Joe Exotic is. For those who haven’t watched, allow us to fill you in. Exotic ran a roadside zoo in Oklahoma. Activists alleged that Exotic was breeding tigers for profit so that tourists could take photos with the cubs. They also posited that Exotic was starving and mistreating the animals. Exotic responded by becoming obsessed with one-upping a woman named Carole Baskin, who seemingly made it her life mission to end his zoo. To make a very long story short, Exotic was eventually indicted for hiring a hitman to drive across the country and kill Baskin, per KOCO.

People were divided on Exotic; some thought he made great TV, while others thought he was abusive and manipulative. These days, Exotic is behind bars, serving a 22-year sentence for his murder-for-hire plot. Just because he’s locked up, doesn’t mean he’s stayed out of the news, though.

Exotic found himself in the headlines for some not-so-savory comments about the death of his former friend and co-worker, Erik Cowie. Read on to find out what he said. 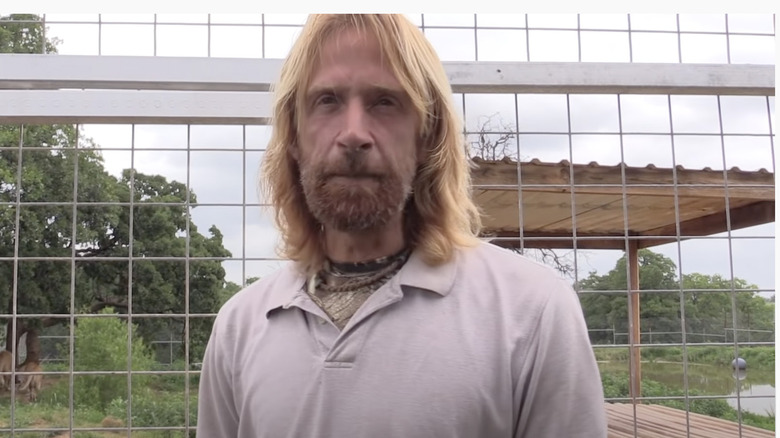 Fans of “Tiger King” were saddened to learn of the sudden death of series star Erik Cowie on September 7. The death appears to be alcohol-related, per TMZ.

One person in particular was certainly not sorry, though: his former boss, reality star Joe Exotic. When speaking to Daily Mail, Exotic claimed that he had paid for Cowie to attend a rehabilitation program several years ago, though the program did not appear to be a success. The relationship turned sour when Cowie’s testimony helped secure Exotic’s prison sentence. It seems as though Exotic hasn’t gotten over that slap in the face just yet. Exotic explained that he most recently saw Cowie at his trial. “He was [sitting] up there lying his a** off because he needed to kiss Jeff’s [Lowe] a** to stay at my zoo and to be the big cat hero on Netflix,” Exotic told the outlet.

According to Exotic, the last thing Cowie said about him cemented the end of their friendship. “He’s going to die in there,” Cowie said during a “Tiger King” interview, per the Daily Mail. “So good riddance.” Exotic couldn’t help but point out the irony of it all. “I’m sad he is gone but the last words he spoke about me backfired,” he said. “Never wish evil upon anyone else. God is watching.”

If you or anyone you know is struggling with addiction issues, help is available. Visit the Substance Abuse and Mental Health Services Administration website or contact SAMHSA’s National Helpline at 1-800-662-HELP (4357).