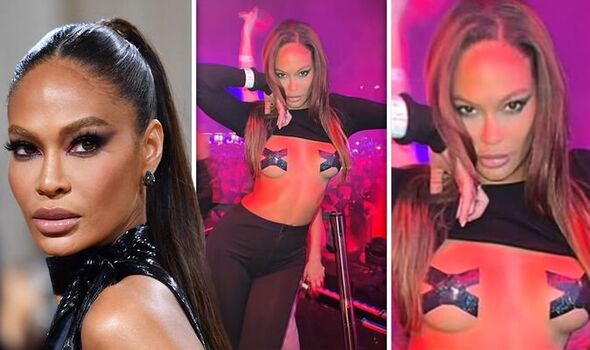 Joan Smalls, 34, posted the edgy picture, which appeared to be taken inside of a large music venue, in view of her 5.2 million Instagram followers. The supermodel was wearing a crop top so short that it showed her exposed breasts, with only some tape to cover her modesty.

The star could be seen wearing a black, long-sleeved crop top, which exposed her entire chest and torso.

Joan didn’t hold back with the racy pic, leaving only a pair of black crosses over her nipples.

On her bottom half, the style icon wore a pair of tight black leggings and wore her hair down and poker straight.

She finished off her look with a dramatic makeup look, which included bold winged eyeliner and some contouring.

“X marks the spot,” the star captioned the eye-catching snap.

The star wore a barely-there crop-top and some tight black leggings for the photograph.

The model preserved her modesty with some black tape over her nipples.

Joan Smalls is a Puerto Rican model and television personality

The fashion icon ranked at number eight with an estimated over $3 million in earnings.

The star could be spotted in a patterned white dress and black cowboy boots at the event.