Jennifer Aniston looked effortlessly chic leaving a Beverly Hills spa on May 26 — just one day before the much anticipated ‘Friends’ reunion airs.

Jennifer Aniston wore a calf length black slip dress and a pair of fuzzy olive green slides for a pampering appointment on May 26. The 52-year-old star, who is known for her style, looked like a million bucks when she was photographed leaving the salon.

She wore her signature honey blonde locks long and straight, past her shoulders. She also wore a black lace mask, a black purse slung across her shoulder, and a pair of large black sunglasses to shield her eyes from the California sunshine — and the waiting paparazzi.

Jennifer visit to the salon comes ahead of a big night for her and her former costars. Friends: The Reunion on HBO Max will air on May 27 and Jen, along with the other original cast members: Lisa Kudrow, 57, Courteney Cox,  56, Matthew Perry, 50, David Schwimmer, 53, and Matt LeBlanc, 52, are all returning.

Although the show  ended in 2004, it remains just as beloved as it was two decades ago. Fans are thrilled that it’s got a new home at HBO Max — and now a reunion special. The highly-anticipated special comes a full year after its intended release because of the COVID-19 pandemic.

The Friends cast is getting a huge pay day for the reunion special —  as much as $3 million each, according to The Hollywood Reporter. Of course, they each got $1 million-per-episode in the final two seasons of the show’s 10-season run, so the big paychecks are no surprise. The NBC series ran from 1994 to 2004.

One guest star that won’t be returning is Brad Pitt, 57, who appeared on the original show back in 2001.  The actress called her ex-husband “Mr. Pitt” when talking about her favorite guest stars.

“And Mr Pitt was wonderful,” Jennifer told the entertainment outlet while promoting the upcoming reunion along with her co-stars Courteney and Lisa, who called Brad “fantastic.” Jen agreed and responded, “Fantastic” while Courteney simply nodded her head and said, “Yep.” 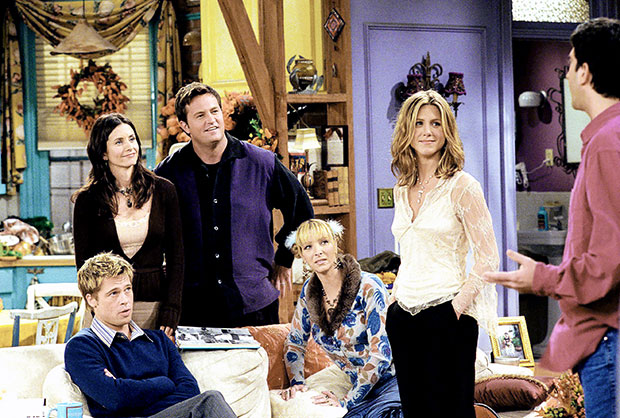 This isn’t the first time Jennifer has made it clear that there is no longer any bad blood between the exes, who split in 2005. Brad made a special appearance at her 50th birthday bash in 2019. Then they reunited at the 2020 SAG Awards and shared a sweet moment. And more recently they worked together again for a virtual reading of Fast Times At Ridgemont High.