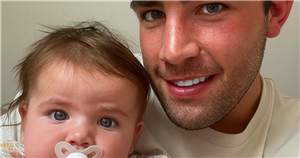 Jack Fincham has said he's "sick" of "lies" as he hit back at accusations he doesn't see his daughter Blossom.

The Love Island star, 29, shared a series of lengthy posts on Instagram after his ex Casey Ranger wrote a long statement about Jack's alleged "non-existent" relationship with his one year old daughter Blossom.

Jack's former flame Casey posted the statement on her Instagram page, where she said she needed to "say my piece" to "release some of this heaviness".

Within the statement, Casey accused Jack of "manipulating people into thinking that he's a victim" by claiming she is "to blame for him having no relationship/no contact with my daughter".

Casey alleged that her pregnancy with Blossom was kept private "in case it ruined his career" and she was "told repeatedly I couldn't mention his name", which she said had "devastating effects" on her.

She added that Jack was "nowhere to be seen during the whole of my pregnancy" and "made it VERY clear that he didn't want to be involved".

But, once their daughter was born, Casey alleged that Jack sold "photos of me to the newspapers behind my back" which she said is "all for his own gain".

Casey also claimed that Jack "stole" from her and Blossom and "refuses to pay support for his daughter".

In the long list of accusations, Casey also accused Jack of cancelling plans to see his daughter and only using the little girl to "boost his public profile" and posting images of her on social media without her permission.

She also added that Jack didn't buy Blossom a Christmas present or card and is "now requesting a DNA test.

Following the lengthy post, Jack shared his reaction on his Instagram account. He began by sharing screenshots of text messages, one of which appears to show Casey asking for daughter Blossom's money to be paid "in cash" rather than in her account.

Meanwhile, a second appears to show Jack asking to have his daughter, before Casey replies with a lengthy response saying she "needed a level of trust before even contemplating you having her alone".

Jack then went on to share photographs of toys and baby products, which were taken on 21 December last year.

He wrote in image at the start of the post: "Actually getting sick of this now . And the lies , and the constant hate I get about a certain subject . Please look at the date on these pictures I'm going to post and look at the date .

"About I didn't get my daughter a Christmas precent. There is 2 sides to every story but I choose to keep it private and not say anything .

"Another lie from a certain controlling individual . Now I'll expose this one but I'm not doing this anymore . Publically slandering someone then getting constant hate do you know what that does to someone's mental health?

"And people wonder why people are dropping like flies. Due to suicide if you don't like me or have an opinion just unfollow me and don't say anything.

"This person hates me and is bitter Because a one night stand didn't workout we were never friends she came back alone to my house with others and her plan didn't work out now she wants to ruin me. The truth always comes out."

In the caption Love Island star Jack added: "Please read to all those people who just decided to hate me and believe one person.

"Bitterness is clear to see . And clear proof on yet another lie from a BITTER SCORNED post from a certain someone.

"This isn’t my style airing my dirty laundry but there’s only so much hate I can take due to one person . I physically can’t take it anymore."

OK! has contacted Casey and Jack for further comment.

For all your updates on Jack Fincham and many more stars, sign up to our daily OK! newsletter.