With everything moving to streaming services right now, live TV might seem like it’s an archaic thing of the past. But don’t count it out just yet — there’s still programming, like sporting events and award shows — that aren’t easy to find or are even available online, and first-run primetime shows are still broadcast over the airwaves before making their way on to any streaming platforms.

That’s where a good TV antenna comes in. These days, the best digital TV antennas can pick up all of the major networks in hi-def, 4K quality. It’s more than just the three major networks too, as the best 4K antennas can pick up over 50 channels. No more rabbit ears reaching up to the ceiling, or coat hangers and tin foil or whatever other old-school tricks you used to pick up something resembling a signal. These antennas bring a picture that’s crisp and clear, and are HD and 4K capable.

What Makes a Good 4K Antenna?

Easy Install: The latest 4K antennas are simple to install too, even the ones that look big and clunky. Hook it up to your TV’s co-ax jack or sometimes USB, stick the unit to a window (or stash it on a console), and start watching.

Amplifier: While they all perform the same basic function, some digital antennas are better than others and offer extra perks. A unit with an amplifier will probably cost a bit more, but if you’re in a rural area, it can make a huge difference. Also if you do get one with an amp, we recommend that it comes with an on/off switch, since running the amplifier all the time can actually mess up a signal if it’s in short range.

Signal Strength: Keep in mind that things like signal strength and clarity can vary, depending on where you’re located and how far you are from the nearest broadcasting tower. Even if an antenna says it’s 4K, that still depends on the signal that’s being broadcast, not the antenna itself. As far as channels, an antenna boasting that it gets a high number like 60+ may be technically correct, but a lot of those will be repeats, radio stations, or just unwatchable.

There are plenty of good 4K antennas available, and different models too if you don’t want a big black thing blocking your window. We’ve selected a sampling of our picks here, so you can start watching live TV without being beholden to the behemoth cable companies.

1. U MUST HAVE Amplified HD Digital TV Antenna

Sometimes a name says it all: If you’re looking for a quick, simple, and affordable antenna, this one’s a “must have.”

The flat antenna features a powerful amplifier signal booster with Crystal Clear Filter Technology for picking up signals over a wide range – up to 200 miles. It also filters out cellular and FM signals, which means a crisper picture, lower noise, and usually around 50 channels.

This supports 4K and 1080p, and older TVs too (though you might need a converter box). Setup is easy, and an 18-foot cable should provide enough slack to get near a window. 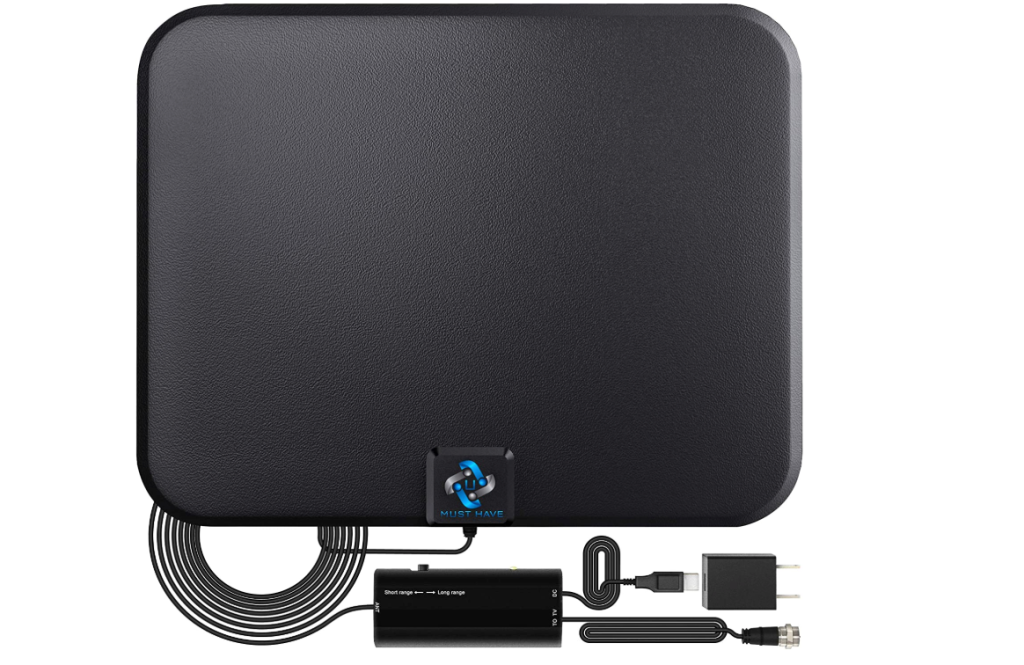 On the outside, it may look nearly identical to many of its competitors. But Vansky’s Digital HDTV antenna outperforms the hordes of other similar antennas. The number of channels is nicely high, at 57, and the picture quality is clean and glitch-free up to 1080p.

It comes with an amp booster that’s detachable whenever you don’t need it, but acts as a huge help with a maximum range of 120 miles when on. It’s also weather-resistant, protected against lightning and anything else interfering with signals. Setup is easy too, and with a 16.5-inch cable, reaching the window should be no problem. 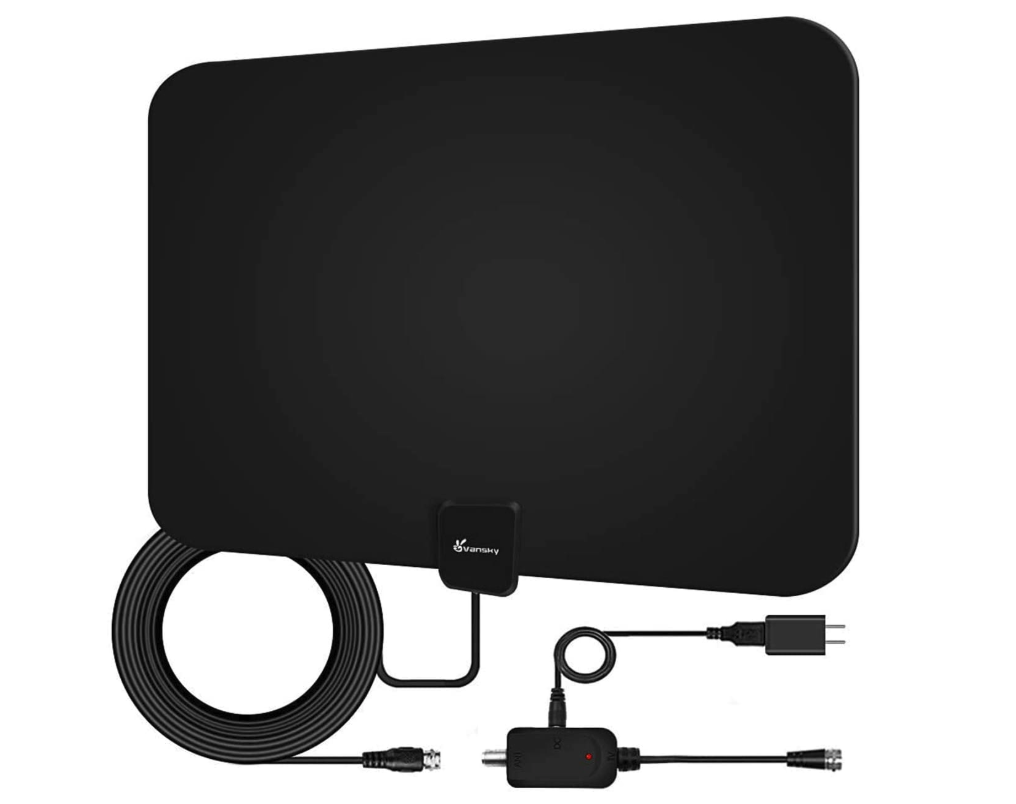 If you’re living somewhere with natural obstructions like mountains, or near other heavy-use electronics like a microwave, consider this powerful little antenna.

WeGuard’s stingray-looking unit packs a built-in Smart IC Chip inside, as well as CleanPeak Filter technology to filter out cellular and FM signals for a cleaner picture with low noise.

The amplifier does a nice job of picking up signals and putting up a clear quality, with a range of 90-120 miles, high-gain and low error, and about 48-60 channels. 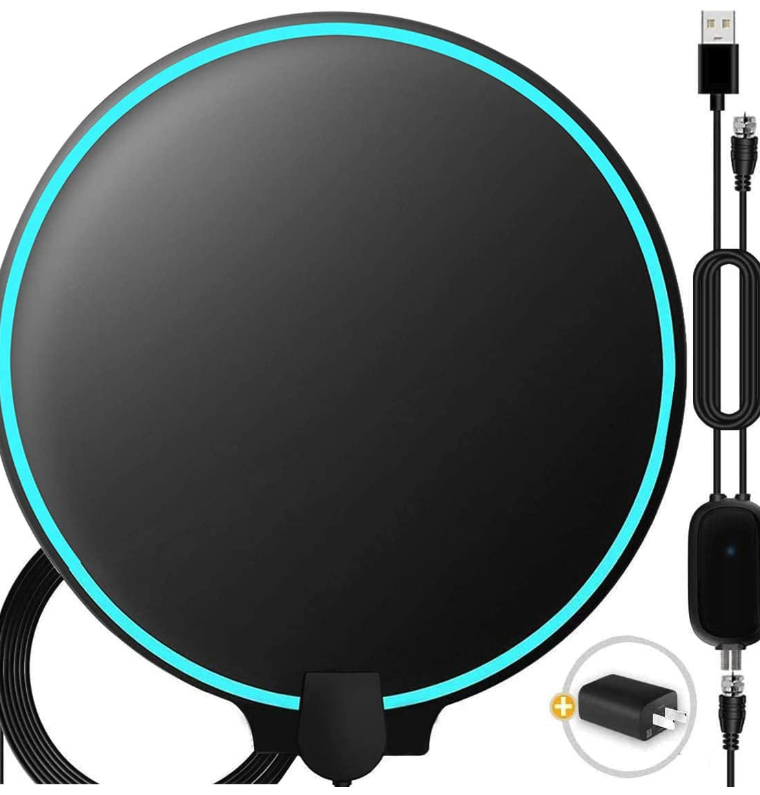 There’s a few simple but really convenient alternate options for setting this up. Usually these units need to go in a window, which can be an eyesore and block out sunlight. But GE’s clever fix here gives you the option of laying it flat, along with a stand to set it on a sill too.

As far as picking up broadcasts, there’s a helpful LED Signal Finder light meter to show you how strong of a signal it’s getting at any given second, which especially comes in handy when finding the best spot in your house.

The highest number of channels any user reported was 65, slightly more than the others here. But at a much higher price than its competitors, there wasn’t much improvement in picture quality – it’s the LED Signal Finder that’s the real star of this show. 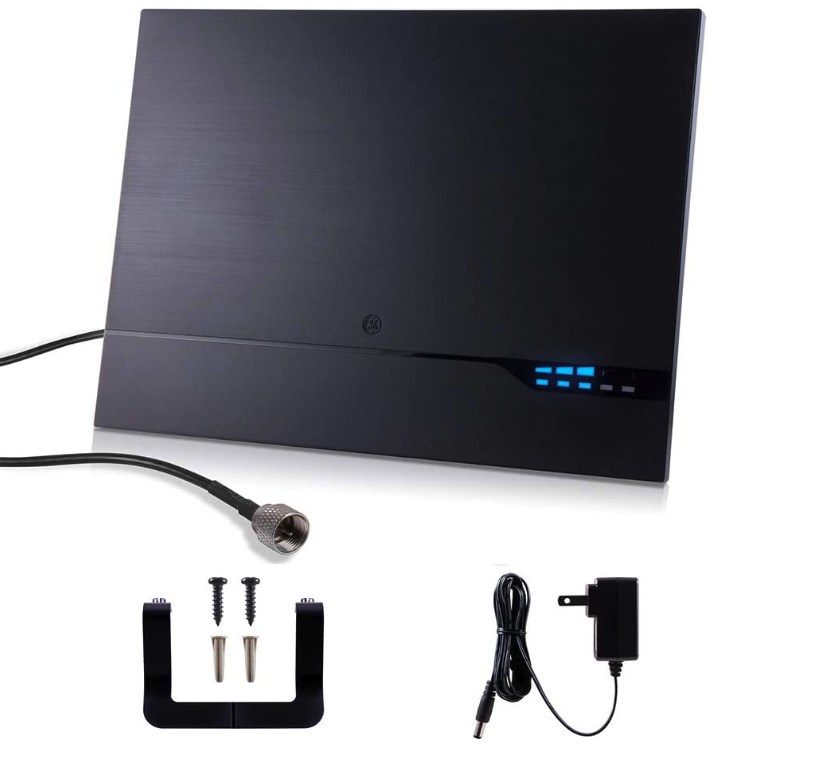