With faces full of excitement, the Duke and Duchess of Cambridge’s three children started a new term at Lambrook School on Wednesday.

Prince George, nine, Princess Charlotte, seven, and four-year-old Prince Louis joined a settling-in session with their parents Prince William and Kate, arriving  in a car driven by the Duke from their new Windsor home, Adelaide Cottage.

Dressed in the independent school’s smart summer uniform, the royal children walked hand in hand with their parents to the entrance, laughing and chatting along the way.

Acknowledging Louis’ first day in full-time education, William stroked his hair reassuringly. The three siblings are all attending the same school for the first time, with Louis starting in reception class in the pre-prep and George and Charlotte joining in year five and year three respectively.

They were greeted by their new headmaster Jonathan Perry.

“Welcome Your Royal Highnesses,” he told them, to which Kate replied: “Very nice to see you.”

Mr Perry then shook each child by the hand, saying: “Welcome George, welcome to Lambrook. Hello Louis, welcome.”
Both boys wore smart navy shorts and socks, black shoes and  a green and white checked shirt, their hair neatly combed to one side. 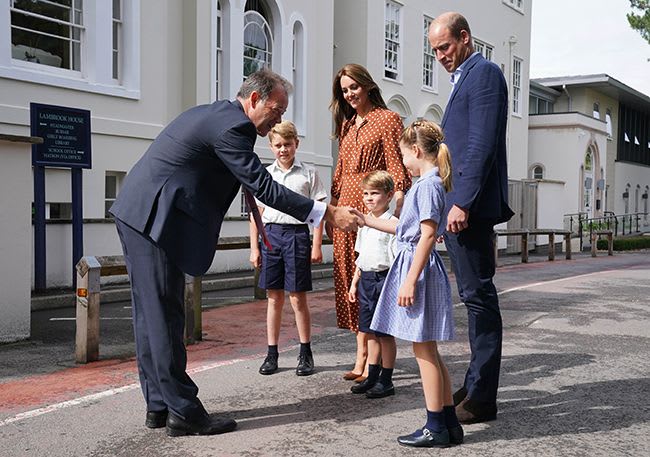 The children were greeted by the headmaster

Turning to their sister, who wore a navy gingham summer dress, navy socks and black shoes, he added: “Welcome Charlotte – lovely to have you with us. We’re very excited about the years ahead. Are you excited children – looking forward to it?”

The Duke replied: “They’re looking forward to it. They have lots of questions.”

On the eve of their first full day of term on September 8, the family of five managed to avoid the rain for their short public appearance in front of just one photographer, one reporter, one cameraman and a Kensington Palace press officer.

“It’s a lovely day again,” said the Duchess, noting that it had been nice every time they visited during their long search for the perfect school for their children.

Louis will join his siblings in education for the first time

As they walked up the steps into school together, they were greeted in the doorway by the headmaster’s wife Jenny Perry, who said: “Welcome back to Lambrook.” William replied: “With all the gang.”

The Cambridges spent around 90 minutes inside, meeting fellow new starters and their families.

George, Charlotte and Louis were shown their new classrooms and met their teachers again while William and Kate enjoyed refreshments with fellow parents.

A source said the Cambridge children were particularly excited to all be going to the same school for the first time. “They’re really excited about starting a new school together, and I think mum and dad are too,” said the source.

Make sure you never miss a ROYAL story! Sign up to our newsletter to get all of our celebrity, royal and lifestyle news delivered directly to your inbox.