Halsey has issued an apology after she came under fire for posting a picture of herself on social media that many deemed insensitive.

The singer, 26, joined in on the current "post a photo of" trend on Instagram, which allows followers to request others to post photos of themselves at various milestones in their lives.

When Halsey was asked to share a photo of herself at her "lowest point," she reportedly posted a mirror selfie and captioned it, "TW: ED, ask for help." "TW" is an abbreviation for "Trigger Warning" and "ED" stands for "eating disorder."

Halsey later removed the image and admitted she was wrong in posting the photo without providing a "sufficient" warning.

HALSEY SLAMS 'ELUSIVE' GRAMMY NOMINATION PROCESS AFTER SNUB, SAYS IT'S NOT ALWAYS ABOUT 'MUSIC OR QUALITY'

"I am very sorry for posting a photo of myself depicting my struggle with ED without a sufficient trigger warning. I was very nervous to post it and didn’t think properly. I had positive intentions," the "Bad at Love" singer wrote on Twitter.

In a second tweet, the hitmaker said she would be taking some time off social media.

"with that being said im gonna log off now because this has turned into something I am not emotionally equipped to handle for the time being. I hope that’s okay," she added.

Halsey has opened up about her past struggles with her body image, as well as her diagnosis of bipolar disorder. While gracing the cover of Marie Claire magazine in 2018, the singer recalled spending 17 days in a psych ward after a previous suicide attempt.

"I gained, like, 30 pounds," she said, noting she was placed on medications at the time. "I was throwing up in school. I spent my whole adolescence medicated."

The artist noted that she turned to music to cope with her struggles early on. She can play the violin, guitar, piano, clarinet, mandolin, cello, among other instruments, and today still shares photos of her impressive art skills on social media. 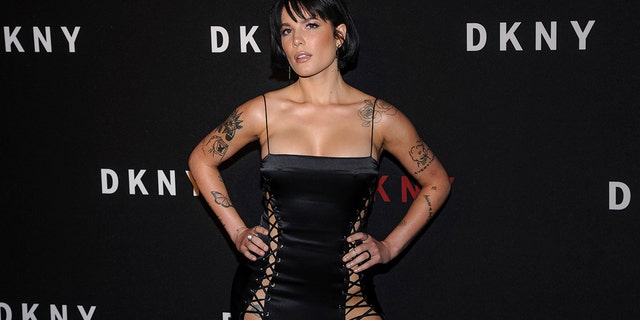 "No jokes right now. I have dedicated my career to offering education and insight about bipolar disorder and I’m so disturbed by what I’m seeing. Personal opinions about someone aside, a manic episode isnt a joke. If you can’t offer understanding or sympathy, offer your silence," she tweeted in July.

"A lot of people you know probably have bipolar disorder and you aren’t aware of it," she continued. "Taking this opportunity to make offensive remarks and [vilify] people with mental illnesses is really not the way to go…this is the exact triggering s–t that causes people to keep quiet about it."

"You can hate someone’s actions or opinions without contributing to stigma that damages an entire community of sometimes vulnerable people all for a couple of laughs," she concluded.