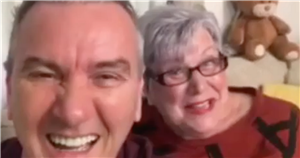 Gogglebox star Jenny Newby paid tribute to her TV co-star Lee Riley after she missed a large part of the last series due to an unconfirmed medical condition.

During her time away from the show, the rest of the cast of the Channel 4 series scored a BAFTA back in May in the Best Reality and Constructive Factual.

After having to miss the awards show due to surgery, Jenny had now paid tribute to her friend Lee and their BAFTA win with a sweet video shared from her garden via the pair’s joint Instagram account.

"I know I couldn't be there with you on the night. I swapped my evening gown for my theatre gown, and my black stocking for surgical stockings and my silver clutch bag for a catheter bag.

"But all in all, I never got to say thank you for the support you gave me through the pandemic when we were filming.

"The things that you did for me. Like, giving me that 9ft by 5ft bedroom, wall to wall walls, and enough room under the bed for my Pot Noodle and a packet of fags.

"And the one shelf you gave me in the kitchen. And I had to stand on a step to get to it.

"But I just want to say, all in all, Lee, thank you very much for being my bezzie mate and I'm hoping to see you soon."

Fans of the hilarious duo were clearly delighted to see Jenny looking in better health, with one user replying: "Your friendship is so special – if everyone had a pal like you two – the world would be a better place!! Long May your friendship last."

Another commented: "Definitely friendships goals right there, get well soon Jenny. Can't wait to see yous back on tv soon, always a good laugh when yous are on x."

The two best friends have been fan favourites on the series since 2014, butthey've been absent of lateafter Jenny had an operation.

Addressing Jenny’s absence, Lee told the Daily Star at the daytime BAFTAs: “She is not very well.

"She is having an operation, a mini one, but she is recovering well though.”

He went on to say that his partner-in-crime had been invited to the prestigious event, but it fell on the same week as her surgery appointment.

"You can’t turn down an NHS operation down, can you?” Lee went on to quip. “But she is doing well."

Jenny has since issued a health update herself, and thanked everyone for their warm wishes.

In a video shared to the pair’s Instagram page, Lee began: “Hi everybody. You’ll never guess who I’ve just bumped into…” before panning the camera round to show Jenny.

“She’s out of hospital!” he went on to exclaim, as Jenny proceeded to thank everyone.

“I just wanted to thank everyone for their kind get well wishes,” she said.

“They really cheered me up. Thank you very much, and I’m looking forward to seeing you all in series 20.”

Lee went on to confirm that the next series will air in September, and wished everyone a joyful summer.